Rather than give up on my exercise regime during Lockdown #2 (a mistake I made during Lockdown #1), I resolved to walk the Thames Path in sections from Hampton Court to Canary Wharf. Walking is less efficient as exercise than swimming. According to my tracker, today's walk burned only the calories I would usually expend in swimming for an hour. In fairness, I have done better than that on other, longer sections – but all the walks took more time too. I have never enjoyed physical exercise. I only do it as medicine. Walking costs too much for my taste.

Work on the Tideway (aka the "Super Sewer") and the presumably-furloughed employees who usually open the gates through Docklands housing developments subject to daylight hours rights of way, meant I spent too much time out of sight of the river. Today this was often just a Thames-proximate Path. On a couple of occasions I took the opportunity to go down alleyways that led to a river view, only to have to come back to Wapping High Street, or wherever, to resume my non-riparian stroll. 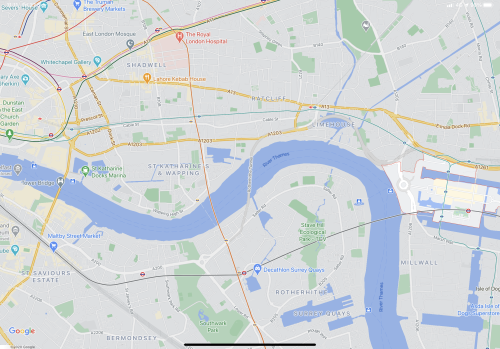 I was surprised by how smart Wapping is. Huge amounts of money have clearly poured in since the days when locals bemoaned the closing of the docks post-containerisation. There are elegant wharf and warehouse conversions; some of them by Housing Associations so not (intentionally) occupied by the wealthy. Even the social housing (always detectable by the state of the balconies, even though the cars outside – often Jags and Mercs these days – are no longer a reliable signal) seemed mostly very pleasant. Rather than an area of deprivation, it looked (after considerable redistribution of wealth, presumably) a very agreeable community to live in. It's nice to know someone's enjoying the proceeds of my lifetime of work, I suppose.

I spent some of the most fun times of my life working on the negotiation of lease for a major initial tenant in One Canada Square (the Canary Wharf Tower). The banks who financed the development had committed to lease there themselves, provided x,000 square feet was let to other banks by a deadline. I suppose they wanted to make their borrower prove that the Wharf would work as an extension of the City of London. Our client was a bank and its lease hit that limit – as it turned out – in the last hour before the deadline. Our client's negotiator didn't know the details, but had sensed that something was up. He procrastinated to get us as close as possible to the deadline to maximise his negotiating advantage. Such was the landlord's desperation in the end that our lease was ridiculously favourable. I had a lot of fun devising imaginative, plausible (but impossible) demands to help him delay.

Passersby may have thought I was appreciating the architecture when the sight of that building made me smile today, but in truth I was remembering the only time I was paid to take the p*** for months. I know some of you think that's what lawyers always do,  but I promise you that was the only time for me!

My health club opens next Wednesday and I have two swims booked, b.v.*, already. So my walking days are (I hope) over. I can't say I have enjoyed the activity itself, but I have enjoyed getting a sense of the shape of London. I had been to many of the places before, but had not fully understood where they were in relation to each other. Walking through a city will fix that for sure. In fairness to walking, you can combine it with photography – and you can get to see new things worth photographing. Swimming's no good from that point of view. Still, I shall be going back to it – and motoring to my photoshoots!

The photos from the final day are here. I hope you enjoy them.

Day 5 on the Thames Path: Vauxhall Bridge to Tower Bridge

This is one of the shortest sections of my planned walk, but richest in photo-opportunities. From the MI6 Building to the Houses of Parliament, Lambeth Palace, the more famous bridges, City Hall and (more poignant to me) the various buildings I worked on when I was a young property lawyer.

My then firm was neither one of the genteel Inns operations handling aristocratic estates nor one of the corporate City outfits where "dirt lawyers" are looked down on. Our reputation was on the aggressive side (snobs were known to call us "spivs") but I believe it was the best place to learn the ways of the racy, exciting real estate business that is still (even after almost a decade of retirement) the world where I feel most comfortable. It was my experience at that firm that made me feel far more a real estate person than a lawyer.

I wouldn't bore you with the details of old deals even if professional ethics permitted, but I remembered them fondly today in all their long-forgotten details. There is one building featured in today's photographs which has such complicated subterranean boundaries that I'd bet I am still the only person who fully understands them. I remember the reaction of HM Land Registry when I suggested to them that they could only be properly represented by a hologram.

There's a life lesson that I reflected on today though in how little all those things we agonised and fought about matter now. I missed key moments of my daughters' lives to deal with issues the people fighting over them have long forgotten. I hope my daughters are wiser than I was when their time comes.

The walk barely needs describing. The most casual visitor to London will recognise most of the landmarks featured so the captions to the photographs will suffice. If you can't name a prominently-featured building, then I took a fee for legal advice in relation to it!  The photographs are to be found here and I hope you enjoy looking at them as much as I enjoyed making them.