After a restful night, I struck camp in the early light and launched my little boat again from the dock at Millers Pond. I had two more stamps to collect and most of my travel would be on water. The guide-notecard advised me to rez a small boat as there were many low bridges to pass before I reached the sea, but I decided to continue with my little Bandit 22 LTE racing boat; shipping the mast when necessary. She has a nice turn of speed and I knew there were some nautical miles to cover.

I shipped anchor and sailed North under the first bridge of the day. 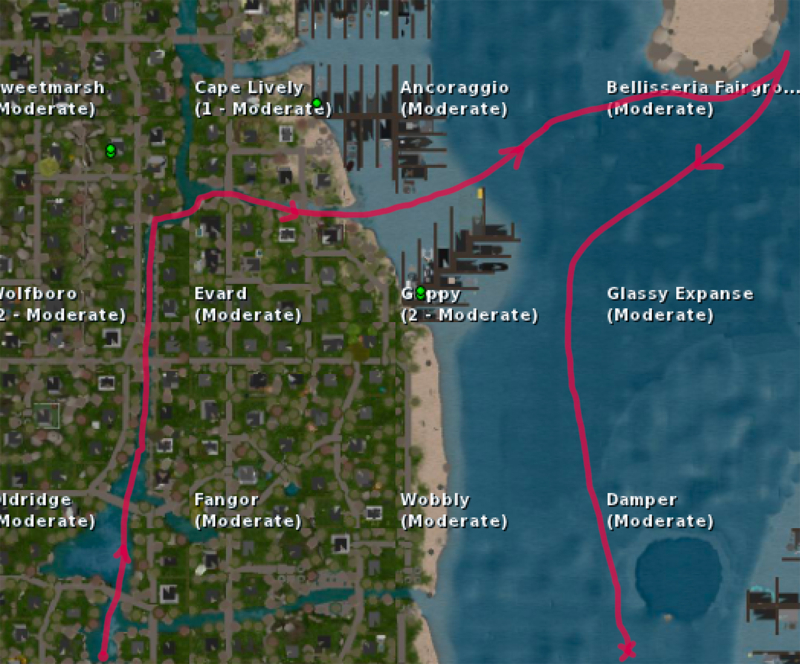 Happily the World Map was working well for once and I could plan my route. Along the river, out to sea, North to the Bellisseria Fairgrounds and back South to Picards Wharf. I sailed gently North and then East through Oldridge, Wolfboro and Evard (under all the promised bridges and perhaps a couple more) until I was among the houseboats in Guppy. I headed out to sea and sailed North-East through Ancoraggio and Bellisseria Bay to Whiskey Bay and the fairgrounds' dock. Most Bellisserians will have visited there as it's a favourite location for our continent's big events. It's also one of my favourite places to practice landings in my helicopter!

After so long in the boat, I was happy to stretch my legs. After a short walk, I found the stamp terminal near a rocky outcrop. The instructions were clear enough and now I had five stamps in my passport. Just one more to go!

Returning to the dock I ignored the water taxi to the mainland and launched my sailboat again, heading West, South-West and then South through Bellisseria Bay, Ancoraggio, Guppy, Wobbly and Stiff Drink (who names these places?!) to a a tall, thin, somewhat Freudian rock protruding from the sea at Picards Wharf. This (so the notecard told me) marked the end of the quest.

I found the rock and moored my boat. Now it all became a bit more challenging, at least for non-Merfolk! As the guide-notecard put it:

One way or another you are going to get wet now. If you are brave put on the supplied adventure gear. Alternatively if you have scuba or snorkel gear, put it on. Merfolks ignore all the above. Worst case scenario take a deep breath and hold your nose.

It was time for a magical transformation as Fenella became FINella and swam down to the sea bed. Among the ruins of another house built by the Moles on poor foundations, I found the entrance to an underwater cave. All the guide-notecard had to say was;

Walk into the cave and try to find the stamp terminal. The Merfolk maintain this terminal and it might not be pristine after all this time in the water. So no disrespect to the Merfolk but it might not be so easy to find. This is the last stamp, did you think we'd make it easy? Get the stamp and you've completed the quest! Explore deeper into the caverns and grottoes if you are brave enough, but be warned some never return! 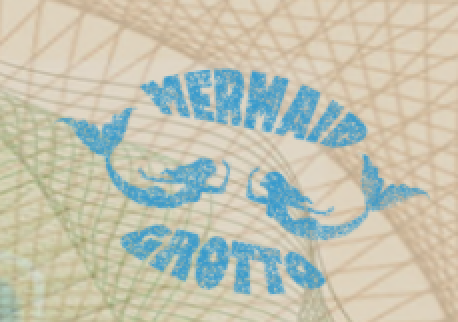 The Moles had placed a terminal where it would sink and rust, yet were trying blame us Merfolk (for obvious reasons not famed as electricians) for its poor condition! I ignored the insult and swam around until I found it.

I must give credit to my BBB colleagues for their workmanship. The screen was flickering but somehow, though it didn't look too great, it worked! I had myself a "Mermaid Grotto" stamp. We citizens of the sea need no passports to our own places, but I just laughed at the idea. We won't begrudge any legger who makes it safely to and from those caves the pleasure of a bureaucratic reward!

Since I got my passport when I moved to Bellisseria last year, I have enjoyed collecting the BBB's stamps. All Limoncello Art Gallery locations have stamp terminals and as a Bellisserian institution (our Main Gallery is over Dave's, houseboat) we are happy to fly the flag at our mainland annexe too.

More art galleries, clubs, GTFO depots and docks, starships, Tardises and other destinations around the grid (the locations don't have to be in Bellisseria though you must be a Bellisserian to have the passport) should have terminals. They are one more reason for people to visit your location. What's not to like?

I would argue that they make particular sense for art galleries because the urge to collect is something their owners and their visitors have in common!

Unlike most bureaucracies, we have a talented designer on our staff and will craft your stamp for you, based on your logo or your requirements. We at the Limoncello Gallery liked the BBB's design for our stamp so much that with permission we adopted it as our logo. This little quest was a particularly fun way to add to my collection of stamps however. Apart from the Mermaid Grotto at the end, the instructions were clear and the terminals easy enough to find. When the route opens officially later today, I recommend you try it – if you have a Bellissarian passport.

And if you don't, but are entitled to one, why don't you head over to the BBB and fill out the form? Of course there's a form; we're bureaucrats!  We're not very good at bureaucratic delay though, so you may be pleasantly surprised by how soon it arrives.

The route officially opens at 12 noon SLT today when the BBB inaugural Linden Location Stamp Rally begins. Pick up your travel trunk now with all the kit you need (including a boat, adventure clothing and a route map HUD) at the BBB Office. Open it in readiness but don't rez anything until the Rally begins! My journey began at one of my favourite spots  – Campwich Lodge – where I collected the first of the unique stamps. I am always puzzled why more events on the Linden Continent aren't held in this beautiful building - available as a public space for Bellisseria residents to use.

Following the instructions provided to me, I headed to the nearby jetty and launched my sailboat at the rez zone. If you don't have a boat of your own, one is provided for the quest (along with other equipment) so don't worry. Sailing under the bridge at Porthole, I headed East along the river and out to sea before turning North towards Light of Aurelia.

Passing under the bridge between the lighthouse island and the mainland I reached Puffin Head and the entrance to the Panamole Canal. At only 750 metres, it's shorter than its 82 kilometre counterpart in RL; the Panama Canal. However it's only slightly narrower and while the RL canal costs a minimum of $800 for even the smallest boat to pass, the SL version is free of charge. Many people (well OK, some Moles) think this makes it far superior!

As soon as I entered the Donovan region, I disembarked and continued on foot. The directions in the draft notecard went a bit wrong at this point and I noted some corrections to send back to the office. Soon enough though, I found the nearby bridge over the Canal and collected my second stamp.

From here the instructions recommended a wearable vehicle, so I mounted my trusty steed Shadowfax atop the bridge and headed North to the crossroads. Following the instructions led me to the road into Kirbee and on to Millbank, where I picked up the third stamp. I am not quite sure what wonder of Bellisseria it celebrates though. Appropriately, the stamp is a big fat question mark!

I rode across Millbank's parkland. There's a railway under construction and various animals grazing including goats and (surprisingly) camels! I took the road North-East to Miller's Pond where, on a dock, I collected my fourth and final stamp for today.

There's a rez zone by the jetty for taking boats onto the water, but I dutifully followed the notecard guide's suggestion instead. I took one of the nearby rubber rings and paddled out to discover – shall we politely say – one of  the Moles' less successful builds.

It was time to make camp and rest before continuing the quest.