Another special stamp to collect
Surviving the Slenderman 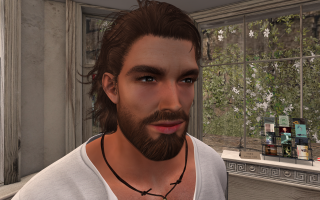 We were excited to read Cranston Yordstorm's new blog (h/t Prudence Anton for telling us about it). It's called Passport to Bellisseria – Cranston Travels the Grid, and is an SL travel blog about his experiences collecting visa stamps for his Bellisserian Passport.

Fenella, our editor, was lucky enough to catch up with him today. He kindly agreed to stop by the Limoncello News and BBB Gazette office in Campbell Coast to be interviewed. She asked him how he got into Second Life and what he does here.

I can't even remember how I was first introduced, but it wasn't through this avatar: my original was Cranston Matterhorn and he's going to be 15 in November – I keep him more for nostalgia value than anything else. A friend heard me singing one day and suggested I try my hand at it ... so I grabbed a suit and started making the rounds

Cranston is "a singer with a Jazzy, Swingy, Bluesy sound" and performs around the grid as well as having his own club. It dates back to 2010 and has been in a number of places over the years but now nestles in the middle of his region, Redwood Grove. He does "a fair bit of modding" and describes his region as his "current pet project aside from the live singing". He currently has an application in to the BBB for a passport stamp to issue there.

He also runs The Toothsome Wench a Tudor Tavern in Englesdorf, one of the new Bellisserian alpine regions with chalet homes.

Asked what gave him the idea for his new blog, he said;

I started collecting the stamps first. I knew I wanted to blog about something and also to explore more of SL so I figured it was a good marriage of the two. It also sort of reminds me of Geocaching in RL.

We at the BBB hadn't thought of the geocaching comparison, but we certainly want our passports and stamps to encourage people to explore SL. Cranston's blog is an example of exactly the response we were hoping for! As he went on to say,

When you go to great places such as Campbell Coast, you never know what you'll find when you explore past the initial landing spot

Asked if he plans to slog through every BBB stamp location he said;

So far I don't see why not! It's a travel blog so I suspect I'll also find other ways to explore plus every once in a while I'll throw in something personal. I've also been exploring the SLRR in Bellisseria but haven't yet explored mainland SLRR much. If I had to sum up the blog I guess I'd say 'It's a travel blog with eyes wide open to experiences off the beaten path'

It's certainly a blog we'll be following with interest at the BBB, and we hope you will too. Thank you Cranston for being such a perfect gentleman and so generous with your time. Good luck on the SL road!

Doc and I have been following CranstonTravels blog enthusiastically. It's great to read about the experiences of others who visited the places we've enjoyed and also a great scoop on new places to check out which we haven't explored yet.

Thank you! He's really getting into the passport stamp collecting, which is great. He's also an excellent singer – I heard him perform tonight.

I'm a RL Geocacher! and Doc is looking forward to giving it a whirl in RL too ♥
We love to explore and Geocaching been a great means to explore some very interesting places while socially distanced during the pandemic.

Who knew that's what the BBB was doing?! Enjoy Bjoyful!