In 2017, Christi Charron with a few of her friends, came up with the idea of a weekly "Grid Drive" for SL drivers. The plan was to use a HUD – working rather like a satellite navigation system - to complete a mission travelling from one waypoint to another. The routes can involve many vehicles and methods and completing one correctly usually earns a reward. The current Drivers of SL grid drives can be found here.

Before the BBB took over his Slife, our CEO BÓÒ (boo.rojyo) was an active participant and has been on dozens of grid drives. He has recently rejoined the group.

Xarabethe of Drivers of SL took part in our first BBB Rally. She enjoyed it so much she approached BÓÒ to  suggest a combined BBB/DSL event, which is now scheduled for May 22nd. As is the Drivers of SL's usual practice it will run twice – at 11.30 am SLT and again at Midnight, in order to accommodate drivers from different time zones. 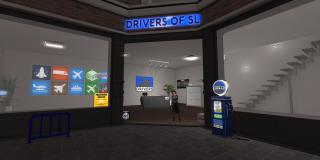 The route is twice the distance of the first rally, involves an additional location and driving a train! Rather than following directions in a notecard, the impressive Drivers of SL HUD will guide you. Bellisserian Passport holders can collect stamps as usual, but anyone can take part using a special stamp HUD. Even if you have some of the stamps in your passport from the previous rally, you can still use the stamp HUD to make a new collectors item!

The Drivers of SL HUD includes such neat tricks as an SL Experience that drives automatic teleports. It will also guide you to rez zones to bring out of your inventory the vehicles you need. If a participant lacks a necessary vehicle, the marshals can either supply them or point them to free ones – so nobody need be left out. The DSL HUD will also direct you to additional rez zones if you have an accident and need to re-rez.

We're called Drivers of SL, but our grid drives have used just about every form of transportation imaginable. The DSL HUD is brilliant, and really makes for an interactive and enjoyable experience. I try to make it function as something of a "travel companion," pointing out interesting sights and sharing some SL history and trivia as we make our way along. I try to choose routes that showcase some beautiful sites, and also give the driver a keen sense of where they are (what continent they are on at the time, for instance).

Drivers of SL often do rallies with vehicle designers, GTFO and other groups so this is part of their regular programme. It's the first with the BBB however and we hope it won't be the last. We think that collecting the passport stamps adds another dimension to a grid drive!

Looking forward to this Drive immensely! Thanks for sharing the news