NOTES FROM A BUREAUCRAT: A DAY IN THE LIFE OF CHIEF INSPECTOR EUSTACE BEEB

The name is Beeb, Eustace Beeb, I'm the new Chief Inspector of Passports for the Bellisserian Bureau of Bureaucracy, and I'm licensed to stamp.

When Great Aunt Beeb told me she was pressuring the founder of the Bellisserian Bureau of Bureaucracy into giving me employment at that esteemed institution I was overjoyed. Of course Great Aunt Beeb tends toward un-Beeb like exaggeration. I'm sure what she actually meant was that she was persuading the founder of my unique skills and natural bureaucratic abilities. Her being on the board of the BBB wasn't a factor at all either. My skills shine through regardless.

I can tell you Mrs Beeb and I were overjoyed when we heard I'd got the job. Merriment reigned in the Beeb household. There were extra biscuits with our evening Horlicks that night! Were it not for the relaxing and therapeutic attributes of collating and indexing our beetle collection of an evening I'm not sure Mrs Beeb and I would have slept a wink the night before I joined the BBB. 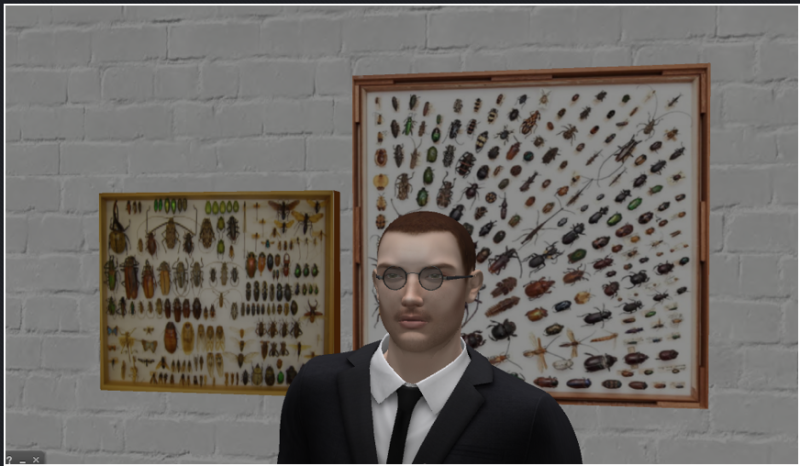 Mr Beeb at leisure with his beetle collection

It saddens me to say my initial introduction to the Bureau was rather disappointing. The total lack of rigour was astounding. Worst still there were no uniforms! Casual dress is their "modern" approach. Fortunately I have my own uniform and I'll wear that until I persuade them of the error of their ways.

Being introduced to all the staff was an excellent opportunity to educate them all on proper methods and approaches. I certainly did my utmost to rid them all of that the 'customer is always right' nonsense. I gave them some useful instruction on a rigorous and unyielding approach to all aspects of bureaucracy.

After my day with the other staff the founder, not a man of great intellect, did at least have the insight to admit my unique skills were wasted on teamwork. He insisted my duties should be as distant from other staff as possible. He obviously saw the danger of their lax, shoddy ways polluting my bureaucratic purity. Nevertheless I believe my short encounters with the team planted seeds of bureaucratic perfection.

I was to be what I'd modestly describe as an elite, shock tactic soldier for the BBB. Not for me the daily "customer facing" drudgery of my colleagues. "Customers?!" At best they are users; subservient to the might of the BBB.

I was stationed at the BBB HQ. Not at a desk like some ordinary bureaucrat, but in a mobile role. Mostly in the garden, weather permitting. Imagine the shock on the faces of the subservients at my shock tactic passport controls the moment they entered the garden area!

Yes it is a little galling I'm to spend as little time in the office itself as possible, and time can drag a little hiding behind bushes for hour upon hour. The joy of stamping a passport however is what I imagine a fisherman feels when hooking a prize fish.

The passport users though are a shockingly shoddy lot. I like to add what I think are instructive notes in their passports. They sometimes appear to be under the insane delusion I'm there to make friends. I'm here to add rigour to their lives.

My mission may be long and lonely, but bureaucracy is my life!

The lovely Bijoux offered us a new location in the Campbell Coast Harbour at Emyniad and we have moved our embassy there. We look forward to welcoming you and to continuing to represent our home continent to its friends in mainland Corsica.

BBB Gazette Editor, Fenella, is particularly delighted by the move as the new embassy is a short walk from the offices of the other publication she edits – The Limoncello News.

The BBB Embassy entry on the destinations database for SL Time Lords will now take you to the new location, though the old embassy remains open until our lease expires. The old location now features on your Tardis navigation systems as Artists' Village. That will probably disappear when the old embassy finally closes.

IF YOU WONDERED WHY WE BECAME BUREAUCRATS FOR FUN, HERE'S YOUR ANSWER (FROM FUTURAMA)

We have two new and one updated location this week. The new ones are Linden Department of Public Works (LDPW) public spaces built by our beloved Moles and will appear on a new page of the online travel guide. The first is the beautiful treehouse in Randelsham Forest – one of those public areas in Bellisseria not used for events as often as they should be. We really recommend you don't just TP in and grab the stamp here. The Moles have done a wonderful job of creating a peaceful, restful, rustic environment. There is much for you to enjoy.

The second is the Ring of Fire volcano. The stamp for that location is our 100th and the design reflects that milestone moment. Treat the volcano with due respect please. Try not to get too close. The Moles' sense of realism, coupled with their sense of humour, has led them to ensure such rashness will have consequences!

Legal Note: The BBB accepts no liability for injury, loss or embarrassment arising from your visit to this (or for that matter to any other) location.

The third location this week is our new embassy in Corsica. There is no new stamp as the terminal has simply been relocated from the old embassy. Collect the stamp if you don't have it, but visit anyway. We like our new home on the mainland and hope you will too. It may just be in the most bucolic setting for an embassy in diplomatic history.