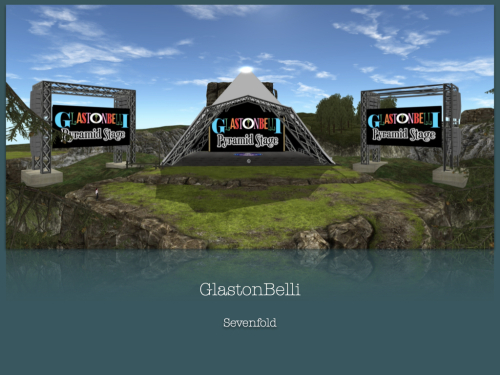 Have you been wondering where the GlastonBelli Pyramid Stage has gone?  Fear not, gentle reader.  It has merely moved to a new location and is now open for you to get that elusive BBB stamp!

In writing about its return, I wanted to get the history right, so I spoke to the people who created it, Bjoyful and Doc Rast. Doc saw a documentary about the Glastonbury Festival in Somerset UK, which had its 50th anniversary in 2020, and was inspired to create an SL build of the iconic Pyramid Stage.

It was used for a successful live music concert at the Bellisseria Fairgrounds in February 2020. Hence its SL name (Glastonbury in Bellisseria = GlastonBelli, get it?) That was followed by another concert festival in June 2020.

So this isn't the first time that GlastonBelli has moved.  From the Fairgrounds, it went to the Sunstream region on Campbell Coast in mainland Corsica. Due to design changes and the need for more space, it then moved to its previous location in the Erazor region. There it shared space with the Campbell Coast Artist's Village and Aerodrome. Now it's on formerly abandoned land in the nearby region of Sevenfold, landscaped in the fine Campbell Coast signature style of architect/designer Kitten Mills.

The new GlastonBelli Pyramid nestles in the midst of a lush redwood and pine forest, with a mountain overlook featuring a replica of Stonehenge. That ancient monument is part of the traditions of the RL festival as concert-goers often begin their pilgrimage to Glastonbury (or Glasto as the regulars call it) from there. There are hopes that GlastonBelli will again host music concerts in SL.

Mulder (alex.alas) has joined the secretariat as Design &Distribution Assistant to Sun. He will help her in making stamps, distributing terminals and checking locations etc. Our other new staff member, Teresa Firelight, will initially assist Coal in the development of a secret special project currently in development. Please join us in welcoming them both.

The number of places in Second Life where you can have your passport stamped continues to increase. This week, we have three more in the airports and ports category of the Online Travel Guide and two in the other category. The others  in this case are private residences in Fantasseria; our first locations on Bellisseria's fantasy sub-continent.

Sry Fenella, can you please correct in your article that I didn't do anything on Sevenfold. there's no prim of mine on the whole sim, it was all done by Cranston. And I don't like to take credit for anything!!!!

Thanks for your comment. Kitten. The article (written by Cranston himself) does NOT say that you DID any work at Sevenfold. It says that the work HE did copies YOUR style - i.e. he landscaped it to fit in with your work at Campbell Coast.

You're not being given credit but a compliment! In my opinion, it's well-deserved.