You may have noticed from the badge in our sidebar that The BBB Gazette has joined the Second Life Blogger Network (SLBN).
Clicking on the badge will take you to the SLBN page at the Second Life Community website, where you can see all the currently-featured items.
SLBN is a curated showcase of posts from Second Life bloggers and vloggers. Teresa Firelight's recent article about the ongoing Bellisseria Trick or Treat event was the first of our posts to be featured. Congratulations Teresa! We hope there will be many more.
BBB HALLOWEEN NEWS FLASH
The Bellisseria Bureau of Bureaucracy's head office will be open for Halloween. Our normal bureaucratic tendency is to close for all holidays, but the Powers That Be have overruled us on this occasion. Our doors will remain open in the Spirit of Halloween. In fact, we will welcome you with open arms.
We will provide all the usual services, such as our passport and driver's licence applications, travel advice, and – of course – our machine where you can get your passport stamped. If you are into Trick-Or-Treating, we also offer a candy bucket for those participating in It's the Great Trick Or Treat Event Bellisseria.
In addition, we will offer some special Halloween amenities. These will include the opportunity to interact with foreign guests coming all the way from beyond the grave. We also invite you to sit a spell on our back deck and relax. Just don't stay too long, as two of our previous guests did.

Once again, we remind you that Bellisseria Bureau of Bureaucracy will be open for Halloween and invite you to visit. 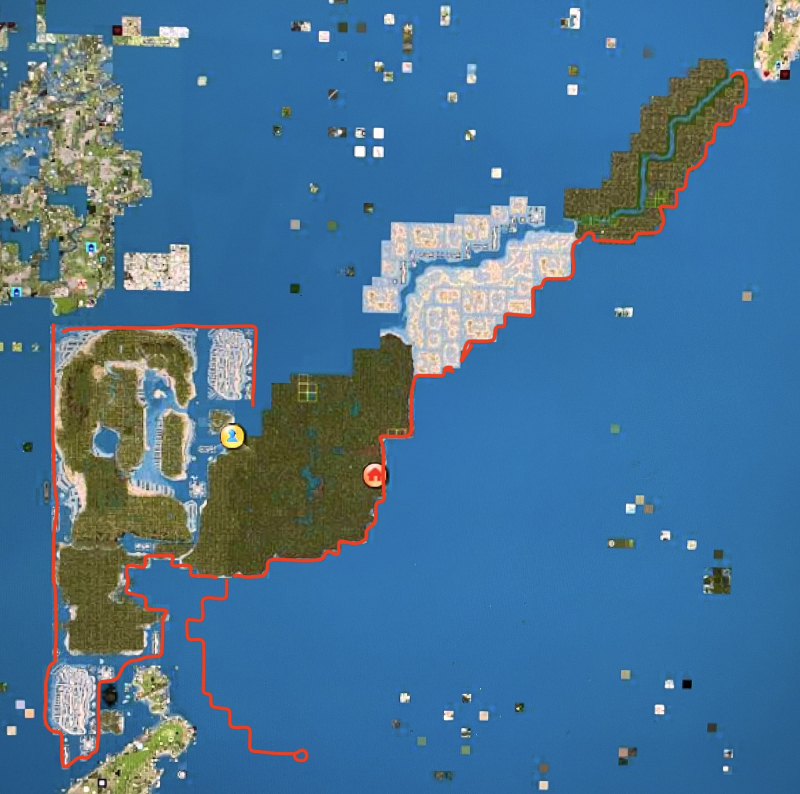 Reader Bamboo Druth wrote to the editor to ask about place names in Bellisseria; sending in a map showing the route of a recent voyage and asking

Every SL mainland continent has a name; Sansara, Satori, Corsica etc., but usually the only official names within a continent are those for each of its Regions (in the SL sense of that word). Judging by the wacky names borne by some of Bellisseria's regions, the creativity of the Moles and Lindens is quite sufficiently tested in coming up with those!
Parts of Bellisseria have unofficial nicknames. Some think the first part of the continent to be released resembles a dragon. Its head looks down on an island known as The Pickle (because it looks like one). The sandy atoll in front of the dragon’s head is known as The Squishy Pickle. As there's a bar of that name near its centre, that’s at least semi-official.
Smaller islands with lighthouses and boat Rez Zones are usually known by the names of the region they’re in (eg Norse Auk). Springhurst Gulf Island is also known as Hermit Crab Island or just  Crabby Island – for reasons obvious to the most casual of visitors. Coral Waters Island (with its pier, airstrip and helicopter pad) was initially announced by Abnor Mole as Dogbone Island Municipal Airstrip.   The Bellisseria Fairgrounds (with their own stamp-issuing terminal – and often event stamp-issuing terminals too) are on an island that bears that name. A special example of a named locale is the SS Galaxy – moored in Bellisseria – which occupies three regions.
The main land masses of the continent don’t have names however. They’re mostly known by the types of housing they feature, so a resident might say I live in the Stilts/the Chalets/the Log Homes for example. The only locale that does have a name is the fantasy sub-continent – now informally (but universally) known as Fantasseria!
The BBB has no official role in naming places. These are just names your editor has encountered in his time in Bellisseria. It is not a comprehensive or definitive list. If you know any other Bellisserian place names – or nicknames – please let us know in the comments!
Thank you, Bamboo, for asking the question that gave rise to this article.
NEW STAMP LOCATIONS
It's another bumper week for new visa stamp locations. We have five new places to get your passport stamped, including two new LDPW builds. The prices at Molemart really can't be beaten and as for underwater glass road tunnels, you'd need to go a long way to find another like the Deongseo Tunnel on Route 9.
The Whistle Stop Café is a cute little Coffee Bar in the beautiful camper areas of Bellisseria, near to an SLRR Rez Zone. Drinks, food and music are all free and if you don't want to Rez your train, there are horse and vehicle rezzers too. We also have a Biker Bar for you this week and a working farm for you to visit. Enjoy your exploring!

Congratulations guys on getting included in the SL Blogger Network, and getting an article featured! It's the bureaucrat in me I guess but I'd like to see every island, river, and street names in Bellisseria. Without order there's chaos:)