PATCH, DERRICK & ABNOR AT THE BBB

On Wednesday we had a meeting of the BBB staff. We were joined by Patch Linden, Derrick Linden and Abnor Mole who sat in on the routine reports to get up to date with our work and to learn, in particular, about a major new product in development by our talented scripting team. It's still confidential,  but good progress is being made and further announcements can be expected Soon®. In the meantime we were much encouraged by their enthusiasm.

We are also pleased to report a final sign off at the meeting on the long-awaited sub-offices to be built around Bellisseria. We showed the prototypes of these – and announced our plans to build them – at SL18B. Now, with this final approval, it should now be "not long" (defined as "sooner than Soon®!") before they appear in-world.

There was also approval in principle of other exciting new plans. More details will follow when the Lindens have worked out the details on their side. For now, let's just say you can expect more (and more permanent) BBB offices and embassies around Second Life®.

In the meantime, applications both for new passports and new visa terminals continue to grow healthily. BBBug is now among the biggest 'invitation only' groups in SL. A conservative estimate of the stamps issued by our visa terminals so far was given as 65,000. 212 different stamps have been issued so far for permanent locations and temporary special events. At the current rate, we expect to have issued 300 stamp designs by the time we celebrate our second anniversary in January 2022.

We are proud of the support our bureaucratic endeavours have earned from the Lindens and Moles. All of us at the BBB very much appreciate the help and encouragement they continue to give us. Patch ended the meeting by saying;

Thank you for all that you are doing!  The community loves it!

Well, Patch, we love our community right back. As our colleague Teresa Firelight recently put it;

That (with the possible exception of Mr Beeb) is how all we BBB bureaucrats feel. Vivat Bellisseria!

Fenella Allen – the founding editor of the BBB Gazette – has left Second Life®. Lord Junibalya, who prefers to be known just as "Dave", has taken over as editor as from this issue. 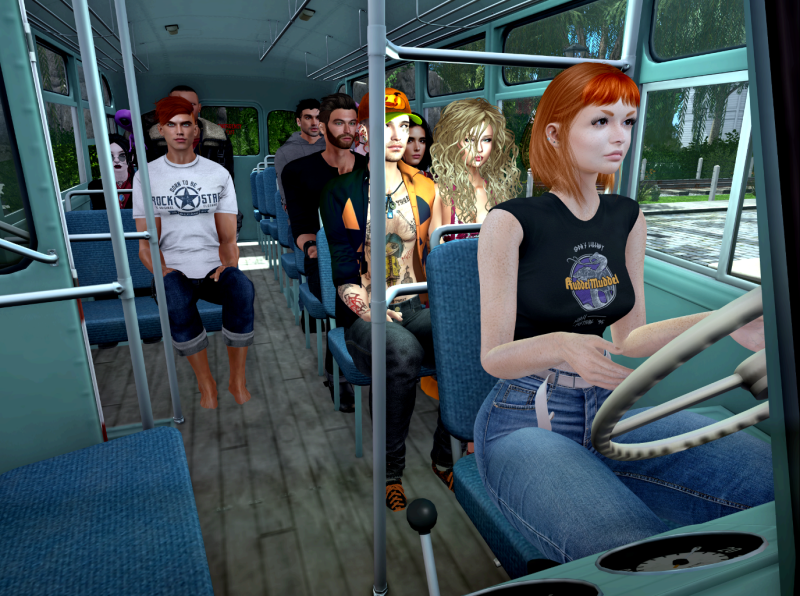 I decided to go on the Bellisseria bus tour today. The driver and tour guide was Yukiko Yeshto. We started at Red Hook and collected a stamp there before we boarded the bus.

There were a lot of fun people on this tour… nine of us total including our driver. I was impressed that the bus could hold so many and cross so many regions with so few problems. We did lose one passenger at a region crossing, but stopped shortly after and got him back.

We drove through a scenic Victorian area and had a lot of fun as the bus huffed and puffed to get to the top of each of the arched bridges.

Our first stop was Feline Fellowship. We collected their stamp, then continued on our way. Yukiko also gave us some really good information about trains in Bellisseria.

Then we came to Bellisseria Commissary - an SL Public Land Preserve, where we collected another stamp. After that we made it to Tea&Brooks – a cute cafe and it also has a stamp machine, so we collected yet another.

SL was behaving well for us until we got to Lockwood.. where the bus wheels locked and we swerved off the road. Yukiko, our cool-headed bus driver was able to back us out, make quick repairs, and get us going again.

Next we made it to the Bellisseria Gaming Club and collected another stamp. One of us noticed the place has greedy tables, and we almost lost that passenger at that point.. Fortunately, they decided to pass on the greedy game and continue on the tour.

We continued to the final destination: Bellisseria Aeronauts headquarters. There we collected our final stamp, as well as some free boats and hot air balloons. We thanked Yukiko and went about our days.

I really do recommend this tour.. it was a lot of fun as well as a great chance to socialise with fellow Bellisserians.

POSTCARD FROM THE BEEBS

They're on the move. This week they're in Liverpool, home of the Fab Four. 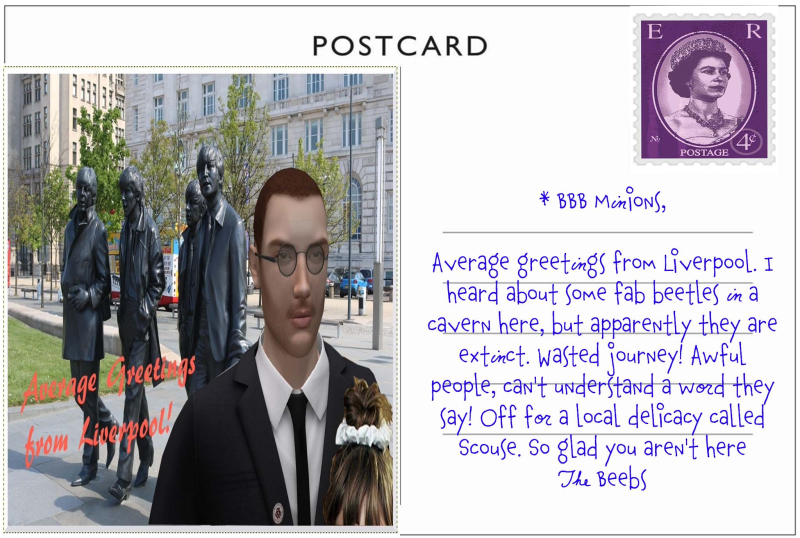 There are four new locations this week. Two of them are on public land belonging to the LDPW. Our beloved Moles have placed a stamp terminal at their own home – the Meauxle Bureaux. You'd expect it to be one of the cutest builds in SL and you'd be right. As the Winter Sports season begins, they've also placed a terminal at Chalet Linden – "a cozy snow lodge" where you can "Warm your toes by the fire in good company or brave the cold and climb up the nearby slopes to go skiing."

There is a limited edition event stamp available at the latest pop-up art gallery by ART UNBOUND. ReConstruct is an exhibition in a ruined building in Tempelhof in the Ceiram Region where you clamber over rubble to see the art. It opens on October 17th and will run until November 7th.

Finally this week, there is a new café called the Damocles Diner in the Spini region where you can enjoy informal roadside dining.

I highly recommend the bus tour. Lots of fun and a great driver. With a crowded bus we crossed those region crossings with ease. Stamp collecting or not it's a great way to see Bellisseria

Thanks a lot for this awesome article, Teresa! The tours wouldn't be as great without the passengers so shoutout to everyone who joined and made this tour a blast. I had lots of fun!