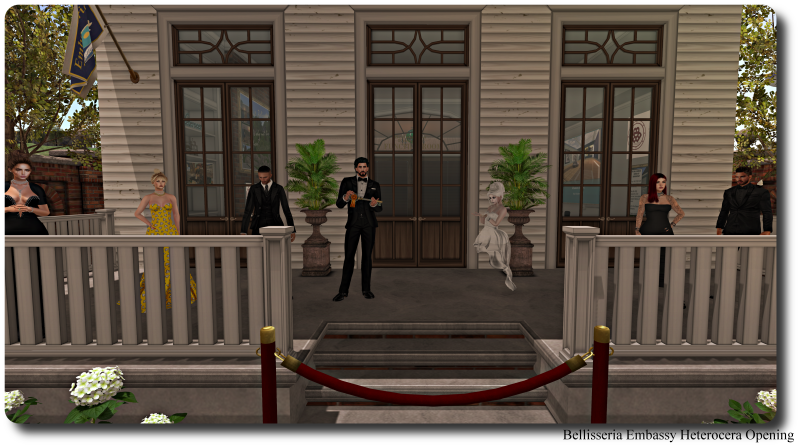 Her Excellency The Ghost (theghostofghost) welcomed Abnor Mole and other distinguished guests to the new embassy in Heterocera at 12 noon SLT last Thursday for its official opening. Abnor presented her with the keys to the building after a speech in which he observed that transport infrastructure had been an important part of the design of Heterocera – on the understanding that connections build community. That had been "a large influence" on the design of Bellisseria too. He added;

Although Bellisseria will always be different from mainland, the lesson of the importance of the connecting influence this type of infrastructure provides was not lost on us. Today we are here to celebrate another connection, connecting the residents of Heterocera to the residents of Bellisseria. Just as roads and bridges connect the residents on a continent, it is our hope that these embassies will act as a bridge to connect communities of residents between continents.

The Hon. Ambassador responded by thanking everyone present, revealing that she had been born in Heterocera and saying;

As I love Bellisseria for its beauty and harmony, so I love Heterocera for its excitement and sense of movement and industry. The main purpose of the BBB has always been community building and human connection, so please, let's go inside, raid the bar and enjoy each others' company!

A delightful party ensued during which the CEO of the BBB revealed that Freddie Harrington had just been appointed as Bellisseria's Hon. Ambassador for Nautilus.

HE Harrington joins Yukiko Yeshto in Bellisseria's Corps Diplomatique – she having already been appointed as Hon Ambassador to Sansara. Both new embassies are currently under construction so watch the Gazette for details of their grand openings in due course! 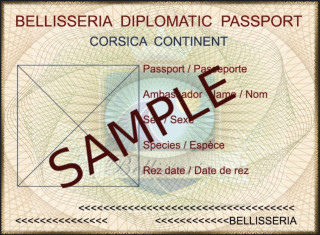 The design of Bellisseria's new diplomatic passports has been approved. These will be carried by Bellisseria's Honorary Ambassadors.

Their excellencies Jack Vincent and The Ghost have already taken up their positions in Corsica and Heterocera respectively. Watch out for further announcements here in the Gazette as to future appointments.

Incidentally there was a nice piece by Gemma Cleanslate in the SL Newser on the opening of our embassy in Corsica.

If you are interested in serving a term as Honorary Ambassador to one of Second Life's mainland continents, please contact our Founder and CEO, BÓÒ (boo.rojyo) in-world.

The BBB Postal Service has been well received and this week's list of new locations – below and in Suη (dark.sunflower's) weekly notecard to our user group BBBug in-world – includes our post offices opened to date. Expect to see more opening soon.

Each post office now issues its own distinctive visa stamp for the Bellisseria Passport.

If you have been diligent in collecting all the visa stamps (including special event stamps and other discontinued ones) you will now have run out of space on Visa HUD 4.

Don't despair – our diligent bureaucrats have the matter in hand. You can get a new HUD from the BBB HQ at Winters Elm. You'll find the sign that issues the HUDs inside the front door (on the wall to the left) as you enter.

You can collect visa stamps for your Bellisseria Passport at six new locations this week, including three BBB Post Offices.

There are also stamp issuing terminals placed by our esteemed Moles at two new LDPW locations. The first is a cute little island in the Mare Secundus on the Sansara continent, which is home to a flamboyance of flamingos. The second is a secret hangout (we're giving nothing away here - that's in the land description) at the Pump Station of the hydro-electric dam serving the Brighton Power Station. You'll have to find the hangout yourself – and for once our beloved Moles have not placed the stamp terminal near the landing point either. Have fun exploring!

Finally, as reported above, our new embassy to Heterocera is open for business – and there's an entry visa stamp to collect!