Regular readers will know that the BBB Gazette is published weekly at one minute past midnight SLT on Saturday. The copy deadline is midnight on Thursday. As there's so much to tell you during BBB2B however, we are publishing this special BBB2B Supplement. Enjoy.

The pictures feature Zoe and Dave  holding their SSiDs – the tablet computers that apply their personal stamps to your passport when you click them. Nineteen Belli diplomats and bureaucrats are carrying them at BBB2B so say hi when you see us and collect all the stamps!

A BRIEF HISTORY OF THE BBB

Picture the scene. A cold January evening on a Houseboat with the Light of Aurelia Lighthouse flashing across the cold water. Boo was pondering the opportunities created by the fresh little community of Bellisseria. His previous exploit in Bellisseria, contraband, was a dismal failure. His creaking inventory was full of unused 'House for Sale' signs. Similarly his store of 'illegal house colour paints', his 'terraforming bulldozers', and 'Low Lying Skyboxes', all gathered dust. In a moment of epiphany he decided to leave the dark side. 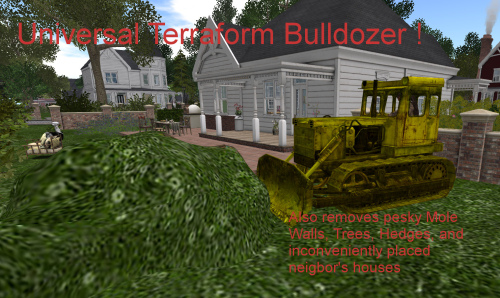 One day these Bellisserians will leave their happy homes and travel. Why should they have all the fun, and no consequences, why should they escape bureaucracy? So in an atypical frenzy of activity Boo produced the very first Bellisserian passport, number BE100000101! The paper was cheap, it was clunky, it was ugly, but it was a green shoot of Bureaucracy! What better name than the Bellisserian Bureau of Bureaucracy to oversee this new venture? Such a snappy name.

Surprisingly folks liked it. Very soon Boo was joined by Bel, Sun, and North in this shared madness. North made the passport more than an ornament; you could actually collect stamps. Sun made terminals and stamps. Bel made passports, and told everyone about it whether they were interested or not! Gingir let the madness creep into the Citizens of Bellisseria group where it gained momentum. Happy days, little did they foresee the monster it was to become.

Soon driver licenses and plates were added to the offerings. Stamp terminals turned up everywhere. Even Patch and the Moles got in on the act. The weirdest thing was that the most talented folks actually joined this crazy band of bureaucrats. Fenella (since sadly deceased but with us in spirit), the awesome Prudence with her Parade Of Homes, the industrious Zoe, the enigmatic Ghost, Teresa our photographer and 'all rounder', and then Dave, who took the reins of the BBB Gazette almost seamlessly from the departed Fenella.

Boo's beloved Fiona too, thought why suffer his meaningless ramblings about the BBB all day, I might as well join him! Coal arrived, with awesome scripting talents, and brought us over to Discord, which is in equal measure our slave and master! Then Syvalin arrived to focus Coal! Sceneris came with those unprecedented video skills, Lilla became our mesh designer, and most recently Amanda arrived to give Sun her talented assistance.

Then came the embassies. A tiny embassy in Corsica had been our refuge in the wilder Mainland for some time. Today though we are spread through seven continents, with the assistance of our talented Honorary Ambassadors, Jack, Freddie, Charley, Yukiko, Bijoux, Ghost, and Fiona. If they can cross-fertilise the community spirit in Mainland with that in Bellisseria then they will be a success!

Then there's Mr Beeb. The less said about him the better! What next after two years? Well there's still no shortage of ambition. We have both technical, and exciting practical plans, and the enthusiasm to carry them out. Stay around for the ride!

Pring Productions – the production company of our very own Pru and Sceneris – premiered their movie of BBB2B yesterday at the Fairgrounds. Here is the link to it on YouTube for everyone to enjoy. We hope you enjoy as much as those involved in building the BBB2B venue, for whom it is a fantastic souvenir of a lot of hard work! Work that was worth it though – it looks fantastic in the movie!

BBB2B got off to a wonderful start with the Boat Rally from Springhurst Gulf to the Fairgrounds last Sunday, the opening day. There was a great turn out and much fun was had. Thanks to all who took part and in particular to Yuki, who organised it all so well. Here are some pictures Yuki sent us to give you a flavour of the occasion. Many thanks to Gemma Cleanslate for additional photos in the gallery.

Don't forget that you can do this trip and collect the six special stamps from the magic buoys until 31st January. After that, the buoys will self-destruct! You can pick up the navigation HUD to guide you around the course from the BBB2B noticeboards at the Belli Fairgrounds.

The opening ball was great fun and also well-attended. There were over fifty avatars present at one point! The fireworks were amazing too! 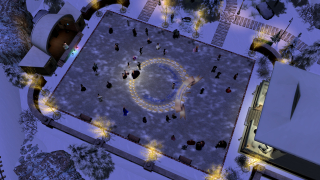 BBB2B CONTINUES UNTIL 31ST JANUARY: COME JOIN IN THE CELEBRATIONS!

Tomorrow is Ambassador Day. The final Bellisserian Embassy – to your editor's home continent of Satori – will open and the post-ceremony dance will take place at the Fairgrounds Event Space, hosted by new Ambassador Bijoux Barr. There will be live music by SLebrity musician Bsukmet Stormcrow and the fun will be (as we bureaucrats love to say) mandatory. 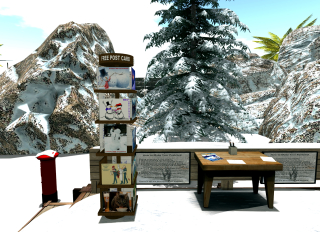 Don't forget the BBB2B Fringe events either. Teresa Firelight's Send Your Friends a Postcard workshops, for example, take place at the deck next to the BBB2B post office. They will be on Thursday from 2:00 PM - 3:00 PM SLT and on Friday from 11 AM - 12 Noon SLT.

Another fringe event is Freddie's Pop Party, hosted by H.E. Freddie Harrington on Saturday 29th January. It runs from 10AM - 12PM SLT at the Bellisseria Fairgrounds. Come dressed in retro clothing or formal or come as you are for two hours of fun music and dancing with your diplomatic host, Freddeh!

Finally, Michiel Bechir whose travel images feature in our Art of Travel exhibition at BBB2B will be available for a meet and greet at our art gallery in the cave at the fairgrounds to discuss his work at 11:30 SLT today. 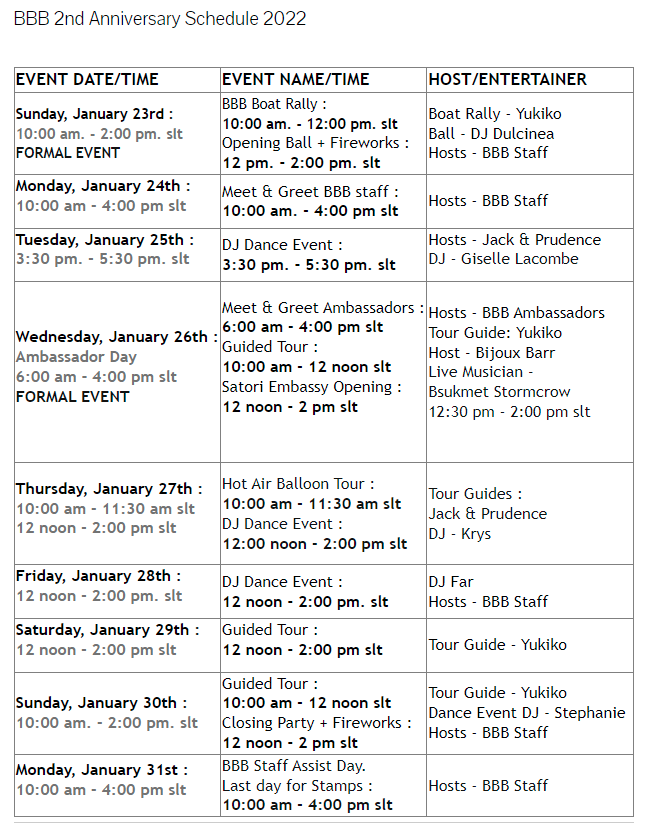 There are so many stamps to collect for your Belli Passport during BBB2B. Here's your handy cut out and keep checklist to use as you roam the oceans of Bellissieria and the Fairgrounds in search of stamp terminals and buoys, and as you stalk our diplomats and bureacurats with their SSiD tablets. Enjoy your quest.

Thanks for the special supplement. So much going on, no wonder were exhausted!

I really enjoyed reading the Gazzette. Thank you for all the information and photos.
it is such a beautiful build, I will be sad when it closes. But at least we will have the video of BBB2B to watch over and over again!

Looking forward to meeting more people at the event and the stamps are so cute I hope many of us will be able to get to look at the beautiful stamps again and again.

We'd love to see you at the Fairgrounds but please make sure you dress warm - it's very cold up here!