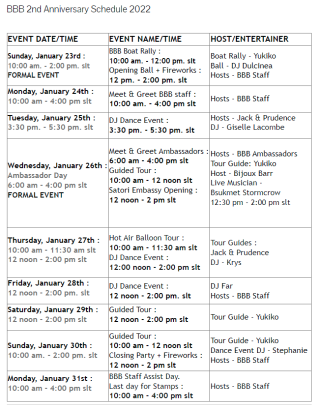 The BBB bureaucrats and Bellisseria's diplomats hope that you've had as good a time at BBB2B so far as we have. We've been delighted to see so many of you at the Bellisseria Fairgrounds to enjoy our wonderful Winter-scape. The event continues until 31st January, so there's still time to catch it if you haven't already.

We have received many compliments about the build and you seem to have had a great time at our various events. Thank you all for your company. Gemma Cleanslate, over at the SL Newser, wrote her own account of our festivities and seems to have enjoyed them too. Thanks, Gemma!

Today and tomorrow Her Excellency Yukiko Yeshto will lead two more of her celebrated guided tours. Both begin at the Fairgrounds and will run from 10am to 12 noon SLT. Travelling for both tours will be by bus, train and mini helicopters. If you join a tour, please consider detaching all unnecessary attachments and scripts. More information will be available at the fairgrounds today.

Tomorrow is the closing party for the event. Your hosts will be the entire BBB staff and music will be provided by DJ Stephanie. Please join us to bring the celebrations of our 2nd Birthday to a rousing close!

On Monday, January 31st, it's Staff Assist Day – the final chance to collect those elusive personal stamps, to ask us about the BBB's services, stamp-issuing locations and of course Bellisseria's diplomatic mission to the other seven continents of Second Life®.  The full programme is reproduced here and can be found on notice boards around the fairgrounds. We will be clearing the fairgrounds on 1st February.

For Ambassadors' Day at BBB2B, we created poster maps of the mainland continents where Bellisseria has opened embassies. In conversation with many of our visitors, we've found they were intrigued to learn about SL's geography. Many simply didn't know much about its continents – old and new. It is one of many reasons to promote travel in SL and we believe our new embassies can help with that.
Bellisseria, the still-new Linden Homes Continent, with its beautiful landscapes and community infrastructure, has given rise to many interest groups among its residents. They engage in social activities, build galleries and cafés and stage regular events. They always seem excited to mix and share their discoveries. It is a spirit of community that can also be found elsewhere in SL and for us represents the common ground that unites us, whether we see ourselves, primarily, as Bellisserians or mainlanders.
Everything we do – both in the Bellisserian diplomatic corps and in the BBB bureaucracy – is designed to encourage SL'ers to visit each other's places, make new friends and get to know each other (and SL itself) better. Many Bellisserians love the cheerful anarchy of the other mainland continents and admire the efforts of those who make beautiful places there. Many mainlanders enjoy the landscapes made by the Moles in Bellisseria and the communities that have formed here. We hope to establish new and fruitful relationships between SL residents on all continents and to build on existing friendships.
Our ambassadors have been entrusted with the task of supporting those efforts to make this thriving virtual world an even better metaverse for all of us. All but one of them have their roots on mainland and all of them are active members of communities and projects there – as well as in Bellisseria. This allows them each to bring their own unique approach to their diplomatic mission. We at the BBB look forward to supporting them in their endeavours; cultural, social and touristic. We hope you will do so too.

Last Wednesday, as part of BBB2B's Ambassadors' Day, Bellisseria's final planned embassy to the other mainland continents of SL opened. Her Excellency Bijoux Barr, the first Hon. Ambassador to have begun her Second Life® in Bellissaria before expanding into Mainland, welcomed guests to her new embassy in Satori;  founded in 2007 as the Japanese Continent.

Abnor Mole did the honours in presenting the key to Bijoux, saying:

Bordered on the south by Bellisseria and to the north by Nautilus and the Blake Sea, Satori has always been one of my favorite continents, and not just because I got to build most of the roads there (and yes, I know many of them are a bit quirky). The rolling green hills and sandy beaches have always been a big draw to the continent. And now it joins Bellisseria as the conduit from three great continents to three more. Bijoux is unique among the Bellisseria Ambassadors in that she started in Bellisseria and then discovered the mainland, rather than the other way around. This perspective should help greatly in her efforts to help Mainlanders and Bellisserians to recognize and appreciate the unique opportunities, benefits (and quirks) each provides. We wish her the best in this task and know that she will do her best in her endeavors. And so with that, I declare this Embassy open and, Bijoux, I present you with the key.

Thank you Abnor and everyone! I am excited to welcome you all to the official opening ceremony of the Bellisserian Embassy in Satori. My name is Bijoux Barr. I have been a resident of Bellisseria since April of 2020. Since I started, I have grown to love the people and the beautiful builds that the Moles have done for us. I was often found exploring the roads, rails, waterways and skies in Bellisseria, all while admiring the cool and peaceful surroundings. And then I dared to venture beyond...

Originally created as a Japanese continent, Satori was the first within the East continental group and forms a supercontinent with Nautilus in the north. Drive along the roads, discover the wonderful builds and communities here. Sail along the coast, or take the views from the sky, It's all an adventure! Discover RP communities, art communities, music and even our very own Mole Village!

I plan on contributing to Bellisseria - Satori relations by means of art and music, with exhibits to feature artists from both Bellisseria and mainland, to establish connections with gallery owners, artists, musicians, etc. while having fun and sharing people's creativity. It's an honor and a privilege to be able to represent this vibrantly rich continent to our beloved Bellisseria and vice-versa. Thank you so much for being here and sharing this momentous event with us!

After warmly applauding these speeches, the large assembly of guests toured the new embassy and its beautiful Japanese gardens before entering a portal back to BBB2B at the Fairgrounds, where composer/musician Bsukmet Stormcrow put on a wonderful live show for them.

THE ART OF TRAVEL 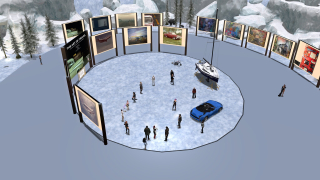 People seem to be enjoying the art exhibition at BBB2B themed on our own raison d'être, travel. On Tuesday contributor Michiel Bechir met a very erudite group of visitors, many of them artists in their own right, to discuss his own artistic approach. A fascinating and lively discussion ensued, which all present enjoyed. Our thanks to Michiel for an excellent BBB2B Fringe Event.

Frank Atisso featured the show in his weekly recap of SL Art. Thank you, Frank.

We break our record this week for the number of new Linden Department of Public Works (LDPW) locations added. You can now pick up passport stamps at four new Mole-built places, which are planned to feature in a new tour organised by their excellencies Yuki and Freddie, Hon. Ambassadors.

The other new location is our Embassy to "the Japanese Continent", Satori. Stop by to pick up your entry visa. If you want to visit any of our embassies, post offices or other locations you can find them either in the Online Travel Guide or in our useful directory of BBB SLURLs. Both are to be found (along with a ton of other useful information) in the sidebar to the Gazette (to the left of this article).

I love the new layout/format with the links on the left side .. makes it super easy to notice and find lots of helpful information. Looking Good!!