The official opening of Bellisseria's Embassy to the mainland SL contintent of Jeogeot (sometimes called "the Korean Continent") took place on Wednesday 12th Jan at 11:50 PM SLT. Abnor Mole was unable to attend at that hour, so Boo Rojyo, Founder and CEO of the Bellisserian Bureau of Bureaucracy presented the keys to the embassy to Her Excellency Charley Mayne, saying;

I know Abnor Mole would have liked to have been with us today but even Moles need their sleep. I know he wishes Charley well in her duties as the Honorary Ambassador for Jeogeot.

Jeogeot, at the furthest South of SL, is a starting and an end point for many in their travels through our continents. As a direct neighbour of Bellisseria I do encourage Bellisserians to see more of this large and varied continent, and likewise the residents of Jeogeot to visit their recent neighbour too.

I myself have lived in Jeogeot and was surprised to find that my home on the northern tip of the continent was actually further North than some parts of Bellisseria! For the intrepid amongst you there's possibly some point in Tully Low to begin that epic journey to the Western reaches of Gaeta. The BBB really must make a medal for that feat!

After Boo declared the Embassy open and presented the key, H.E. Charley responded;

It is a delight and an honour to receive this key and formally begin my service as Ambassador to the continent of Jeogeot. It is a pleasure to have the opportunity to bring people together, whoever and whatever they are, wherever they live: when all's said and done, we are all Residents.

Much like northern neighbour Bellisseria, people of all descriptions have thrived here, and I have seen first-hand what a dazzling array of places have been created. From the urbanisation of the north to the vast open plains of the south, there is room for every kind of Resident to find somewhere they can call home.

In fact, when I first came to Jeogeot a year ago to ride on a narrow-gauge railway, I didn't even know where I was. But since then, I've found myself coming back, riding the pod cars, driving along Wellington Road, visiting airports, finding something else to see every time I've been here.

But, as we all know, speeches should be short. So, ladies, gentlemen, and friends beyond the binary, let's head inside and start the party!

As has become the custom for these events, the ceremony was followed by a formal but fun Grand Ball at which the assembled dignitaries celebrated the establishment of diplomatic relations between the two continents with dance and lively conversation. The formal portraits of H.E. Charley in the photo gallery below were taken by one of our staff photographers, but we are grateful to H.E. Fiona Jogiches, AmandaT Tamatzui and our CEO himself, for their photos from the event itself. AmandaT took many more photographs of the event and you can see them in her Flickr Photostream. 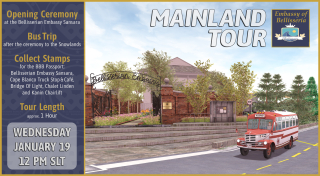 Bellisseria's Embassy to the Old Continent, Sansara, officially opens on the 19th of January and the Embassy to Satori – the Japanese Continent – will open on January 26th.

Both of those events begin at noon SLT. The key to each of those embassies will be presented by Abnor Mole.

There will be the usual formal ball after the opening of the Satori embassy, but the Sansara opening ceremony will be followed instead by a one hour bus tour beginning outside the embassy gates. Your driver and guide will be the Honorary Ambassador herself, Her Excellency Yuki Yeshto. Details can be seen on the poster above (as usual, click to see full-size).

Please watch out for your official invitations to both of these events from the BBBug and other groups. We hope to see you all there!

Preparations continue apace for the celebrations of the BBB's second birthday (BBB2B) at the Bellisseria Fairgrounds. The party will run from January 23rd to February 1st and will open on the 23rd with a boat rally and DJ dance event, followed by a grand Opening Ball and fireworks. The full schedule of events will be published in the next edition of the Gazette and will include (among many other things) an art exhibition on the theme of travel.

There are only three new locations this week where you can collect visa stamps for your Bellisserian Passport. This is the calm before the BBB2B storm, where you will able to collect not just the event stamp, but personal stamps from all BBB staff and Bellisserian Ambassadors! Also, to be honest, we are holding a few stamps back so that the Event Stamp for BBB2B can be the 300th issued!

The entry visa for Jeogeot is now available from the newly-opened embassy. There's also a new addition to our list of many travel hubs - an airport and marina. Finally there's a limited-edition stamp for the Winter Wonderland Ice Skating event, which runs from January 20th to March 3rd.