BBB2B – THE SECOND BIRTHDAY OF THE BELLISSERIAN BUREAU OF BUREAUCRACY CELEBRATED AT THE BELLI FAIRGROUNDS! 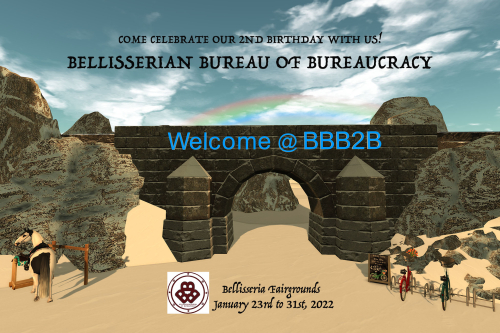 The BBB2B celebrations begin tomorrow. Work is underway at the Bellisseria Fairgrounds to put in place horse rezzers, bike rezzers and a narrow gauge railway to transport our guests around the events and attractions. There will be a BBB information centre, a special Embassy, a working BBB post office with BBB2B postcards to collect and send, an outdoor art gallery and other delights.

Here is the full final programme for the event, which continues through January 31st. 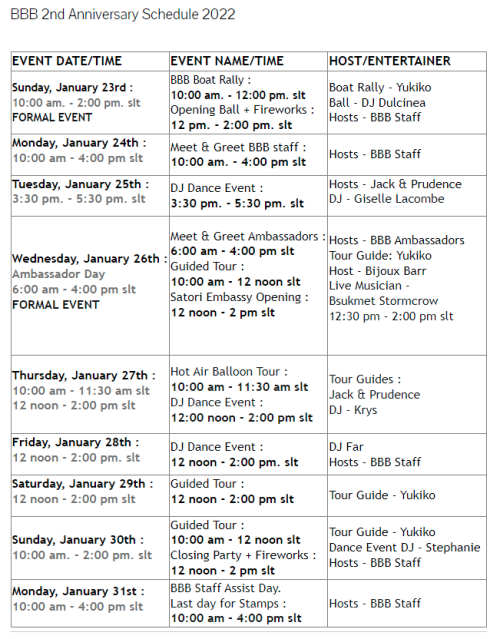 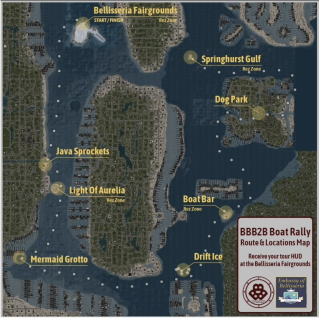 As you can see, the programme begins with a boat rally led by H.E. Yukiko Yeshto, Hon. Ambassador to Sansara. The starting point will be at the Bellisseria Fairgrounds at 10am SLT tomorrow Sunday January 23rd. Yuki will hand out the navigation HUDs there. They will take you to Springhurst Gulf, where you can Rez your boats and from where the fleet will set sail.

In an exciting innovation for such a boat rally, the Moles have kindly agreed to place temporary stamp terminals in special buoys along the route. You will be able to pick up unique stamps for your passport as you sail by! These buoys will self-delete at the end of BBB2B so don't miss your chance to collect these rarities!

Don't worry if you can't make the rally itself. We know that time differences get in the way sometimes. You can pick up a navigation HUD at the Bellisseria Fairgrounds from the Information Centre or the temporary Embassy. You can then sail the route at any time before the buoys self-delete on January 31st when BBB2B ends.

The stamp locations will not appear in the Online Travel Guide, so sailing the route is the only way to obtain them.

Here are a couple of examples of the special stamps by way of a taster.

During the tour you will learn some interesting facts about the history and background of the places en route as you sail towards the opening party at the Bellisseria Fairgrounds.

Your editor is particularly looking forward to hearing an explanation of the fascinating phenomenon of the Bellisserian drift ice! However many times he sails by, he is always surprised to see it in what seem to be mild weather latitudes.

Another special attraction at BBB2B is an exhibition called The Art of Travel, which features works by well-known SL artists Michiel Bechir, Sisi Biedermann, Melu, Bif Mopp & Amanda Tomasoa (aka AmandaT Tamatzui in SL). The exhibition is curated by AmandaT and your friendly Gazette Editor Dave. It is set in a snowscape so wrap up warm! If you are an SL Time Lord, you'll find that the art of time travel is also possible. Set your Tardis's navigation coordinates to "BBB2B Art Exhibit" to land at the exhibition.

In addition to the scheduled programme there will be "fringe" events popping up from time to time. For example our own dear Teresa Firelight will organise two Send Your Friends a Postcard workshops at the deck next to the BBB2B post office. They will be on Thursday from 2:00 PM - 3:00 PM SLT and on Friday from 11 AM - 12 Noon SLT. If you're not yet familiar with the BBB Postal Service, this will be a great opportunity to get to know how it works.

We are excited about all of the events at BBB2B. It's an ambitious programme and we hope to see as many of you there as possible. We plan to party hard to celebrate two years in which we have issued hundreds of passports, licences and registrations and issued visa stamps for 300 SL locations in Bellisseria and beyond. The 300th stamp, in fact, is the one you can collect at BBB2B itself! To be honest, that took some bureaucratic planning to achieve, but it's an index of our success that we originally intended to issue the 200th stamp at the event!

You can also collect stamps from personal passport controls by BBB Bureaucrats and Bellisseria Diplomats at the event. Watch out for us carrying our SSiDs – Single Stamp Issuing Devices – in the form of tablet computers. Click on them while wearing your Passport HUD and we will apply a personal stamp with our own logo and signature. These are ONLY available at BBB2B so be sure to collect them all.

There are nineteen personal stamps to collect from: Boo, Beeb, Dave, Fi, Ghost, Midnight, North, Pru, Sun, Zoe, Yukiko, Freddie, Charley, Sylvalin, Bijoux, Coal, Jack, Teresa and AmandaT. If you're shy, you can click and run, but we hope to get to chat to as many of you as possible. It's nice to get to know the citizens we serve for their fun - and ours! 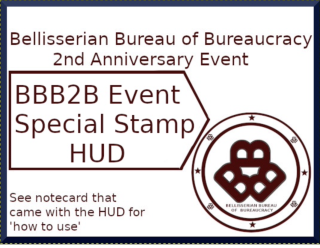 By the way, if you don't have a Bellisseria Passport, you don't need to miss out on the fun of collecting the special stamps available at BBB2B. A special HUD will be available for you to use.

If you are a Bellisseria resident (or the officially-registered partner of a resident) you can later trade the special HUD in for the real thing. Our staff will transfer the stamps on it to your shiny new passport when your application has been approved!

You can pick up the special HUD from the info centre and embassy notice boards at the Fairgrounds.

Bellisseria is finally represented on the old continent, Sansara, where Second Life® began. On Wednesday 19th January at 12 noon SLT Abnor Mole presented the keys of the embassy to Her Excellency Yukiko Yeshto, saying;

Welcome to Sansara.... the cradle of our virtual civilisation. Nearly two decades have passed since shock waves from Da Boom echoed across the grid and we have spent much of that time watching and riding the tsunami it initiated. We've watched the grid grow and evolve and we have grown and evolved with it. Many things have changed since those early days. That's what happens as things evolve. But as much as they change they also stay the same. The lessons of that evolution seem to prove something very important.  "Build it and they will come?" Yes... but how will they get there and why will they stay?

We built roads and bridges to connect a continent.  We built Bellisseria to connect those continents. And now we build these embassies to connect the communities on those continents. For the truth of the matter is (whether you like it or not) we are all ONE community.... one big, scary, sometimes dysfunctional community. Exploration leads to connections. Connections lead to friendships. Friendships lead to community. No one knows more about the importance of exploring than Yukiko. We wish her the best of luck on her new expedition into the stormy seas and uncharted waters of intercontinental diplomacy.

She is going to need it... for here there be dragons. (no, really... actual dragons). And with that I declare this Embassy open.

Accepting the key from Abnor, the new Honorary Ambassador responded with a speech in which she announced that one of her main focuses will be organising tours to encourage community connections and build friendships.

I am happy to announce that such tour events are not only already planned but actually scheduled. In the context of the grand BBB anniversary festivities, we will host a boat rally tour this Sunday, January 23. Today's Embassy Opening has a special twist. Instead of a ballroom dance, I decided that I wanted to give you a little idea what awaits you in regard of hosted tours. I invite you to follow me over to the entrance to hop on the bus that will bring us to the Snowlands of Sansara. We will also be able to collect some of the recently released stamps. I hope, you didn't forget to bring your passports! -- And as soon as I turn the bus keys, this marks my official declaration that the embassy is opened!

After inviting her guests to add the new Sansara entry visa stamp to their passports, she led them to the bus park outside. Acting as both driver and guide and with two other buses in convoy, she took her passengers to Cape Blanco Truck Stop & Café, the Bridge of Light, Chalet Linden and the Kanin Chairlift – pausing at each for them to stamp their passports! It was a fun, funny and delightfully sociable experience.

Good friend of the BBB – all-round good egg Becca Ordinary – wrote about the trip at her BBB-licensed publication, The SLuggle. Gemma Cleanslate of long-running virtual newspaper the SL Newser published a more comprehensive account, which really gives a good "feel" for what fun it all was!

The tour was a good taste of the many delights the Old Continent has to offer and we look forward to many more in future.

SATORI EMBASSY WILL OPEN DURING BBB2B

Bellissaria's final embassy to Mainland SL will open as part of the Ambassadors Day programme during BBB2B. The formal event will be at 12 noon SLT on Wednesday, January 26th day . Watch out for the official invitation in BBBug, Bellisseria Citizens and our other usual group channels. Alternatively you can pick one up at the temporary embassy building at BBB2B itself.

The key ceremony will be preceded at 11am SLT by a Meet & Greet at the Satori Embassy with H.E. Bijoux Barr. H.E. Yuki will be organising a Bus Tour to arrive at that time. After the Embassy Opening at 12 noon SLT,  there will be a short tour around the embassy and then guests will be directed to a teleporter to the Dance Garden at the Bellisseria Fairgrounds for an After-Party featuring a special performance by famed SL composer and musician Bsukmet. If you don't know his music already, you are in for a treat! Your editor is both his friend and his fan.

Her Excellency Bijoux looks forward to welcoming you to her embassy, which completes our diplomatic representation to the rest of SL. Our still-new continent now connects the mainland continents geographically and we at the BBB hope our corps diplomatique can help bring SL together in other ways too.

The newest member of our staff is artist AmandaT Tamatzui, who will be assisting Sun in the design of future passport stamps and other art/design endeavours. We welcome her to our shiny-trousered, paper-pushing band of virtual apparatchiks! Please make a point of saying "hi" to her if you see her around BBB2B.

There are many new stamps to collect as from tomorrow, but they're not all at locations. They are mobile stamps issued by Bellisseria's diplomats and the BBB's bureaucrats from SSiDs. These are tablet computers we will be carrying during BBB2B at the Bellisseria Fairgrounds that will apply a personal, signed passport control stamp when you click on them.

You can also collect the event stamp from BBB2B, which is the 300th passport stamp we've issued. You can get your entry visa to the Old Continent, Sansara, from our new embassy there.

Finally, there's a wonderful build to explore at No Excuses. Check it out and collect the new stamp.