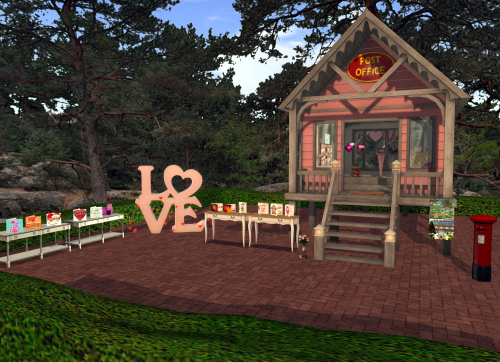 The BBB Postal Service has set up a special office for Valentine's Day.
Teresa Firelight and Boo Rojyo have created a range of 11 different Valentine cards. You can get them for free from the special office to send via BBB’s Postal service to your friends, lovers and would-be valentines.
You can add your own message which 'local chats' on touch. You'll need to take your card home to rez and personalise it. Simply rez it, write your message in the description section using the SL editor, then take it back into inventory to send.
We also recommend you rename it; such as “To Suzy from Fred [Rez Me]”  The way SL works, if you wear/add the card to change the description field, it wont “stick” and your message will be lost, so be sure to rez it.
To send it, as usual,  drop it on the red British-style post box at any BBB Post Office. Your Valentine doesn't need a BBB Postal mailbox to receive it. If they do have one, it will notify them of incoming mail and allow them to collect it at home. If they don't have a mailbox you will have to nudge them to check for mail at any BBB Post Office.
The service works across SL. So show the love on 14th Feb!
Article/Photos by Teresa Firelight and Boo Rojyo 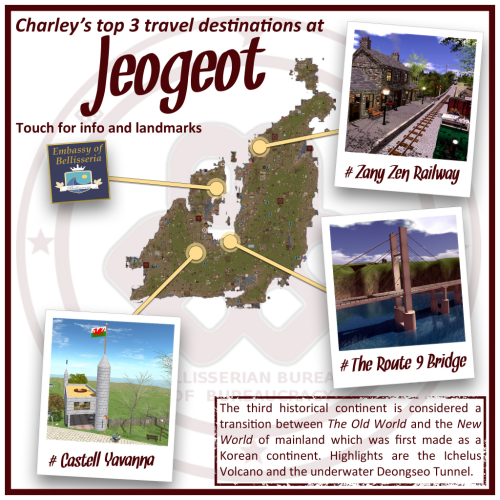 This week, we're putting on our travel boots and hiking around Jeogeot to visit three tourist hot-spots recommended by H.E. Charley Mayne to begin your study of that fine continent.

Our first stop is at one of your editor's favourite builds in Second Life®, the Zany Zen Railway. The ZZR is one of the few Multi-region narrow gauge railways in Second Life.

Your editor grew up in Wales – the land of song, rugby and cute little railways. The owner and builder of the ZZR, Zen Swords-Galway, used to take her family holidays in Wales as a child. This great little railway of SL is based on her memories of those happy times.

Since first we visited, development around the railway has burgeoned. Just as in the 19th Century in real life, development has been stimulated by the presence of the railway. People want to build alongside it so although Zen has reached her limits in terms of her SL tier, she's served as a catalyst for others to expand the build.

Our visit happened to coincide, for example, with the open day for the new fire station in Seogyeo, which was very well attended. 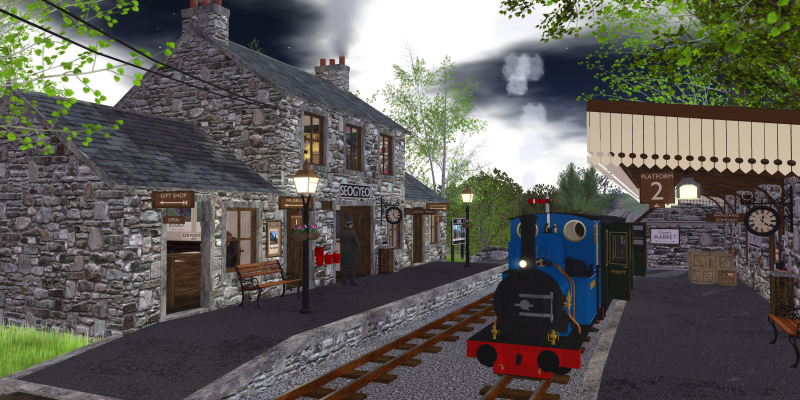 The ZZR is a brilliant little build made from prims by Zen and converted to mesh. There are stations in four regions and goods and passenger trains run 24/7 at regular intervals. The full round trip takes about twenty minutes and is – in our humble opinion – one of the most fun SL experiences. Give it a try! 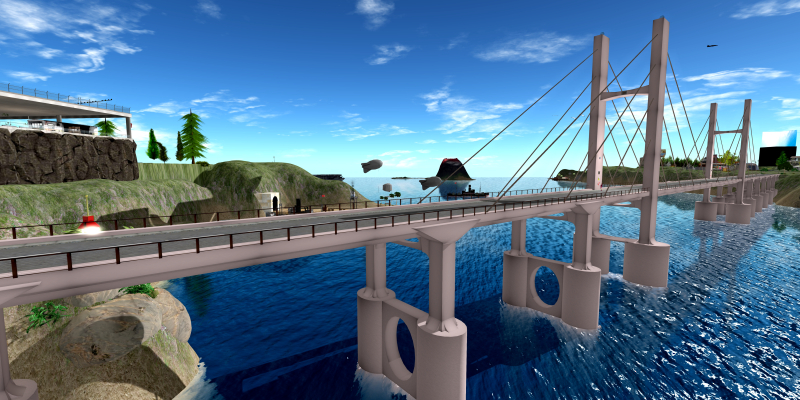 The next attraction is an impressive piece of LDPW infrastructure; the suspension bridge that carries Route 9 across the the war-torn Jeogeot Gulf. It tests the limits of SL draw distance to capture a good photograph of this massive structure, let alone to take in the naval traffic and barrage balloons as well as the planes (and airships!) taking off and landing at Jeogeot Gulf Airport nearby. It really is worth a visit to experience it yourself. 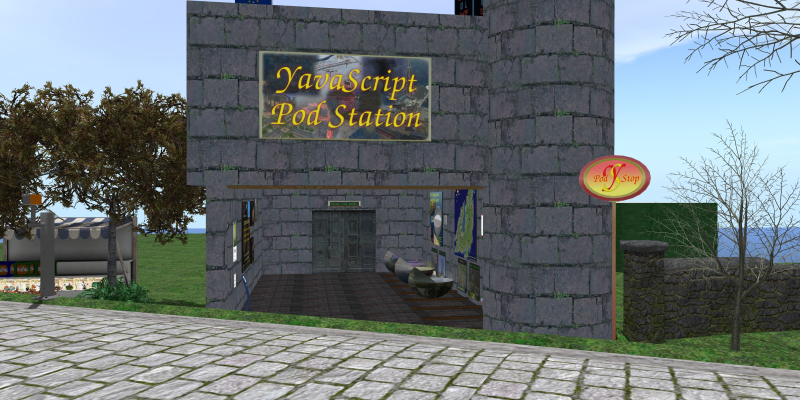 Finally this week, we visit H.E. Charley's third recommendation; YavaScript - Castell Yavanna. This was Yavanna Llanfair's first land in SL in 2007 and is  the original home of her much-loved pod tours system. This is where she opened her very first pod station in 2010 and you can still board seven different guided tours of Jeogeot here.

Coincidentally, there's another connection with your editor's RL homeland here. Yavanna's SL surname Llanfair is a clue, as is the name of this parcel. Castell is Welsh for castle, so Castell Yavanna is is Yavanna's Castle. Her profile says "Siarad â fi yn Gymraeg", which means "speak to me in Welsh".

There are few SL'ers who have not taken one of Yavanna's pod tours. Most of us have lost count how many. They are an SL institution and a great way to get to know your way around as they provide a commentary along the way. As the world returns to the idea of metaverses, SL is beginning to seem old. Yet it still seems pompous to write of its "history". There's no denying however that this build is historically significant. Take a look and take a tour! 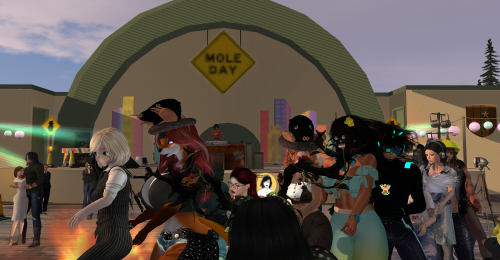 You can plough a lonely furrow in Second Life® if you want to. There are SL hermits who build or create alone. For most of us though, it's all about community. Bay City's Moles Day, an annual celebration of the LDPW contractors we know as "the Moles", is a good example of an SL Community coming together. It was held last Sunday at the Bay City Fairgrounds.

The Moles built, yes Bellisseria, but so much more besides. Their first project was Bay City, which makes it the perfect place for an event to celebrate their contributions. 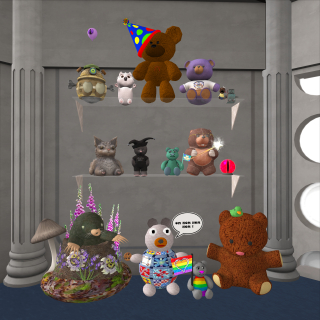 Many Moles attended so residents had chance to talk with them, dance with them, thank them in person – and ask them for their bears!

Linden Bears are a cute SL tradition begun by Nicole Linden. When you meet a Linden or Mole in-world, you can ask them for their bear. (The first was a  teddy bear so – whatever form they take – that's what they're called).  One of our stamp-issuing locations, Bear Castle, has a vast collection you can visit.

H.E. Yuki Yeshto led a group expedition to the BC fairgrounds by helicopter and bus. A wonderful time was had by all.

Congratulations to Bay City's citizens for organising such a great day out in the very best traditions of SL. Once more, we offer thanks to our Moles for all they do to make our old metaverse special.

The first new location this week demonstrates – following all the recent openings of Bellissarian embassies to the other mainland continents – that diplomacy is a two-way street. It is an embassy to Fantasseria from the Sansara region of Ross, which claims to be "the magnetic centre of the mainland". We are delighted to welcome it to Bellisseria's friendly shores. There will be an open house hosted by His Excellency Hopalong Kerensky, the ambassador of Ross, today – Saturday, February 12  – from 12 to 2pm SLT. Music will be provided by DJ Suzen Juel.

The next stamp-issuing location is a travel agency; an LDPW build in Jeogeot run by the firm of Mole & Mole. The SL Moles being involved you'll notice a very high-tech approach to virtual travel. Click on a leaflet or poster and you'll be offered an LM to visit later, or an immediate TP. Match that, real life travel services!

There's a cool new party place on the Corsica coast called The Decks. It's a cliffside location on a series of – you guessed it – wooden decks. Your editor had partied there with friends before but when returning to photograph it for the BBB Online Travel Guide took the chance to explore. Apart from the main party deck, there are spa, jacuzzi, sauna, clubhouse and media decks. There's also a dock with access to public waterways.

Finally, an old location has been relocated and reclassified. If you already have the Stonehenge stamp, please note this is the same one so be careful not to get a duplicate. It has also been moved from the Nature to the Leisure & Activities section of the Online Travel Guide.

Wow, even I didn't know about the Seogyeo Fire Station open day. It never ceases to amaze me what people can dream up in the metaverse. Thanks for highlighting it, Dave!