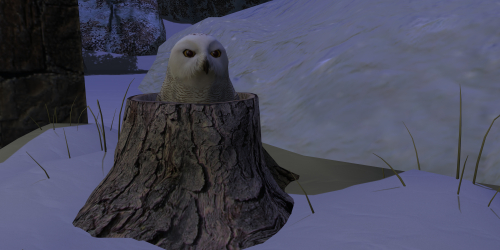 Our Second Birthday Party at the Bellisseria Fairgrounds – BBB2B – came to an end on Monday. We hope Oscar the BBB Snowy Owl found a safe home somewhere.

Our winter landscape was home to our teams of diplomats and bureaucrats for a while. We will miss it now it's gone and several of you have told us you will too. Don't forget you can revisit it by watching the BBB2B Movie from our friends at Pring Productions.

Gemma Cleanslate over at the SL Newser has been reporting comprehensively on BBB2B. You can read her enthusiastic thoughts on our birthday party here and here. Thanks, Gemma. I was only teasing when I said you were making me, as editor of the Gazette, redundant but you certainly made this article a lot shorter than it would otherwise have been!

The BBB staff are exhausted after putting in long hours at the Fairgrounds, but it's a contented exhaustion. We do what we do for fun – ours and yours – and hard work though it was, BBB2B was fun!

All that remains to say on this subject is a heartfelt "thank you" to all our visitors. It was great to meet you all and we hope you enjoyed yourselves. You and your enthusiasm made all our effort worthwhile.

The BBB has more up its sleeve for you. Bookmark the Gazette and watch this space for all the news that's coming your way of new locations and new products. 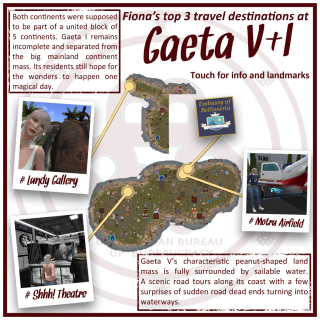 Visitors to BBB2B seemed to enjoy the posters in the Fairgrounds Embassy for the seven other mainland continents where Bellisseria has embassies.  Each featured three locations recommended by the Hon. Ambassador; not necessarily ones that feature in the BBB's Online Travel Guide. In the coming weeks, we're going to visit them all.

Fiona Jogiches, Hon. Ambassador, suggested three places to begin your explorations of Gaeta. Motru Airfield is, as she says in her guide, a close neighbour of the embassy. You can rez your own aircraft there so it's a good way to pay her a visit.

It's a nice build, with better landscaping than most severely practical SL airports. It's small but the facilities are attractive, as befits an airfield set up for private aviation. It is owned and operated by Virtual Air Airlines™, which bills itself as: 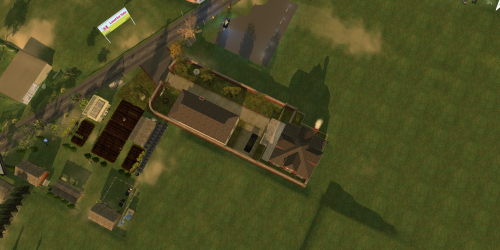 We took off in the editor's helicopter for some aerial shots of the embassy before being rudely ejected by a neighbouring farmer's security orb. Such is SL aviation!

A better pilot, focussed less on his photography, might have more sensibly hovered over nearby Route 7!

Fiona's next recommendation is the Lundy Art Gallery; one of the largest and best-known in Second Life®. Proprietor Lee1 Olsen is an SL veteran, having first rezzed just months short of eighteen years ago. His huge private collection of art is the heart of the gallery, supplemented by the exhibitions of invited artists. The sign at the entrance says:

WARNING: You are about to enter someone else's dream

In a sense that's true of of every build in Second Life® but Lee's dream is one in which you could – if you have the slightest interest in art – lose yourself for hours.

Fiona's final introductory suggestion is already known to many readers as it has long featured in our Online Travel Guide. The Shhh! Silent Movie Theatre dates from the days when movies were both monochrome and silent. The build itself is in black and white!

it's a fun atmospheric place showing classic films, and every Wednesday there's an 8pm SLT Matinee also a Featured Film of the Week and it's all free.

You can also collect a stamp for your Bellisserian Passport there. 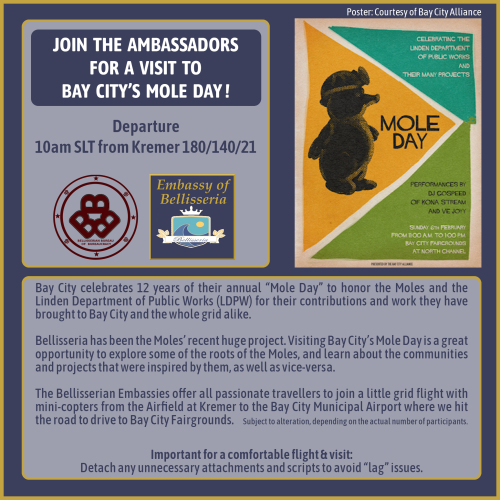 The annual "Mole Day" in Bay City will take place tomorrow, beginning at 11:00 a.m. SLT. This year’s event will feature DJ GoSpeed of KONA stream followed by a live performance by Ve Joyy at 12:00 p.m. SLT.  It's at the Bay City Fairgrounds in North Channel and is open to all Second Life® members who appreciate our wonderful Moles and want to celebrate their contributions to our world.

Bellisseria's diplomatic corps is organising a tour to the event, departing at 10am SLT from the airstrip at Kremer in Sansara. All are invited to join this trip to the Bay City Fairgrounds by air and land under the expert guidance of experienced tour leader H.E. Yukiko Yeshto.

As always on such vehicular expeditions, please be careful to remove all unnecessary HUDs and other scripted accoutrements, as that will increase the chances of a safe region crossing for the aircraft and road vehicles involved.

Those of you exhausted from pursuing all the stamps available during BBB2B may be pleased to know that we only have three further new locations to visit today. They are all in our native Bellisseria so you don't even have far to travel.

To end this issue as we began – with a snowy owl – we first have Hedwig: a Fantasseria tribute to Harry Potter named for that young wizard's mail-delivery bird.

Then we have two new LDPW locations. First is Skunk Creek Overlook, a wonderfully scenic coastal overlook in the Log Homes regions. Your editor is SO returning there with his motorbike to explore those dirt tracks! Finally we have the picturesque Gigglesnort Falls among the camper homes. It's well worth a visit on your next nature ramble or dirt bike expedition.

Yes, a contented exhaustion all round in the BBB after BBB2B! Thanks everyone, team and visitors, who made it a success!