We were delighted to welcome Patch Linden to our new HQ last Wednesday for his first visit. We reported on our regular activities, including the Post Offices and the Mainland Passports, and then discussed other ways we might be able to contribute in future.

It's always good to see and chat with Patch and it was an opportunity for our newest recruits, Robert and Amanda, to meet him for the first time.

Unless you arrived very recently in Second Life®, you will have lived somewhere other than the less-than-three years old Linden Continent of Bellisseria. Most Bellisserians have an emotional connection with, and knowledge of, other SL continents. For example, your editor bought land on the then-new continent of Satori back in 2007 and still has substantial holdings there for projects that don't fit in (or above) his beloved houseboat.

If your mainland connection is with the continents of Heterocera or Jeogeot, would you consider being an Honorary Ambassador there? Those two vacancies have arisen in our Corps Diplomatique and you are cordially invited to apply for either post. 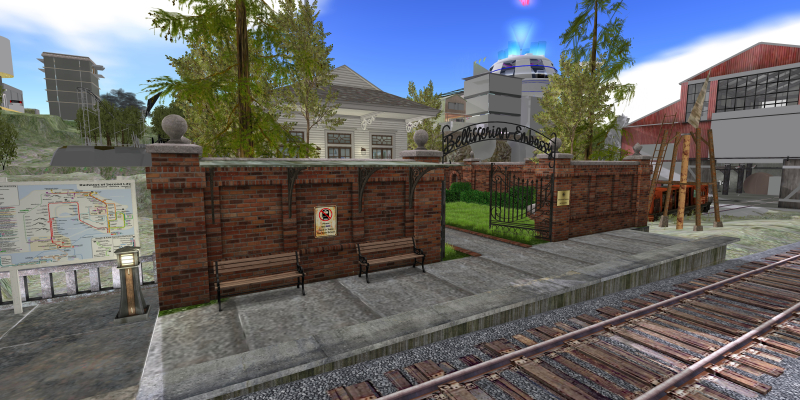 The role of Honorary Ambassador is to promote Second Life® in general and in particular to build community spirit. It's to encourage exploration, geographical knowledge and social interaction. You would have the use of the local embassy and other assets. You would be expected to organise events at the embassy and elsewhere. You would have the support of our team of ambassadors and bureaucrats - and of course The Gazette.

Honorary Ambassadors have considerable independence and all go about the job in their own distinctive way. They are already growing closer as a team and helping each other out with ideas and mutual support. If you think this could be for you, please apply in-world to Boo Royjo. Drop him a notecard with information about your background and experience in SL and your ideas for what you would do if you were appointed.

The delightfully-if-enigmatically named Scandalous Gout on the Cove – is a Bellisseria stilt home open to the public. It has water & road access and "tons of fun activities."

Our other new permanent location this week is the motorsport/street-racing region of Daikoku. It is a "Car & Drift Community" on a private estate that hosts competitive and community events, such as the annual Daikoku Drift Championship. You'll land in a drab car-park hub location, but use the nearby teleporter to find your way around.

Finally we have the limited-time event stamp for District X - 2042 at the Bellisseria Fairgrounds from March 31st to April 5th. Don't miss it!

As always, please click on the images of locations and/or stamps below to enlarge them.