The Road Not Taken | New Locations

THE ROAD NOT TAKEN

I shall be telling this with a sigh
Somewhere ages and ages hence:
Two roads diverged in a wood, and I—
I took the one less traveled by,
And that has made all the difference.

SL has always presented itself as bodies of land and water where residents move, interact and build. Yet many of us teleport from place to place without a thought for our virtual world's "geography". We at the BBB and CPCB have a mission to help residents be explorers. We won't judge you if you flip from terminal to terminal without even waiting for the textures to rez, but you're missing out on a lot of fun if you do.
Many of us have inventories full of motorcycles, cars, sailboats, locomotives and planes. Some of us even have airships! We could teleport instantly to anywhere we travel, but we enjoy exploring SL's virtual spaces. We're not alone. The marinas, airports and transport hubs in SL exist for a reason. Many residents love hauling virtual goods using GTFO!  Others love going on Drivers of SL rallies, taking part in the Bellisseria Boat Parade or joining our own Yuki Yeshto's guided bus tours. 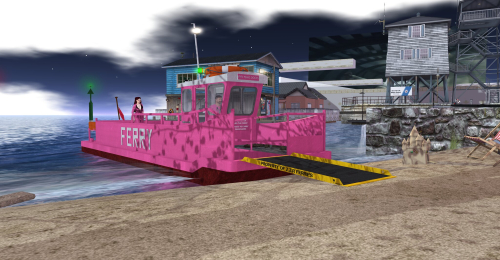 You don't have to do it in a group though. The Pyri Funfair – for example – is a legacy SL destination, where the Moles long ago built a rather sinister game. It's now a passport stamp location, so you can have a memento of your time there. You can teleport in, play the game if you like, collect your stamp and leave. Or you could make an adventure of even getting there. You could sail there from Bellisseria or Jeogeot. You could incorporate a train ride by taking the ZZRR to Little Coverston and then catching the regular ferry to Pyri Peaks and the funfair.
So why not take the road, waterway or air route less traveled? Nothing builds friendship in Second Life® like a virtual journey, so  invite a friend along. You may find you make new friends along the way.

Our new location this week is Saint Aubrey Airfield and Marina. It occupies one of the Du Sud Isles, a group of private estates between Corsica and Nautilus which provide good sailing waters. It's a beautiful spot to visit, even if you're neither a sailor nor an aviator.