Your editor is taking his beloved sports car on a real life road trip this week - the first since the miserable COVID times. He won't be around on Saturday to publish at the usual time, so The Gazette is being released early. Normal service will be resumed next week.

Lethra has been in SL for less than four years and yet is already the owner of three airports, including the Gateway International Airport in Sansara, which bills itself as:

The entry point to Sansara and Heterocera for air and sea traffic from all over the mainland. 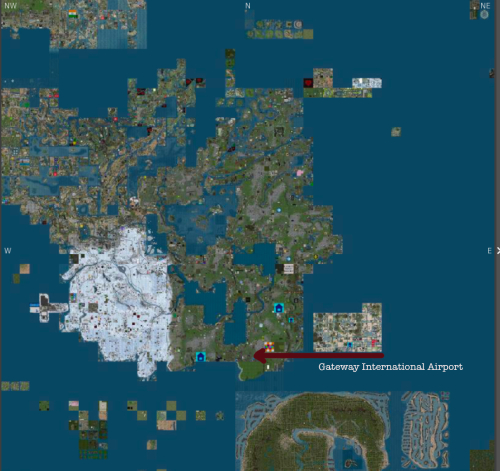 Given its location, it's also a transport hub for traffic between those mainland continents and Bellisseria. Dave from The Gazette interviewed Lethra about her Second Life®. He asked her how she came to be into SL airports in such a big way and she said that aviation was an RL interest too, but that it is "way cheaper" in SL.

Asked about the "gateway" role of GIA, she said it was an easy way to arrive in Sansara. by air.

Easy. Land your plane at Gateway, rezz a car, and follow the signs for the nearby towns. Boom, you're in Sansara. Make your way to the northwest of the continent and you can connect to Heterocera by boat.

As for the connection to Bellisseria, she said;

If you're asking how the two will be physically connected, I'd say just by sea and air, at least in the Sansara area. It would be cool to have some kind of road/rail tunnel between the continents, but I just don't see LL going for that, given the quiet suburban vibe they're going for in Bellisseria.

We love the idea of an intercontinental tunnel. That would indeed be great - and our friendly Moles have provided tunnels elsewhere so perhaps it's possible – or maybe even a bridge? 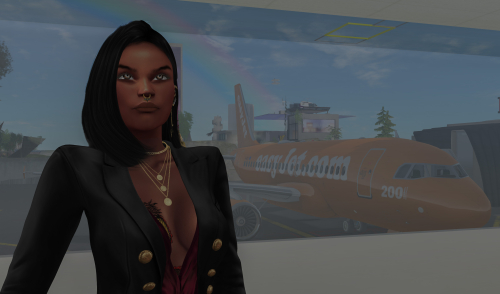 If you're asking about the interaction between Bellisseria and the other continents, I think organizations like BBB are critical for getting Bellisseria residents to explore the rest of the mainland, and that they should work with groups like Drivers of SL and the Skyward Flying Club, who regularly take their members on excursions through the mainland. That would help residents of all continents appreciate just how much is available outside of the skyboxes and private islands.

On that point, Dave asked if, as Bellisseria continues steadily to connect the older mainland continents to each other as it grows, if she thought more SL residents would become interested in exploring SL by land, sea and air? Or will most still teleport from place to place without any thought of geography?

That depends on two things: publicity, and Linden Lab making the mainland as transportation-friendly as possible. I know people who had no idea the mainland existed for years but became enthralled by it once someone took them for a flight, drive, or sailing trip. I was one of those people for about a year and a half, until someone took me flying. Had it been better publicized, I would have done it much sooner.

The other major impediments to growth, though, are things like security orbs set to teleport people home instantly, and other methods of preventing anyone from entering a parcel under any circumstances without being invited. Even in Bellisseria where the covenant puts clear restrictions on orbs and ban lines, people either don't read or ignore it, or even get visitor trackers and manually ban anyone they don't recognise. Getting randomly teleported home or bounced out of a parcel for doing nothing wrong is no fun, and it turns a lot of people off to the whole experience. Ask anyone who owns an airport outside the Blake Sea!

Drivers, pilots, and sailors need to advocate constructively, and work with LL on ways to keep the seas and skies (especially the skies) open to everyone who plays by the rules.

There will always be a certain crowd who join SL exclusively for stuff that doesn't involve recreational transportation, or who will try it once, hit one ban line, and give up. But I find that the more time people spend on SL, the more they want to branch out, and if they're made aware of the mainland as a target-rich environment in terms of places to spontaneously explore, many of them will want to try it out.

Dave asked her about the Greek Theatre she's built at Gateway International. What was the idea of that? Will there be performances there?

Gateway is a flat airport on top of a mountainous region, which lends itself to building things beneath the runway. It actually looks kind of silly if you *don't* build something underneath. And many SL airports connect to nothing in particular, even if they're also accessible by road or water. I decided to shake things up and take advantage of the topography to make Gateway a destination in itself, not just a stop on a journey. So I hopped on the Marketplace and bought myself a Greek amphitheater and a convention center.

We are planning an art exhibition in the convention center soon, and are working on getting some events going for the amphitheater as well (if you're interested, drop me a notecard). It's a great space and can be used for many things--plays, live music, even open-air art displays.

We're grateful to Lethra for agreeing to be interviewed.

Article and Photograph by Dave

We have a new coffee-house destination in Jeogeot this week, a treehouse in Nautilus and a volcano in Sansara. The first belongs to Buttacwup Pwincess and the others are LDPW locations build and tended by our beloved Moles.