The BBB is very happy to announce that our headquarters office now features in the SL Destination Guide. We hope this will help even more SL'ers find us and join in the fun of exploring SL with our Bellisserian Passport or the CPCB's Mainland Passport. 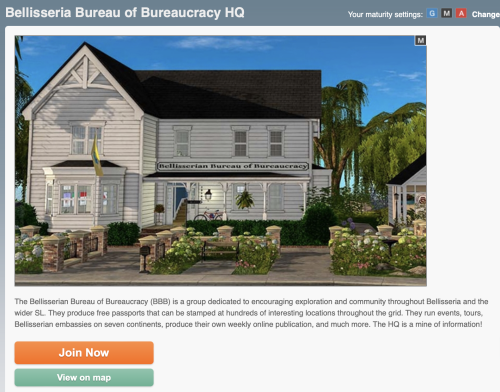 The celebrations at the Bellisseria Fairgrounds for the third anniversary of the founding of Bellisseria were a huge success. For those of you who missed it, here is a video Sceneris made of Patch Linden's speech opening the festivities and announcing what is now known as Sakurasseria – the new Asian-themed Linden Homes that are coming Soon®.

For those who missed Delain's impressive particle show, Robert Rhodan filmed it and his movie can be seen on YouTube here. Freddie Harrington also posted some photos of the show on his Flickr feed here.

Daniel Voyager reported on B3B at his long-running eponymous SL Blog and gave a good short history of Bellisseria too.

The folksy village-fete type activities on the Bellisseria village green went down very well with the B3B revellers. Many people took part in the folk-dancing organised by the good people of Hooten Haller, for example. All available dance pads were in use and the events were extended beyond the planned times. As were the more modern dance events too. All the DJs did a great job and the dancers just didn't want to stop.

There was also a good take up for the Easter egg hunt organised by our own dear Teresa, with 108 people claiming their prize of her custom-made Bellisseria baseball cap. Even more popular – and also great fun – was Teresa's make your own plushie sewing stand in the Arts & Crafts tent based on Keiko Zoon's scripts. Robert made a movie of his own successful efforts to sew a plushie, which you can view here.

All in all, people seem to have had a great time. Forza Bellisseria! Onward to a fourth year of SL community and fun.

The first update this week is a new location for an old location. Le Messier Airfield is now here. Not a new stamp though so be careful not to get a duplicate.

Speaking of airports, the first new location this week is Customs at Gateway International Airport. Regular readers may remember our recent interview with the owner, Lethra. Next is a DFS farm and a proud member of the Bellisseria DFS Farmers Co-Op; the Circle B Ranch. The Moonshine Motel in Heterocera is the latest build from our old friend, Cranston Yordstorm and is on the wrong side of yet more of his railroad tracks. Also in Heterocera is Hiraya Town Station, serving a Japanese-themed group of regions of which Hiraya Town is just a part. Finally