AMBASSADOR GOSSIP: CHECKED IN AND STAMPED IN HIRAYA 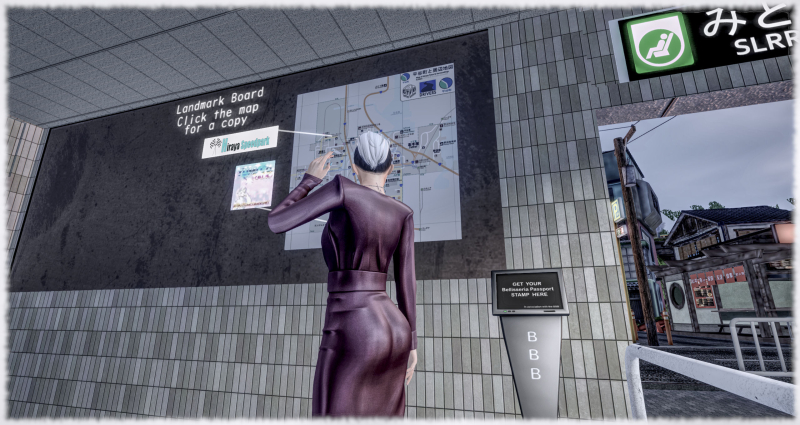 For Her Excllency, Hon. Ambassador Raynier, it was one those days in the office when you've a nagging feeling there's something you've forgotten.

I was sitting at my desk, a cup of coffee in my hand, and suddenly it hit me. I had forgotten to register with the Heterocera local authorities and get my visa.

She hurried to the train station, which fortunately is adjacent to the embassy. Shamefacedly, she admitted;

In my excitement, I even forgot to take a ticket from the vendor before boarding the train.

Line 3 took her from Tersa directly to the Hiraya train station. From there, she did not have to walk far. The passport stamp machine can be found near the exit to Hiraya Town station and soon the visa stamp was applied.

As a Bellisseria citizen officially residing in Heterecera, I was relieved

she admitted. But a big surprise soon followed. After a short chat with the lady behind the ticket counter, she found no visa is required in Heterocera!

All the excitement was for nothing!

After this bureaucratic farce, the ambassador decided to walk back to the embassy to relax and calm down. After studying the city map, she found a suitable route  to Miyako and Hiroachi Hill in the south of the city.

If I hadn't had that mishap, I wouldn't have found the beautiful Yumi's Café. Ending a nice day full of first impressions in the city with a big piece of cake and a lemonade is certainly not the worst thing.

So the afternoon had a happy ending and Hon. Ambassador Raynier was also able to get acquainted with the café's owner.

I can only recommend everyone to visit and explore this beautiful, detailed city and, honestly, it doesn't have to involve a bureaucratic panic!

She smiled as the second piece of cream cake was placed on the table. 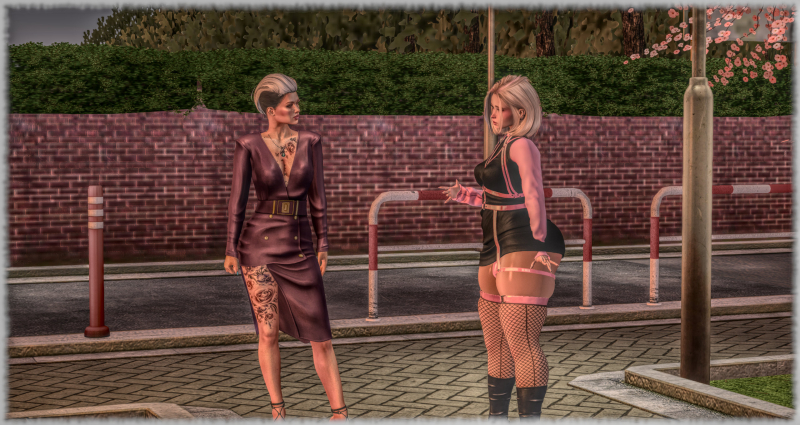 We continue our Meet the team series with Sun (Dark Sunflower). She is one of the longest serving team members and deputises for Boo (our Founder and CEO) when he is away on RL business..
1. How long have you been in SL?

I've been hopping around from theme to theme since June 2019.

The serene environments of Belli, they fill me with a sense of relaxation and peacefulness, feels like coming home.

I got my Bellisserian Passport on Feb. 3 2020. (In those early days the passport was just a texture.) I saw our founder, Boo, post a notice to find someone to help him make passports. I loved his idea and went for a job interview -- and he "hired" me. In the following weeks, we talked a lot about the passport. Boo mentioned, "What if we had a real passport where we could put stamps in....." And the rest is history :)

I am the founder of our stamp design department, which I have now left in the capable hands of Robert and Amanda. This lets me spend more time on new product development / design and building BBB event exhibits. However, I still create stamps when demand is high and time permits.
As of late I'm combining this with covering for our CEO Boo, since he and his wife Fiona are on a well deserved hiatus.

The funniest thing that I remember was when I was a race steward when we had the stamp tour collab with DoSL. I was posted at the mermaid caves, when all of the sudden the Belli Sea Monster showed up and tried to eat the people that were looking for the stamp terminal. It was hilarious.

I was a very successful ABC-horse jockey in the past.

Yes! I would like to say that I'm proud of being a part of this awesome team of BBB volunteers! The official inauguration of Her Excellency Dariah Raynier will take place at  the embassy in Heterocera on May 28, 2022. Yuriko Kimura, Mayor of Hiraya, will officially present the keys of her embassy to the new ambassador.
After the ceremony, the new ambassador and the Continental Passport Control Board invite you to join us for a party to celebrate the occasion. Mandy Dorfler, DJ at Harlow's Women Club, will spin music from the genres of Rock, Blues, Metal, Alternative, 60s, 70s, 80s and Romantic. We look forward to your company for two hours of fine entertainment.
The event will start with the official part at 12:00 noon SLT. The party will start at 12.15 pm SLT. The embassy in Tersa is easily accessible by public transport.
ROBERT'S REZ ZONE MAPS
Robert Rhodan's first maritime rez zone map (building on the splendid work of Jon Ree and Kittensusie Landar) was well-received. He's already updated it as well as adding a second to the series. Here they both are. 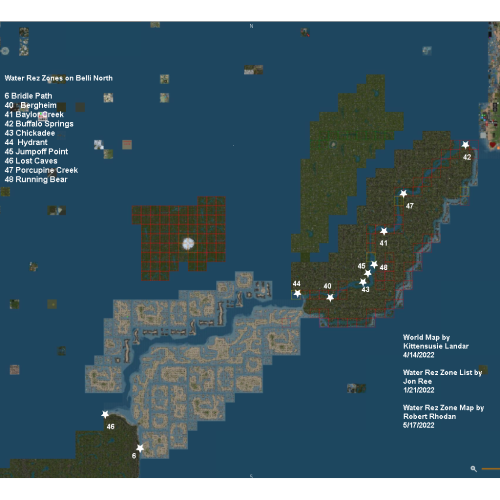 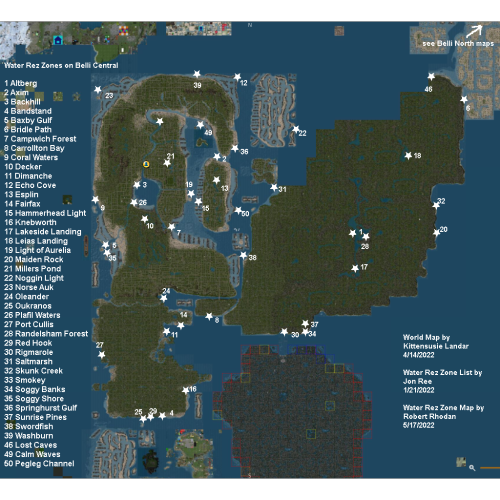 click to enlarge
By popular demand, a dispenser at BBB HQ is now issuing these on demand so you can have your own copy in-world without having to pay an upload fee. As Robert adds more to the series they will also be added to the dispenser.
Map by Kittensusie Landar. Rez zone data collected by Jon Ree. Data mapped by Robert Rhodan.
NEW LOCATIONS
This week's new locations feature two clubs in the same region and a popup art gallery. Your editor must declare a personal interest in the last of these, a joint venture between his Limoncello Art Gallery (founded in 2007) and Cate Infinity's Infinite Productions. This is the fourth popup in a series taking art into places you'd never expect. The exhibition formally opens with a party on May 28th at 4pm SLT but the art (and the stamp terminal) are already in place for previews by our readers.
Club Hypnotic is part of Beach Club Hypnautical and features live DJs every Friday at 8PM -11PM SLT and every Saturday at 8PM-10PM. There are two stamp terminals here, one black, one white; issuing the same stamp design in the corresponding colours. The white stamp is for the beach club and the black one is for the dance club! There's one forced landing point near the white terminal. Head in the opposite direction and follow the boardwalk to find the black one!