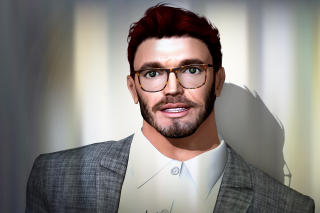 This week we continue the Meet the Team series with our news specialist, Dave (aka Lord Junibalya). Dave has been keeping us all informed of stories of interest for a very long time now. Our publication was formerly called the BBB Gazette. But when the Continental Passport Control Board (CPCB) began issuing passports to the rest of SL instead of just Bellisseria, it became simply The Gazette.

Dave has lots to say in The Gazette, but he doesn’t talk about himself much. I did manage to get a few words from him for this series. The most I got out of him was his full name:

Here is the rest of the interview:

2. How long have you lived in Belli?

The community. There's always something going on. It makes it much easier for new arrivals in Second Life® to get involved.

I enjoyed collecting the stamps and had various stamp terminal locations at my art galleries. Mainly though I thought the whole bureaucracy schtick was funny! In real life I fought bureaucracy for a living – as a lawyer – so it amuses me to play at being my old foe!

I am Editor of the Gazette and PR advisor to the leadership of the BBB and CPCB.

My job! I like it. I've blogged in RL about serious stuff for years and The Gazette is light relief. It's also really nice to find a way to contribute to Second Life®, which is – after all – only what we residents make of it. I have no skills at scripting or building but at least I can turn a phrase.

I am the youngest of 8 alts. You may have met me as any of them, but you'll only know if you friended me. I have a policy of disclosing them all to friends!

I have said more than enough. Any decent editor is far too wise to volunteer information to journalists!

Her Excellency Yuki referred us to an interesting post on the SL Community Forums by Abnor Mole on the subject of community regions in Bellisseria.

All of the community regions in Bellisseria are set up like Treeowatoor with a radio residents interested in holding community get togethers can request access to. This allows them to change the parcel stream if need be.  If anyone wants to use the space to hold scheduled events open to the public (music events, book clubs, surfing parties, or whatever) they can request to be invited to the Bellisseria Performers Group, which gives them the ability to list their events on the boards in Puffin Head at the Events Center for all residents to see.

It would be marvellous to see more use being made of the community regions, which are very much part of the charm of Bellisseria. 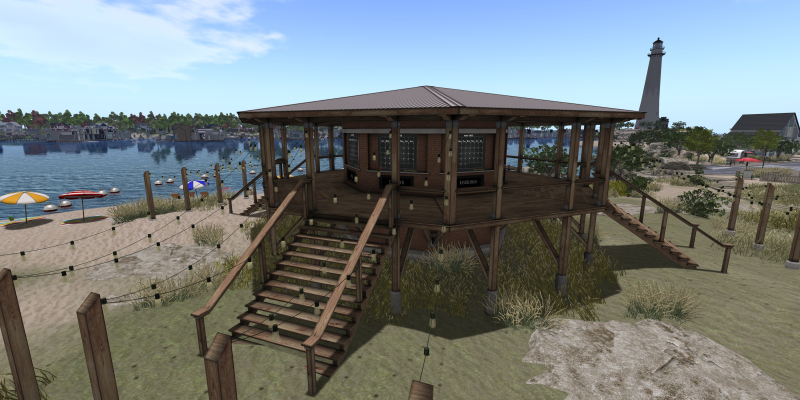 So why not apply to join the Bellisseria Performers Group, reserve a place and time at the Events Center and get residents together for more fun!?

As announced here in The Gazette, H.E. Dariah Raynier was duly installed last Saturday as the new Ambassador to Heterocera. Sun from the BBB presented her with the key to the embassy there and she was welcomed to the continent in a speech by Yuriko Kimura the mayor of Hiraya. Music and dancing ensued, with Mandy Dorfler from Harlow's Women Club presiding over a well-attended party (as seen in this photo by Sun). 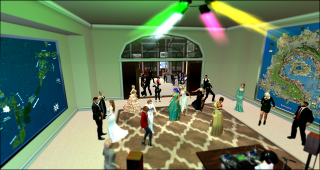 Party at the Heterocera Embassy

You can read more in Gemma Cleanslate's report for SL Newser here. Here are some photos from our very own Teresa Firelight. 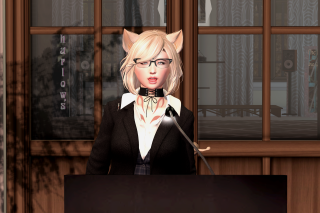 Robert Rhodan of the BBB stamp team has now published a full-length version of his movie of the recent Longboat Tour organised jointly by the BBB, CPCB, our embassies and the Vikings of Bjarkavik. Relive the experience of the tour (or should we say raid?) for 22 minutes, with a suitably rousing music track and sound effects.

We have no details to offer yet, though work on our stand is in full swing. Still we at The Gazette think you should know that the Bellisseria Bureau of Bureaucracy will be at the steampunk-themed Second Life 19th Birthday celebrations – aka SL19B. The actual birthday is June 23rd, but the celebration will run from June 16th to July 5th.

We are giving no clues as to what's on our stand at this stage but watch this space. We promise that The Gazette will first to tell you all about it when the time is right. We're not just being wilfully mysterious by  the way. The Moles have imposed an embargo on all pictures of the event until it opens.

Our staff will be carrying their stamp-issuing tablets and of course there'll be an event stamp too. So if you don't have a passport yet, now's the time to get one. If you're from Bellisseria, you know exactly where to apply. If you're from anywhere else on mainland, you can pick up the appropriate passport from our embassy to your continent (all the SLURLs are in the sidebar). If you're homeless or live on a private island, you can pick up a generic Second Life® passport from any embassy.

It was a race against time for many applicants at SL18B last year to get their passports in time to collect the limited-time stamps. Given that mainland and generic passports are available instantly now, there's no excuse not to join in the visa stamp-collecting fun. If you're Bellisserian though, don't delay. Actual bureaucrats are still involved in issuing that passport!

Our new location this week is an historic LDPW build – the Dolphin Temple at Nautilus. It's a temple to dolphins as opposed to a temple for dolphins, as the latter would be under the water not towering above it! With a little exploring, you can find a rezzer for a rideable dolphin to take you further down the canal. It is on the far side of the temple in the ocean.

My dear firend Fabby at Party at the Heterocera Embassy, proud of you

I couldn't agree more with the editor....... Send me your passport applications now!!! You might have your document in time for the SL19b rare stamps collecting fun! (Will be happy to welcome newly fully legalized citizen :-) )

Speak of an "actual bureaucrat" and up she pops in the comments! Zoe is in charge of issuing new passports so take advantage of her very un-bureaucratic enthusiasm and get those applications in now!!