The BBB will have a booth at Second Life's 19th Birthday celebration (SL19B), which opens on June 16th and runs through July 5th. There will be lots to see and do at this exhibit, including a free gift (the same Belli Hats we gave as hunt prizes at Bellisseria’s 3rd Anniversary – so a second chance to get one!)

Other things of interest include two slide shows (one of Stamp Locations and the other of Parade of Homes), information on all seven of our embassies, information on passport stamp tours and a link to The Gazette. Most of our applications (Belli Passports, Continental Passports, Driver’s License, Belli License Plates, etc.) are available on site as is a post office where you can send or collect mail.

Of course, the highlight of our booth is the special exclusive SL19B passport stamp. Our bureaucrats and ambassadors will also be there with special event-only personal passport stamps for you to collect in person. Just click on the special SSiD (Single Stamp Issuing Device) tablet computers they'll be carrying at the event.

Be sure to come check us out. We will have Teleporters at BBB Headquarters (and at each of the Embassies) that go directly to our SL19B booth. That should make it easier for you to find us. 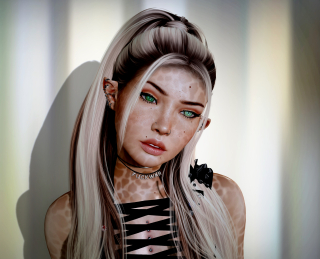 This week we will meet someone who takes really good care of the Bellisseria residents: Zoe Suki. She is very friendly, helpful and has a great sense of humour.

The community feeling, the rideable roads and paths, the sail-able waters, the pretty surroundings, and the free feeling of having NO BANLINES.

I wanted to contribute a little to this growing community and be part of it, as well as meeting new people.

The production of all passports, drivers licenses and license plates, managing the initiation office and checking if people are Belli residents or "Asylum seekers" :-P (For the last mentioned group we now have the free SL Continental Passport, so all Mainlanders can also join in the stamp collecting game while exploring new places!)

Joining a BBB boat tour on my water scooter!

If I would tell you that, it loses its mysterious charm and will become an ordinary ‘public secret.’ (She grins widely as she says that.)

Article and Photo by Teresa Firelight 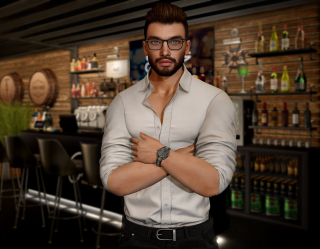 The Bar Barge, the Bar Truck and now the Bar Train are part of Greg Timmerman's distinctive fleet of unique vehicles. Greg, the mastermind behind the project, explains;

Opening another club was out of the question. I wanted to provide something new that I haven't seen in SL before.

As someone who loves to explore, he was in pursuit of the right idea. It was during a RL cruise with friends where they met in a  bar on a barge that he finally found what he envisioned for his goals: The first and main project, the Bar Barge, was born.

It took weeks and months of research and modifications because Greg is, as he smilingly says himself, "picky."

I like to bring as much realism as possible to Second Life. I usually use ready-made objects which I heavily modify to my ideas. Sometimes, I would want or need a special addition that I can't find anywhere. I am very grateful for my trusted friends and the people, whom I can always rely on, who support me when I need help for a specific object or with script work.

In September 2020, the Bar Barge could finally celebrate its first cruise on Blake Sea. After many tours, further ideas for projects emerged. Why limit yourself to just water? He created the Bar Truck for traveling by land, but didn't stop there. Exploring SL by railway was the next idea. In spring 2022, a train that suited his visions was finally available. Just a few days ago, the last adjustments were made. In an attempt to celebrate his achievements, and to give more people the chance to experience a unique way of traveling, we collaborated with Greg for a Bar Train tour on the SLRR in Heterocera. The tour (details below) takes place today, so come along if you can. 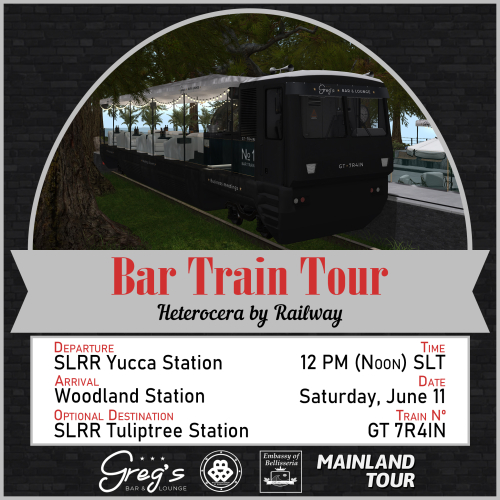 At the platform at the Woodland Station (a new stamp location) visitors can find a display that shows if and where the Bar Train is currently running. A tap on the display opens the map – allowing visitors to teleport right next to the train and easily join in the fun. A similar display for the Bar Barge can be found at the Marina at Port Victoria Isle where visitors can also enjoy a relaxing time at the Lounge or the Rooftop. Additional activities such as a playable dartboard or ridable jet skis are also available.

H.E. Ambassador Dariah Raynier visited Lunalis Railworkx on Heterocera on 31st May at the invitation of Cranston Yordstorm – SL land developer and performer. Cranston is an actor in RL, performing at venues across the USA in straight plays and musical theatre.

I met Mr. Yordstorm during our ceremony at the embassy in Tersa. Since I am interested in all kind of land development projects, we agreed I should visit.

The Lunalis Railworx is a large narrow-gauge railway across three regions (Lunalis, Sponsa and Lota) on the continent of Heterocera.  It connects to LDPW routes 1 and 6 and the Heterocera SLRR mainline. It has stops at neighboring storefronts, a performance venue, a motel, and a new volcano park.
Ambassador Raynier enjoyed a train ride through the regions and explored the places which are well worth a visit. She commented;

I wasn't dressed appropriately so I couldn't explore the active volcano. Next time I will return with my hiking boots and explorer outfit. You can't explore a volcano in shorts, a blazer and high heels!

She also tried out the Inferno rollercoaster.
After 45 minutes the little train returned to the station at Route 1. At the nearby Unity Amphitheatre she played some tunes on the piano.

I am not a good piano player, so I didn't receive an offer from Cranston to join his band. This is okay by me.

Dariah did get her diplomatic passport stamped though. There are two BBB stamp terminals there.
Article and Photographs by H.E. Dariah Rayner, Hon. Ambassador to Heterocera.

DJ FAR has had his Friday Party almost as long as Bellisseria has been around, it's the oldest weekly party in Belli and it is always a great time. On Friday, June 3rd, many of us dressed up in our Dinkie finery and hit the dancefloor! Here's kinda what it looked like.

The party is every Friday. It's not always at his home as it used to be. The locations vary these days so watch the usual Belli groups for announcements. 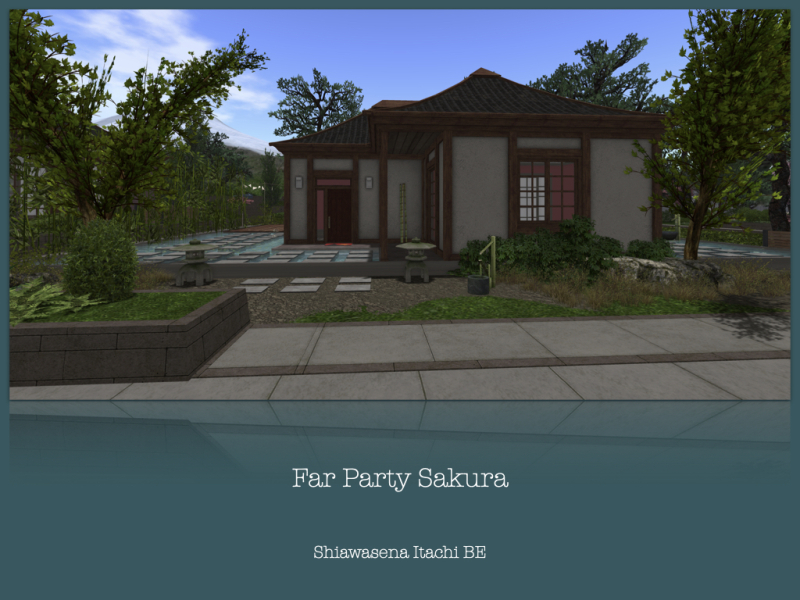 He's now moved his home to Sakura, where you can pick up a stamp for your passport. It's the same stamp as always, however – one of the oldest ones. So please be careful not to pick up a duplicate. 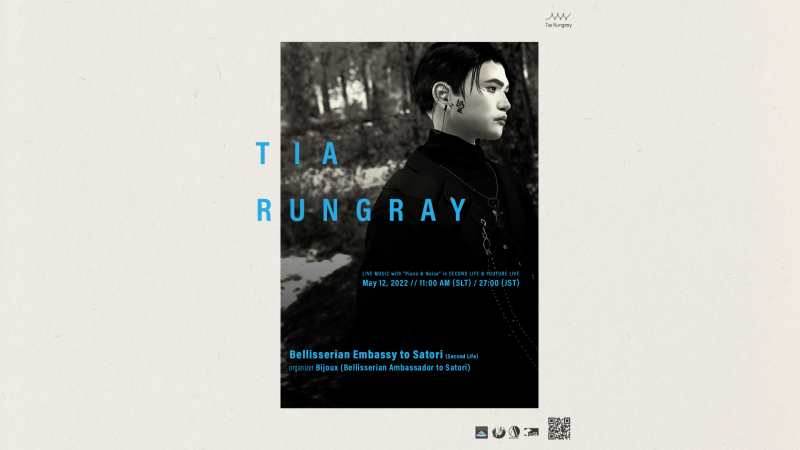 The Bellisserian Embassy and its ambassadors work to create community links between the other six continents of the Mainland and Bellisseria's residents. Her Excellency Bijoux Barr, Hon. Ambassador to Satori has invited Tia Rungray to host a performance at her embassy. She hopes that this will be an opportunity for the residents of Satori and Bellisseria, as well as other regions, to interact.

The concert will be on June 16th, 2022 and will last for one hour, beginning at 11am SLT. It will also be available on YouTube.

The first new location this week is the headquarters of Crystal Craze; an interactive game. As we all know, Second Life® is not a game, but that doesn't mean it can't be a platform for one!

We don't need to tell you much here about Greg's Bar & Lounge, as there's a detailed article above. We would just point out that Greg has placed a stamp terminal on either side of the station platform but both issue the same stamp. The script won't let you get a duplicate on the same passport or visa HUD but be careful you don't mistake the other terminal for a different one if you visit later with a new HUD on!

Finally there's a new voice café in Bellisseria to enjoy, so if you're one of those who finds a metaverse more fun when it doesn't involve repetitive strain injury and typonese, make your way over to Sakurasseria for a good old chinwag!