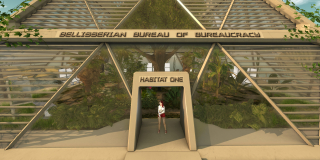 The excitement is mounting about NatureCon 2022 – the new event for nature lovers in Second Life®. The Gazette has already featured a sneak preview of the Bellisserian Bureau of Bureaucracy's stand there and details of the DRFS Ferry Service to take you to the event.

The inaugural NatureCon will run from the 18th through the 31st of August. Details of the Event Stamp appear in the New Locations section below – though the stamp terminal may not be in place until the event opens next Thursday.

Mark up your diaries, clean your hiking boots and get ready for some fun in and around the Great Outdoors.

Beeb woke early. He always wakes early; punctuality is his byword. Although his work colleagues would be nothing but pleased if he was late, or preferably never arrived at all. 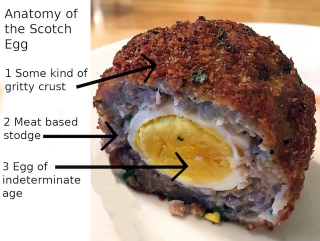 He sensed he wasn't quite himself. Was it that Scotch Egg he'd so scandalously eaten after eight in the evening? Mrs Beeb had warned him of his rash and decadent impetuosity.

However last night he was so dizzily buoyed up with elation at the apparent progress of his experimentation that a Scotch Egg had seemed minor recompense for his labours.

Those fools at the BBB would squirm and wither under the brilliant light of his reflected glory when it was revealed that he, Eustace Q. Beeb, was the man who had single-handedly improved and evolved the whole order of Coleoptera with his devious manipulations. 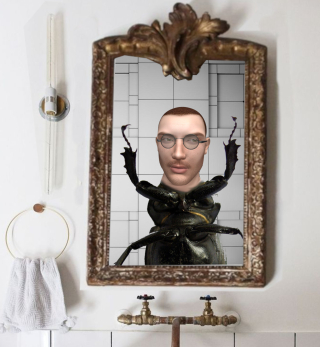 He scuttled off to the bathroom, as quietly as he could so as not to disturb the still-sleeping Mrs Beeb. That good lady's usual sweet nature could be somewhat fractious at that time of the morning.

It was the accustomed bland face that looked back at him in the bathroom mirror. However the body, well the body such as it was, was a thorax and abdomen in shiny oily black armour. His arms were thin, black, scaly, and thorny. His hands, such as they were, were rudimentary pretarsus insect claws.

It was most discomforting.

The inaugural NatureCon will run from the 18th through the 31st of August and a special event stamp (preview below) will be available for intrepid explorers who venture into SL's Great Outdoors. Please be aware that you may not be able to access the stamp terminal until the event opens. Enjoy!