I saw an announcement about a bar boat ride from Naturecon to the SS Galaxy cruise ship and back. I decided to hop on it. My friend MissB joined me. We arrived on what was literally a floating bar and lounge area, attached to a small tug boat.

We were greeted by Captain Greg Timmerman and he offered us a drink. Since it was early in the morning, I choose orange juice and MissB choose coffee. (Yea, I know… boring… but what can I say.. we had both just got out of bed half an hour ago, and it was too early for anything alcoholic). 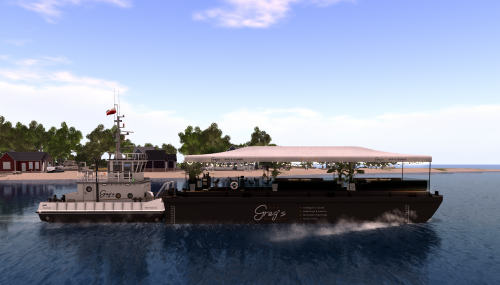 The tour itself was scenic; sailing past several small islands and docked houseboats. It took us about half an hour to travel from Naturecon to the Galaxy. The boat tour traveled back to Naturecon, but I had to skip the return trip because of some RL stuff.

In addition to departing from Naturecon, Greg offers several other tours. His dock is located here.  If you happen to arrive when the boat is already out on the water, there is a sign you can click to track the boat’s location and TP to it. People are welcome to join the cruise even when the tour is already in progress but be sure to sit down quickly so the boat doesn't sail away from you and leave you in the water.

It was fun and I recommend that you try to catch one of his tours.

Article and Photo by Teresa Firelight

Greg also runs a bar train and we joined it for a trip through Bellisseria. There was a big crowd on board the luxurious carriages and much fun was had by all! 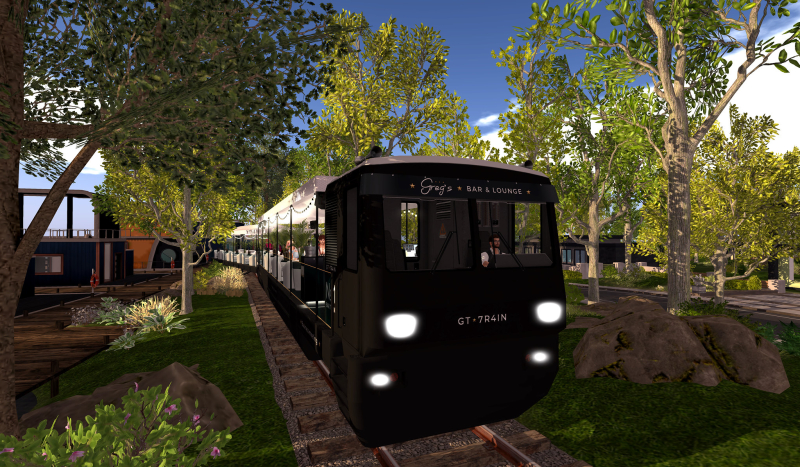 Most disconcertingly Novacoleoptera Beebii had a fatal attraction to cockroach bait from which no titanium shell would ever protect them. 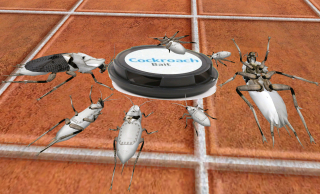 It was obvious he needed to instil some higher intelligence into these poor dumb creatures. Of course the highest intelligence he'd ever encountered was simply so readily to hand. Himself, Eustace Beeb, evidently!

Responsibly, he'd dwelt on the ethics of his plan for a full half hour. But of course depriving beetlekind of his superior intellect was far greater a crime than interfering in nature.

He selected a robust timarcha tenebricosa specimen for his most important experiment. He'd like to say he'd chosen the solid black beetle for its superior intellect, however he'd selected it on the basis that it was the easiest to catch in his terrarium.

Hooked up via silk thin tubes, cranium to cranium, Beeb began the slow process of inter-class transfer, from mammal to insect! Beeb felt a definite sensation of something momentous occurring.

It was a slow process, and his mind wandered. That scotch egg in the refrigerator, might just be past its sell by date, but it suddenly felt irresistibly enticing. A man, accustomed to subduing his every base desire, was quite overcome by the effects of the aura of success.

The beetle by his side looked just as dumb and docile as before, but Beeb was convinced something significant had transpired. It was understandable the beetle might need a little time to acclimatise to its new elevated intellect. 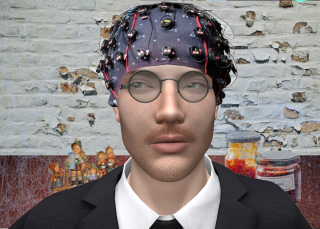 It slowly dawned on Beeb, as he noisily rummaged through the trash bin for delicious long discarded morsels of rotten food, that the transfer might not have been in just one direction. For once though he was glad the BelliBin collection was delayed.

To be concluded in the next edition of The Gazette...

Article by Boo Rojyo, as recounted to him by Mr. Beeb | photographs by Boo Rojyo | Mr Beeb's beetle collection is currently on show at NatureCon 2022

ALL AT SEA FOR A RARE STAMP

I predict that the DRFS NatureCon 2022 ferry service stamp (announced last week) will be one of the rarest in the history of the BBB/ CPCB passports. To obtain it, you must catch the DRFS ferry serving the time-limited NatureCon 2022 event (see the ferry company's website or last week's edition for details) and click on the SSiD tablet computer carried by the ferry captain.

She doesn't make it easy by lurking in her cabin throughout the voyage, so some camming skills are required on a boat that's bobbing about! I recommend you show up early and grab her while everyone else is boarding. Clickety-click, double-quick! 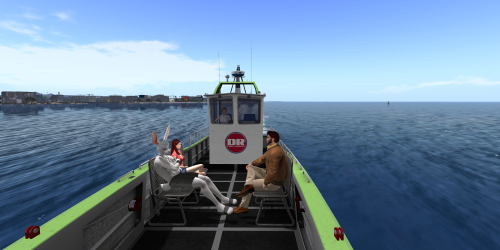 I boarded the cute ferry with its special NatureCon livery on the dock at Utopia Point in Bellisseria. I made it past the first stop at the Norse Auk lighthouse before, sadly, crashing out of SL. At least I had time to people-watch my fellow passengers and collect the precious stamp. Later I logged back in and swam the rest of the way!

As an experienced SL sailor who loves to explore our virtual paradise by sea, I know that such are the dangers of grid navigation. We are all in peril on the SL sea – especially at region crossings. But hey, there's no adventure without jeopardy! Try it yourselves while you can and I wish you all a safer trip than I had!

Article and Photo by your Editor

We are unstinting in our praises for our Moles. All we SL'ers love them. They are after all "our own" – residents just like us – recruited to use their in-world skills for the Linden Department of Public Works (LDPW). They gave us Bay City. They built us our Linden highways. They landscaped all of Bellisseria and built our homes there. 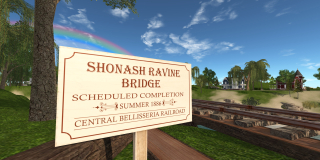 Just occasionally, however, these furry Homers nod. The new location this week is just such an example. The Shonash Ravine Bridge is very good up to a point. The point, that is, where it stops in mid-air. Not to worry though. Completion of construction is scheduled (see photo – click to enlarge)

We at The Gazette have a theory as to how such a long delay came about. Shonash Ravine is nowhere to be found on the SL World Map. The unfinished bridge is actually located at the Clayton Ravine. Perhaps, having once mis-labelled it in their project management system, the Moles have never been able to find it again to finish it?

Many Moles carry our passports and collect our visa stamps, so perhaps now the Gazette Online Travel Guide and/or the StaFi HUD will allow them to find it again and complete the work? To do so will require the exercise of eminent domain (compulsory purchase powers) however, as the Moles have now built some rather nice houses on the other side of the ravine!

Someone needs to brush up on their Back To The Future III trivia. Then the Shonash and Clayton ravines, and the resulting unfinished tracks will make some sense. ;)

Good call, Cranston! Thank you. For others also not of that cinematic era, here's an informative link:

Yay! So happy got the DRFS stamp on the very last day of Naturecon!

Congratulations, Claire. You are in an elite group of travellers.

Thanks, Dave! It's a very beautiful stamp.

Also much gratitude and the greatest respect to Lady DR herself who captained the ferry, and expertly crossed the regions in such way that we lost no one until the end of the trip.

(Though I did crash nearly immediately upon disembarking onto the NatureCon pier... lol)

The trip itself was awesome as she allowed us to be all touristy on her boat, resulting in many memorable pics.

Please feel free to share pics Claire. I’m always looking for good ones for The Gazette. Just click the “Email the Editor” link in the sidebar to send one.