Any self-respecting bureaucrat would be horrified by the free-for-all of driving in SL. You can rez a huge truck and barrel down the highway; knocking over any residents who get in the way.  What are the consequences? None! So perhaps it's surprising that our latest project was suggested by someone outside our SL bureaucracy. Three cheers for responsible SL citizenship!

The delightfully-named Persephone Emerald dropped a note in our suggestion box at HQ. She wrote;

I'd like to suggest adding a short written driving test to the driver's license process. I like that we have to do a few things and then wait a couple days to get a passport. (Anticipation makes it more rewarding.) I think there should be a bit of bureaucracy involved with getting a driver's license too.

The SL rules of the road are obviously more lax than in RL, but maybe we could have a few suggestions in the form of a written driving test? For instance, driving into someone's home is an obvious no no, but it's probably ok to cut across the corner of their yard when one comes to a sharp corner.

Our team went to work and, as we announced in the 5th November issue of The Gazette, a written driving test was promptly introduced. Never let it be said that we bureaucrats don't listen to the citizens we "serve". When you call the wolf from the forest of bureaucracy, however, don't expect him just to howl and move off! Mission Creep is inevitable. We are about to introduce a Drivers' Education system and a practical driving test. In addition (of course) to the written exam.

We are in the process of building our Vehicle Licence HQ and Test Centre – the BVLA (Bellisseria Vehicle Licence Agency). It's right by a rez zone on SL Route 7 in Gaeta V.

Building work continues, but as you see from the photograph album, good progress has already been made. You are welcome to visit.

Model citizen Persephone, caller of wolves from forests, asked some good questions in her original notecard in the suggestion box.

All these questions and more will be answered by your instructor and tested by your examiner in due course. The un-regulated mayhem of almost 20 years is coming to an end soon, thanks to Persephone and your diligent bureaucrats. 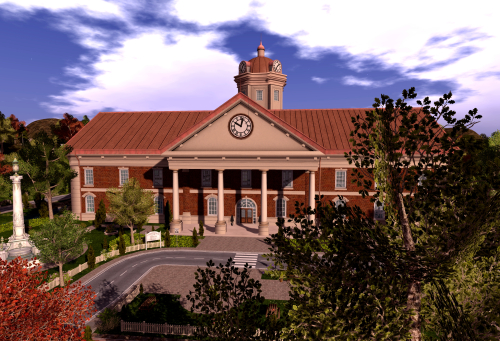 On November 22, Linden Lab announced upgrades to Traditional Style Linden Homes and a new Community Center/Region at Chippewa Junction. Technically, Chippewa Junction is not a new region, but was revamped and converted into a Traditional-themed Community Area. (I used to live right next to it in Wooremal, and I can tell you it has changed quite a bit.) It was nice before, but now it is even more scenic and impressive.

The community centre is located in Bellisseria, but all SL residents are welcome there.

The community centre is beautiful inside and out. The area has a Train Junction (complete with junction tracks, loading tanks and a ticket office), and a large Town Hall building. It also has scenic landscaping and small natural lakes. There is even a waterfall and a lovely fountain. 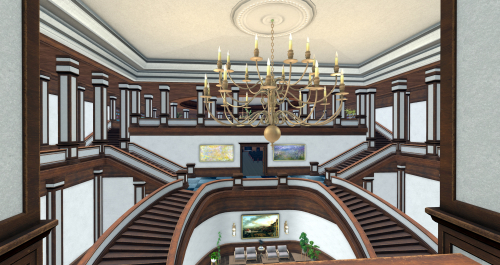 The town hall building has a very commanding entrance with a double spiral staircase. The lower level has a lobby and a small wedding chapel with cute white benches. It also has a large reception area with a bar, a dance floor and 10 round tables that each seat about eight guests.

The middle level is a very large meeting room, which could be used for anything from a convention to a concert to a large lecture hall. There is a refreshment area at the back of this lecture hall with two large tables that will seat about 24. And there are some desks and work stations on both sides of the hall.

The upper level is a massive library and reading area. 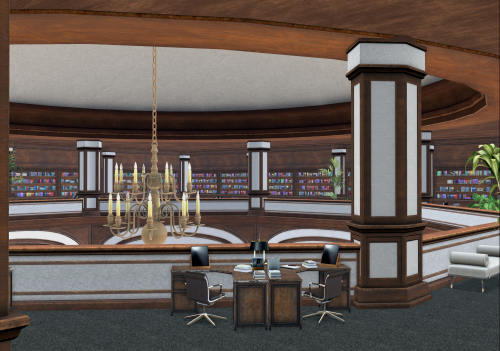 So what can you do at the community centre? First there is the obvious – catch a train, or walk around to enjoy nature and the scenic landscaping. In addition you can book sections of the town hall for weddings, conferences, large meetings, or parties. If you would like to reserve an area or book an event, here is the form for that.

And in breaking news...

There's a chance you'll be able to get a stamp for your passport at the new community centre Soon®. There's no terminal there yet, but here's a sneak preview of the stamp design.

Watch this space for further details in due course. 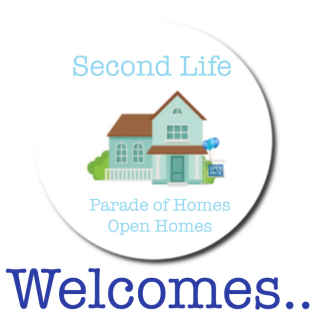 There are no new additions to the Parade of Homes this week. If you'd like to add your own home – inviting SL residents to visit – then you can find the application form here.

There's another new hangout for you at the Sea of Fables this week. It's a land-based location close to the mer grotto we reported on last week. If you see the merfolk from the dock there, give them a friendly wave!

There's a new airport location issuing our passport stamps, but the Township of Daybreak is much more than its airport so do take a look around when you stop by passport control.

Had a lovely read. I had a go at driving at the new BLVA with Boo looking on. Knowing that he is probably a good driver even in SL, got me so nervous I had virtual sweat on my avatar . Good news- Not many avatars got hurt. And at most, I only cracked a few curbs and knocked off some branches of some trees.

Thanks, Amanda. Did you pass the test?

Thanks Dutch. It’s kind of you to say so. We do try to provide unlikely fun from high grade (and utterly pointless) virtual bureaucracy!