This week's new stamp locations and some exciting news

Members of BBBug should by now have received Sun's usual notecard with LMs to new locations with passport stamp terminals. There are six this week. We reported last Tuesday on the terminal at Second Life Sci-Fi Con 2021. Many of you will already have found it there, floating in the vacuum of space. The others are

CK (ceakay.ballyhoo) is well known on the SL art scene. She has built a delightful little seafood shack at her Smugglers Cove, conveniently located for merfolk and leggers alike. 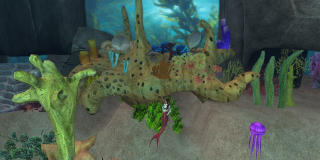 We Bellisserian Bureaucrats are nothing if not thorough in researching new locations, so when Fenella saw the Mer World sign at Smugglers Cove she magically transformed (or as she puts it, "tailed and scaled") to investigate. It's very pretty down there! If you're a legger, don't despair. You can always wear scuba gear to check it out.

Ascension Park is on SL Route 6 (the High Mountain Road) in Heterocera and near to a rez zone. The "ascension" seems to refer to the enormous hot air balloon moored there. There are also bike rezzers to allow you to explore on wheels. You might like to check behind the pretty waterfall for a cute little spot to watch the virtual world go by. The final three new locations this week are all on the SL continent of Corsica and all on its Boulevard Périphérique, the Circuit La Corse.

Wonderpark is a family theme park. Who doesn't like those – especially if you have children to tire out? Enjoy the rides! A giraffe greets you on arrival at the Little Kenya restaurant – a delightful taste of Africa in SL. Finally this week, Eschen Rest Area  is a travellers' refreshment stop on the Circuit La Corse –featuring a Visitor Centre for Corsican tourists where you can book accommodation if it's time to rest from your travels.

Pick up your passport, citizens of Bellisseria. Pop it in a waterproof bag, pack your camera and your swimwear, put on your hiking boots or driving shoes and get exploring!

The exciting news of our headline has been under secret discussion for some time since it was first suggested by our own Ghost. It has finally come to fruition by dint of a lot of hard work by our tech team. In addition to our fixed passport stamp terminals, we have now created portable devices called RSIDs (Random Stamp Issuing Devices) – and the first two have been issued to Patch Linden and Abnor Mole!

Don't even think about stalking them around the Grid though. They'll only be carrying the RSIDs at Relay for Life (RfL) charity events. The new devices will make their debut at SL HopeFest, which runs from June 9-13. HopeFest is:

5 days of SL communities building hope to support the Relay For Life of Second Life and the American Cancer Society.

So it's an excellent cause. If you are are lucky enough to encounter Patch or Abnor there, you will be able to collect a passport stamp memento by clicking on their RSIDs, which look like tablet computers. Each has three stamps and the one you receive (only one!) will be chosen at random. To get all 3 stamps from Patch or Abnor could take many attempts because you can't click on them repeatedly. You have to collect a stamp from another terminal before clicking again on an RSID. We are sure the Blues are way too smart to stand near any terminals! 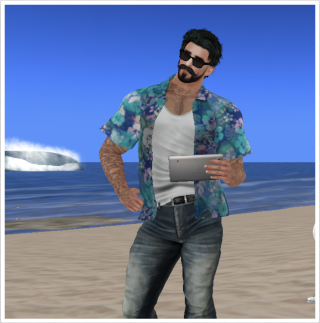 The picture shows Abnor carrying his RSID. Just click on it when you see him!

Portable SSIDs (Single Stamp Issuing Devices) will be carried by BBB staff on our stand at the SL18B celebrations. This will allow our officials to perform a personal passport control and apply their unique stamp.

Unlike the Blues, who must be impartial, our  officials have discretion in the issuing of stamps so be sure to be nice to us! It's not like we're corrupt bureaucrats or anything, but Fenella is very fond of fine Belgian chocolate. Just saying!

We think this is a great concept and are thinking of other ways to use it. Suggestions in the comments please, BBBug-ers!