I used to carry a database of hundreds of these jokes in my old Psion, so that if someone started telling them, I could outgun him. So Colin's collection today has only one I haven't seen before - with the punchline "Chelsea Clinton." Wander over and take a look; there are some classics.

We lawyers know that these jokes are a sign of your affectionate regard for our profession and that you all know how essential we are to a free society. Or maybe you're just jealous. Either way, we're relaxed.

If you are not able to attend a remembrance service in real life, why not attend the one to be held at the 11th hour of the 11th day of the 11th month (GMT) in Second Life? Congratulations to the Royal British Legion for being up to the technological minute. I am having trouble with the broadband connection at my English house, but will try to be there in the person of my SL Avatar, LastDitch Writer.

The Jean Charles memorial blog round up

For two years, my most unpopular blog posts have been about the summary execution of Jean Charles de Menezes. Many right of centre readers are instinctive supporters of the police. So am I, but this was neither British policing as we know it, nor as we should wish to know it.

The Government's tactics have been brilliantly evil. The CPS refused to bring criminal charges, though the guilt or innocence of any of us who had killed Jean Charles under the same misapprehension would undoubtedly have been decided by a jury and even though - in theory - we are all (including agents of the State) equal before the law.

To provide the appearance of justice, the Metropolitan Police was prosecuted - slowly - under Health & Safety legislation. Neither the killers, their incompetent commanders nor their political masters were at risk. The worst that could happen would be that the taxpayers would pay a fine. They have allowed years to pass without responding to critics under the pretext that the matter was sub judice. Of course this did not stop the propaganda arms of both Government and Met from blackening the dead man's name.

The impending mock trial was also enough to delay publication of the report of the Independent Police Complaints Commission, which came to damning conclusions. Not least - incredibly - the report reveals that the arrogant leader of the Metropolitan Police deliberately impeded the investigation.

Delaying all this until the public had "moved on" was news management worthy of Goebbels himself.

The evidence was truly appalling, worse even than my speculations here over the past two years. The police had dithered, allowing the suspect to use public transport. If they believed he was wearing a bomb belt, they should have stopped him earlier. It seems they put their own "Health & Safety" before that of the public. By the accounts of their own commander, the handling of the situation was confused. She disowned the shooters' actions; claiming she had ordered them NOT to kill.

I defy the men in question to sue me for stating the following; the officers at the scene conspired to perjure themselves in stating that warnings of "Police" or "Armed Police" were given before firing and that de Menezes moved towards them in response. Seventeen witnesses, given no chance to collude, all confirmed he was shot dead without warning. Anyone with experience of criminal trials will tell you that such unanimity is almost unheard of. Policemen who give false evidence under oath are not worthy of our support.

The bullets fired were described in evidence as "special." They certainly were. Soft-nosed dum-dum bullets, so vile as to be illegal in warfare. Seven of them exploded in Jean-Charles' head.  The framing of the picture above says it all. His jacket was raised not to conceal his head, but its absence.

I have not been banging on about this because I hate the police. I don't. They do a tough job. In my time I have made a citizen's arrest and otherwise aided them. I am their instinctive supporter. I have blogged about this repeatedly - and to the displeasure of many readers - because it matters.

From now on, any dissenter can be killed on the say-so of any State agent. All the killer has to say is that s/he suspected the victim was a terrorist. That will be enough, it seems, to satisfy the British public. Please remember that every victim of Nazi or Stalinist terror was alleged by the authorities to be a terrorist, saboteur or otherwise an "enemy of the people". If an allegation, however ill-founded, is enough to still the voice of public opinion we are ready for a police state. On the day Jean Charles was killed and a few lies about him (being an illegal immigrant, jumping a turnstile, wearing "unseasonal" clothes) were enough to bring us onside, a terrible line was crossed.

Our education system has been so thoroughly subverted, that the vast majority of our people are incapable of critical thought. From birth, they have been drenched in the simple notion that private initiative is bad and that State action is good; that the Government is - in effect  - morally superior to its people. It is the only political thought in most of our fellow-citizens' heads.

The blogosphere is similarly infected. Mine has been one of few voices consistently criticising the actions of Government and Police for the horrors of that tragic day. As the evidence has finally come out - through the "trial" and the long-delayed report of the IPCC - other voices have joined in. Here are some links to blog posts in the last week. I commend them to you.

Bang Bang (My baby shot me down)

De Menezes: Why was the firearms team delayed?

What would we say if it were the Russian or Chinese police who acted like this?

de Menezes: Blair as mendacious and deluded as his namesake

Sir Ian Blair has no pride. How can he not resign when the following can be written about him?

If the Beano had a leader column, it, too, would be calling for Sir Ian's sacking, on the grounds that he is a disgrace to his uniform and to the once good name of our police.

If he had the least regard for the officers under his command, he would end their embarrassment by resigning. Sadly, he has never before shown any such regard. I doubt he will now. After all, he needs this job. He is a useless creature entirely unqualified for any other. His only life skill is sucking up to cretinous politicians.

Until (as I hope and plan) I achieve American citizenship one day, this is none of my business. Still, I have to love America for the fact that a real libertarian candidate can not only run for President, but also  raise the third largest campaign fund. Even in the land of the free, the addiction to Mother State's apron strings is so acute, that Ron Paul has little chance. Too many people plan to take money from their fellow-citizens for him to win, but it's encouraging that he is particularly popular with the young. I loved his answer to Leno's question about his prospects;

"There probably is a risk that I could win..."

MET CHIEF REFUSES TO RESIGN AFTER SETTING FIRE TO TRAMP

I am tired of trying to explain the de Menezes case to a heartless nation. The Daily Mash says it all in the linked article, so much better than I can. In doing so, it satirises perfectly the arrogant disregard for life and liberty - and the lack of accountability - that is at the heart of New Labour's Britain.

No-one should have to fire Sir Ian Blair. If he were half a man, he would have resigned long since.

David Aaronovitch was more noted for rhetoric than reasoning when he was a Leftist National Union of Students "hack" in my university days. He was a smug "lefter than thou," faux-prole, sent-down-from Oxbridge,  scruff then. He is a screw-loose political columnist now. Plus ca change.

One of the joys of worshipping at the altar of the Bitch Goddess of Socialism, is that everything is someone else's fault. Or often no-one else's (aka "Society's"). Aaronovitch has been an acolyte for so long that he has lost all ability to think in terms of personal responsibility (except on the part of political opponents).

As he has posed this interesting question however, let me answer it seriously. Who really killed Jean Charles de Menezes? Here is my (possibly incomplete) list:

1. Tony Blair who, as Prime Minister, authorised a policy to order the police to kill people in circumstances where the officers might have no lawful defence to a charge of murder;
2. The Home Secretary who instructed the Metropolitan Police Commissioner to implement that policy;
3. The Metropolitan Police Commissioner who accepted that instruction;
4. The officers who so failed to exercise their personal judgement on the scene that they killed an innocent man under police restraint although he was so clad that he could not concealed a bomb.

We can only speculate as to the state of  mind of the killers as they pulled their triggers. The officer restraining Jean Charles has given evidence that he feared for his own life. I think it's fair to infer that their blood was up. Their commander (with the charming loyalty of the State apparatchik) has given evidence that she ordered them not to kill him. They did it anyway.

Please let's face the facts here. An innocent man was summarily executed in our name in the most brutal way - his head blown off with illegal dum dum bullets - by a squad of our public servants. This was done on the orders of our Government and without the sanction of Parliament. Our "servants" then told us a barrage of lies about the dead man to distract attention from what they had done. These people, God help us, work for us. In a sense, we are all guilty until we rise up against them.

A picture of thousands of words

Late last year I posted a graph of this blog here. The java applet to create these graphs is to be found here. There is something strangely fascinating in watching the graphic form. I am not tecchie enough to understand what the different elements represent and now I am puzzled that, although The Last Ditch now contains hundreds more posts and many hundred more links than it did last year, today's graph appears simpler. Can any tech-minded reader explain why? 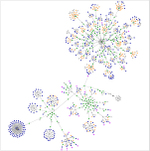 I am so much cooler online

Embedding the official YouTube video of this is forbidden so you will just have to follow the link to enjoy country singer Brad Paisley nailing those of us who are "so much cooler online." If you just want to hear the song, you can just settle for the unauthorised YouTube offering below. I had to smile ruefully that (in addition to the highly realistic avatar who hosted this year's Blogpower Awards ceremony) I have a Second Life "av" who looks rather like Brad Paisley himself. So Mr Paisley has me bang to rights.

If you don't think this song is funny, you should definitely give your online life a break and go join a tennis club or something.

Pigdogfucker » Blog Archive » I have a barrel, I have a tuna, I have an AK47

My badge of honour for the month of October was the linked fisk by Pigdogfucker. It put me in mind of a quotation remembered from the shameful days of my Maoist youth;