I don't buy the sincerity of the town council's quoted regrets. How can they believe an assessment of the risk as serious of a task which has been performed without mishap for 150 years? Sometimes it seems we are not dealing with mere political correctness in Britain, but with the suspension of reason itself. If they are afraid of being sued, I am sure an insurance company will cover them with a flawless one and a half century safety record.

No wonder there are so many swearbloggers. Relaxed as I am after a wonderful holiday, Anglo-Saxon expressions sprang unbidden to my mind as I read the linked story. As did the memory of a young gardener at our hotel in Lyon last week, balanced at the top of a huge step ladder. He was wielding a huge and scary electrical lance to trim tall topiary alongside a steep drop to the street below. He was adult, careful and expert. He did a great job and moved on, all unconcerned. We can't blame Europe for infantilising our culture this time. We have only ourselves to blame. 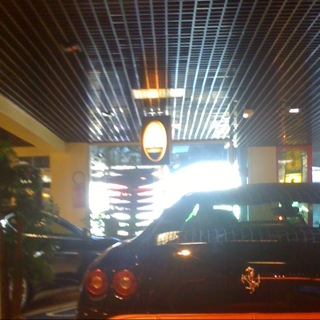 Ah the joys of touring. The view is from my seat in the Maserati dealership in Cannes. Vittoria is in the rudest mechanical health but her inboard computers seem a tad confused. They report scary but non-existent faults, demand to be taken to dealers, shut down the cruise control randomly and have decided to make the brake lights permanent. This last fault means we can't wait until our return to fix the problem, so here I am.

All problems, however trivial, provide insights into human nature. Many kind people pointed out my problem as I drove along. French hand gestures are remarkably expressive and some came quite close to communicating "your brake lights are permanently illuminated, Monsieur." No owners of performance cars (a near-majority in these well-heeled parts) troubled however. The smaller and humbler the vehicle, the keener the driver seems to be to help. Some admittedly seem to have some schadenfreude about a car costing 10 times more than their own malfunctioning. Most however are just being nice. I do not believe in class differences when it comes to ethics, politeness or decency so I am quietly pondering why this should be. Any theories?

The Sith fall to the blogging Jedi

The Smith Institute is a scam. It purports to be a charity in order to defraud the Treasury. The Treasury has cooperated because the fraud was for the political benefit of the then Chancellor, now Prime Minister. Resignations and apologies are really not sufficient. If any of us had faked a charity to avoid taxes, we would face jail. The worst thing about New Labour has been that it has validated the old working class belief that "there is one law for them and one for us." I grew up hearing that, but I never believed it was true until Blair and Brown made it so.

Guido Fawkes did excellent work in exposing all of this. He is a the kind of a citizen every government fears and every democracy needs. The Charity Commission would never have investigated without him. So what is it with Britain's mainstream media that they cannot bring themselves to mention him in reporting on this? Perhaps it is because they know they failed in their duty to identify and report such abuses of power? And now they abuse their power to conceal their own embarrassment?

To hell with them and their vanity. Well done, Guido. You may be crap on television, but you are an inspiration in pixellated print. 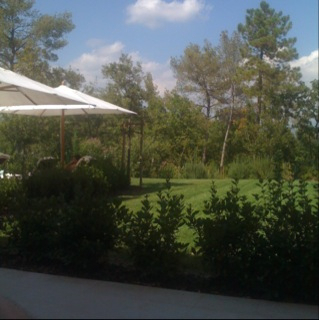 This post was a test of the Typepad gizmo for iPhone. It worked rather too well in that the photo  I snapped (of the view from poolside at our resort hotel's spa)was posted before I realised and before I could add some text! By way of explanation "Idle time" is how my law firm's time recording software categorises my hours today (apart from the three of them I spent dealing with emails before breakfast). "Idyll time" was more like it, I thought. The second photo is of our view as we walked "home" to get ready for dinner. 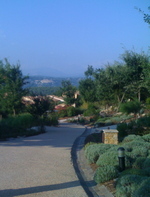 Of Lyon, her most famous son and of excellence in general

We have hurtled through Lyon on our previous trips to the Côte d'Azur but this year we decided to take a couple of days to look around. It's a beautiful city, straddling the rivers Saône and Rhône. It's the third largest in France with a population of 1.78 million. It is the culinary capital of France (and therefore the world) and home to her most famous living chef. This is a pioneer of Nouvelle Cuisine who has held his Michelin stars (currently three) for a staggering 42 consecutive years. Paul Bocuse's genius has - as he claims modestly on his menus - elevated chefs in general from "lackeys" to potential stars. It has also won him membership of the Legion d'honneur.

Last night, Mrs P. and I were lucky enough to dine at his home restaurant, l'Auberge du Pont de Collonges. At the suggestion of our hotel's manager, we hired a motor yacht for an hour to take us there down the Saône. This was a brilliant idea as we had a splendid view of the city en route, and also arrived much cooler than we would in a taxi. The picture of Bocuse with "our" yacht at his pier is from the yacht company's website - the others (click to enlarge) are my own from yesterday.

Mâitre Bocuse's art did not disappoint. Of course, at 82, he is as constrained as an old rocker who must play his hits or disappoint his fans. For a creative genius who won his fame by innovation, it must be hard to cater to those who want to experience the dishes they have read about (and who then must often, as we did, notice that what was revolutionary in 1975 is a little passé now). We were surprised to see many Japanese guests an learned that this was because Bocuse introduced French gastronomy to that country in partnership with his late friend, a renowned Japanese chef.

It was a great experience and as we worked our way chattily through the menu de dégustation in the charming surroundings of L'Auberge - sipping at a delicious Puligny Montrachet - we were quietly conscious of how lucky we are to experience the best of this life. At such moments it is my habit to raise my glass silently to the many ordinary young people, just like Mrs P. and I were, who - thanks to Labour's systematic destruction of British education system - will never have the chance to appreciate the good life, or even to know it is there.

It is a scandal that today's Britons are not more, but less, socially-mobile than they were in our day (when mobility was declining from its peak in the grammar school era). It is a scandal that Mrs Thatcher's Cabinet was more classless than Gordon Brown's. It is a scandal that so many will live their lives unfulfilled, with a vague sense that "there must be something more." There is, guys, there is. The squalid life of the Labour heartlands is not, by any means, "it". Out there, if you will lift your eyes, there is beauty, truth and excellence in all fields of endeavour - whether literature, science, engineering or gastronomy. Paul Bocuse is a rich man who has lived a charmed life, but to the French he is a source of pride. They are right to feel that way. Whether you strive for it yourself, or learn to appreciate it in others, excellence is not to be despised, but embraced. Every man's achievement takes humanity forward and should be a source of pride, not envy, for us all.

The results are in and, despite having myself voted for Tim Worstall, The Last Ditch has been chosen by Witanagemot Club voters as the "Best ex-pat Blog". I am also chuffed to have come third in the "Best Libertarian Blog" category, behind the redoubtable Devil's Kitchen and Guido Fawkes.

My sincere thanks to all who voted for me and my congratulations to all those who won or were placed (except perhaps for the winner of the "Shouldn't be allowed to own a computer, let alone have a blog" category).

My commiserations to Iain Dale. To be ranked higher in the "Blogger most likely to vote for a donkey if you slapped the correct colour rosette on it" category than political blockhead Neil Harding seems unfair. As does his being voted "Blogger most desperate to win blogging awards."

Predictably, Iain was most delighted by taking third place (jointly with Devil's Kitchen as the highest-ranking males) in the category of "Blogger you would most like to shag." Oo-err.

Vittoria comfortably knocked two hours off our previous North of England to Champagne record. In fairness to the late, great Claudia this could partly be attributed to the fact that we set off at 3am and were therefore around the M25 and in Kent before Londoners stirred. We caught the Eurotunnel train one hour before our scheduled time and arrived in Épernay in time for lunch yesterday.

This morning our voiturier told us that all France's speed cameras are being activated today - and that the traffic police would be out in helicopters for a major speeding crackdown. I thought this an excessive reaction to my driving yesterday, but apparently Vittoria and I had nothing to do with it. Today is a big one for holiday traffic in France and the police have decided to make a special effort. Thus warned, I tried (as far as possible) to hold back Vittoria's horses and more or less keep to 130kph. She was good natured about it, even though it compelled her to hang out with Belgian MPV-drivers who inexplicably block their vehicles' windows with all their worldly goods. One wonders what they are up to in there.

Despite this unaccustomed restraint, we made today's run in four exhilarating hours, with the sunshine steadily becoming brighter and the temperature steadily rising. Mrs Paine monitored by SMS the progress of the Misses Paine in Romania and the Philippines respectively. Miss Paine the elder is camping on a Black Sea beach tonight, there being no free hotel rooms. Miss Paine the younger is staying in a Manila hotel at the expense of a Philippines airline, her onward flight having been cancelled. Both seem, from their whimsical text messages, to be in good spirits, but their mother is worrying (and to be honest, so is their father).

Right now, we middle-aged worry-worts are sitting on the terrace of our hotel room looking out over Vieux Lyon. Here's a picture (click to enlarge) of our  view. I am suffering slightly (Mrs P. thinks I understate the case) from over-indulgence. I hope to recover quietly over a glass of Badôit in time to do justice to tonight's feast. Those who know consider Lyon's cuisine to be superior to that of Paris.  My own limited previous experience (on an occasion when I was a guest and not fully in control of the situation) gives cause for hope.