Next Saturday, April 3rd, is the opening party for the first ART UNBOUND pop up exhibition – Mirages on the Mother Road.

The party will run from 6pm to 10pm SLT. Our partner Infinite Productions has lined up a great programme of music so come along and dance the evening away in the desert surrounded by art.

There's no dress code, but biker chic or Breaking Bad might be the way to go! It's an art event in the Great American West, so feel free to use your imagination.

If you haven't received an invitation by the usual channels just IM Dave, Fen or Cate Infinity. The show runs from April 3rd to the 23rd but is open for previews now.

By the way, if you hold a Bellisserian passport, there's a stamp terminal at the pop up location. It will only be in place for three weeks so don't miss it! We will have a terminal at each ART UNBOUND pop up show, so you can collect a series of these limited edition stamps.

When each show is officially open, we'll also hand out (NO COPY/TRANSFER) postcards from it for you to collect and trade. 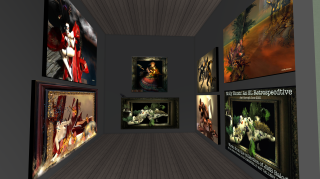 We continue our series of retrospectives of work by artists no longer active in SL. From April 1st to June 30th we are exhibiting a selection of works by Molly Bloom (mollybloom100) in the Jishnu Room at the Main Galley in Sirinial. All the featured artworks are on loan from the collection of JMB Balogh. Thank you, Jo for sharing them with us.

Molly is an American RL artist, brought up as "a Navy Brat" and living in Japan with her family when she was very young. In RL she had "a fairly high-powered corporate career",  worked as a Holistic Health Educator and was also "an award-winning glass artist".  She was  active on the SL art scene for many years, with her own gallery at Angelic Isles. She had shows at The Rose Theatre and Gallery, the Paris Metro Gallery and elsewhere. The last of her projects promoted in SL was actually on OpenSim in 2016 and it may be that's where she has now gone. There are no more recent images than 2016 on  her Flickr Page.

In an interview with Jami Mills of Rez Magazine in December 2013, she said

Living in the US, we are still under a vast Puritan ethic and my art rebels against social conventions. The beauty of being an artist is that you can easily substantiate rebellion against current paradigms... Laughter, sex and deep thought are by far the healthiest activities we have as humans. Every time we participate, it allows for a richer life. Sex and laughter together is a double whammy of endorphin rush.

In a 2015 interview, again with Jami Mills, she asked (on the subject of SL itself);

Why on earth would you come in here to be beige when you can be all the colors of fantasy?

That attitude is reflected in Molly's work, which is bold, sexy and witty. Her SL profile says "Maturity is highly overrated, especially in SL". She certainly seems to have had a lot of fun here, while enhancing others' lives with exuberant creativity. We regret that we don't have any of her artworks in our permanent collection but hope you enjoy this chance to look back at her SL career.

Chuck Clip's Janus Gallery is one of our favourites. Chuck has dedicated a newly-acquired piece by artist Sharni Azalee as a memorial in SL. He writes;

Whether you have lost someone recently or years ago, to cancer, heart attack, illness, hilariously ironic accident, or any other reason, and wish them to be memorialized, simply submit their name to me via a notecard placed in the drop box just outside the memorial. I will place a candle with that name in hover text above the candle. There is no fee, no requirement other than telling me what name you wish to be displayed.

It's a typically kind, generous gesture by Chuck. Dave visited to enter the name of his late wife who died of cancer in 2011. Why not go there and apply for a memorial to someone you loved, taking in the art while you are there?

On the 9th floor of the LG Tower you will find Ordinary Angels #3, by Awesome Fallen. We bought it from her superb exhibition of the same name, currently showing at the Dixmix Gallery. Fenella is pictured here chatting with art blogger Frank Atisso at the show. Even with his advice, it was hard to choose just one piece from such an engaging, thought-provoking show to represent both the show and Awesome in our collection.

You should hurry over there soonest to see all the works we regretted not purchasing before it closes!

On the Top Deck of the AS Limoncello, Traci Ultsch features both as artist and model. Three of her art works are also to be found on the Fourth Floor of the LG Tower. She was recently interviewed by Frank Atisso over at Art Korner, the SL art blog he publishes with Praesto Ibsen. Ostensibly the interview is about her current exhibition at Nitroglobus Gallery, but it goes more deeply into her background and process that we usually have space for here so please take a look!

PROGRESS ON THE NEW AIRSHIP

Our mesh expert has finished other tasks he was working on and has begun the Airship Limoncello rebuild. We'll keep you informed of progress.

The RL Photo Festival 2021 opens on March 30th at midnight SLT. The opening reception is on March 31st at 1 pm SLT. Fenella has entered five portraits this year so had access in advance. We can tell you that (modestly excluding Fenella's own humble efforts) there is some excellent work to be seen and enjoyed. The Festival is organised by Nils Urqhart of  at the Helvellyn Gallery and is well worth your time for a visit. By way of a teaser, if not a spoiler, here is Fen with her photos.