We were delighted to discover Cranston Yordstom's new blog, where he writes about his experiences collecting visa stamps for his Bellisserian Passport. Especially so as his very first stop was our recent ART UNBOUND popup gallery co-produced with Infinity Productions – Mirages on the Mother Road.

The blog is called Passport to Bellisseria – Cranston Travels the Grid and his write-up of MOMR is here. Please take a look and leave the nice man an encouraging comment! If you'd like to read more about him, there's a BBB Gazette post that includes an interview here.

Speaking of the Bellisseria Passport, the BBB terminal is now in place at our new office in Carmel Art Community. Don't forget to collect the stamp when you visit.

We would love to hear what you think about the new system for handing out information cards about the exhibits at our Main Gallery in Bellisseria and aboard the Airship Limoncello in Nanga. Before we embark on the big job of installing the system in the LG Tower, it would be great to have some reassurance from our patrons and exhibited artists that it works well for you. It certainly saves us prims we can use to buy more art, but we don't want that to be at the expense of your enjoyment of the collections.

Please leave a comment or IM Fenella Allen in world. Thanks in advance for your feedback. One of our favourite artists in SL is BambooBarnes. We have several of her works in the Limoncello Gallery collection. You can find her So Long on the top deck of the Airship Limoncello, for example. Her Fairy Glitch features in the Dragonash collection on the 1st Floor of the LG Tower and her Life is on the 5th Floor.

See New Acquisitions below for news of the latest addition from her oeuvre!

Bamboo has an excellent show in progress at the DixMix Gallery called Marginal Mannerisms. Have a look at Violet Boa's interview with the artist at her excellent Virtuality blog, from which I will just quote Bamboo as saying;

The artworks in this exhibit are about my emotions which aren’t clear to see. I hope that you will see something in them for you. Life goes on.

So it does – with Bamboo, enigmatic as ever, letting her art speak for itself. 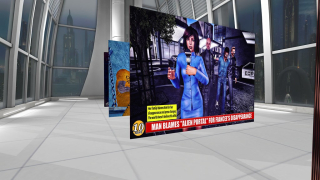 Fenella was lucky enough to be at the opening party for Exal Grut's new exhibition at the Kondor Art Center and had a wonderful time.

The show is unusual because Exal, inspired by comic book art of the 70's and 80's, has used Second Life® to stage and photograph a story of his new superhero - Hatari. It's a fun idea, well-executed and an inspired use of SL. Our grid is – when you think about it – perfect for staging comic book stories! Indeed many of our avatars bear about as much relation to reality as Thor's muscles or Batman's endurance.

Go take a look. We think you'll enjoy it. It certainly made a refreshing change. Some SL art exhibitions tend to a pomposity ill-excused (if pomposity can every be excused) by the quality of the art on show. Not this one! 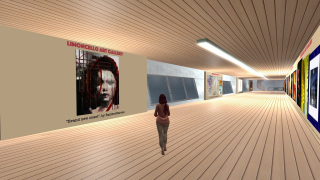 We bought Brand New Closet by BambooBarnes from her current show at the DixMix Gallery, reviewed above. It now hangs on the Middle Deck of the Airship Limoncello.

We bought Meeting the Team by Exal Grut from his comic book art show reviewed above. It's an enormous piece, with no mod rights and no resize script. We've opened the 11th Floor of the LG Tower, which has the ceiling height to accommodate it, and where, it hangs – for now – in splendid isolation.

Finally this week, we bought Love Me Not, by Gitu Aura from her current show at the Artcare Gallery. It now hangs on the 6th Floor of the LG Tower.

It is my honor, thank you very much for your support Limoncello Art Gallery!

You are most welcome Bamboo, I love your work.