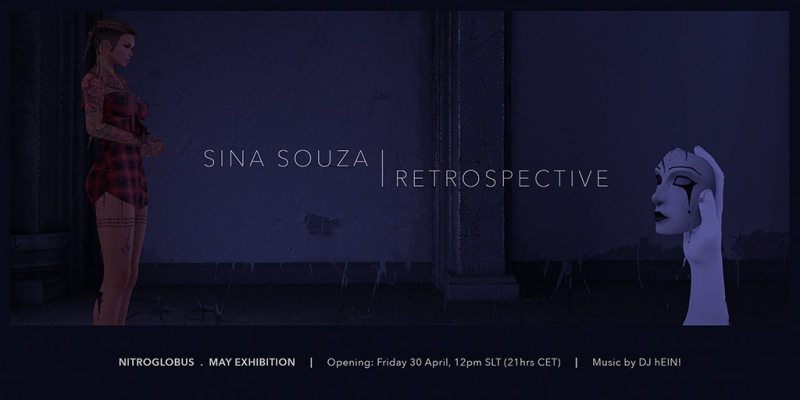 When Dido Haas of Nitroglobus told us the news that Sina Souza was back in SL and making new works, we were very excited. This is an Elsewhere piece that can't wait for next week's edition.

Sina is an artist who was in everyone's SL collections back in the day. We have several of her pieces at the Limoncello Gallery; Remember Me and Masquerade are on the Upper Deck of the Airship Limoncello and Desire for Humanity features in the Balogh Collection at the LG Tower. Dido's as excited as we are. She says;

When Sina contacted me a few months ago and told me her inspiration was back and she'd started creating again, I was really thrilled. I love Sina and her art and I think I don't only speak for myself when I say I missed Sina's creations over the past years.

She doesn't only speak for herself. We've missed Sina too! Dido has cleared her own part of Nitroglobus Gallery to make room for Sina's new images and a sculpture she has made. The exhibition is called Retrospective and opens this Friday, 30th April. Despite the title, Sina says;

Retrospective is not an exhibition where I want to show you my previous work. It is an exhibition about struggles in my past, wrong decisions that I have made
or experiences that I have gained. It is a path between depression, strokes of fate and the problem of trusting others. But it's not just a look back at what's behind me, it is also a kind of self reflection, a step forward, a way to learn from mistakes and to grow from experiences. Sometimes we need to look back to look ahead.

We are happy to be able to break this exciting news here at the Limoncello News. The exhibition will run for the whole of May and June. Don't miss it! The opening party is this Friday, 30th April at 12pm SLT (9pm CET).

Thanks Fenella for posting in Limoncello News! Appreciate ❤️

It’s a delight to be able to help you and Sina, Dido. Congratulations on the curatorial coup!

Thank you for the Blogpost and the kind Words :)

Not at all Sina. SL is made by its creatives and muggles like me must be grateful to you all. The artists of SL, in particular, make SL special for me. I can't make art myself, but if I can help those who do, I will.

I have been enjoying your works in my collection for years and wondering where you'd gone. From your exhibition (which I love) it seems you've had some difficult times. I am genuinely happy you are back – and that you have made art from your troubles. I hope it was as therapeutic for you as it is thought-provoking to me.

Anyway, welcome home to SL. I bought "strokes of fate" to add to our collection.

Frank Atisso has done an excellent review of the exhibition here - https://artkornersl.com/2021/04/29/retrospective-return-sina-souza/ His Art Korner blog is in our “SL Art Links” list in the sidebar.