Edition 17
A message from our Founder, Tom 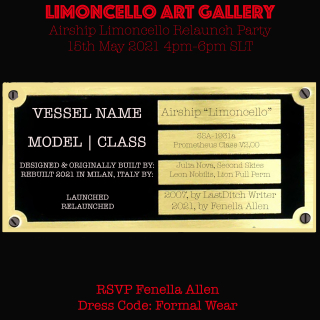 Please have your tuxedos and evening dresses dry-cleaned and come to the relaunch party of the newly-refurbished Airship Limoncello from 4-6pm on Saturday May 15th.

The party will be on board the newly spiffed-up ship and live music will be provided by singer Cranston Yordstorm from 4pm, followed by tunes from DJ Female from 5pm.

It will be an emotional event for the Limoncello Art Gallery team. The first party our founder, Tom Paine (LastDitch Writer) ever threw in SL was an after-party on July 1st, 2007 for a blogging awards ceremony. As reported here on his blog, it took place aboard the then brand-new Airship Limoncello. At 124 metres of more than 700 barely-held-together prims – she was then the largest moving vehicle in SL – though the gentlest region crossing tended to pull her apart!

Many noobs partied aboard that night. Several fell out and had to be saved by teleports back from mid-air! The dear old Limoncello has been central to our Second Lives ever since. Tom will be there in spirit for the relaunch of his old ship and we will release a special video greeting from him at the time of the event.

So, if you want to see nostalgic tears in the eyes of grown avatars, you need to be there. Bring your dancing shoes and your friends. The Airship Limoncello having been rebuilt to save prims, our logical next step was to use some of them (163 in fact) to add floors to the LG Tower. So that's what we have done.

Since last week's Limoncello News, we have called in the builders and added five new floors. That gives us 20 in total, of which 19 are gallery floors. We can now sustain the present pace of acquisitions for a year without increasing tier.

The new 20th Floor is our LG Arts Theatre and is available (complete with stage, podium and lighting rig) to any artists or curators who would like to give lectures, stage performance art or present other arty events. There will be no charge for use of the theatre by anyone Dave likes. Take the elevator to the 20th Floor, check it out and lay your charm thickly on Dave to get the tag!

PASSPORT TO BELLISSERIA VISITS THE RELAUNCHED AS LIMONCELLO

Cranston Yordstorm’s excellent blog Passport to Bellisseria has been documenting his visits to stamp-issuing locations for the Bellisseria passport from the BBB. Last week he was one of the very first visitors to the newly-refurbished and re-launched Airship Limoncello and you can read all about it here. It’s funny for us, having lived with the old girl for the whole of our time in SL, to read about her as the “latest annex” and “new”, but in a sense she now is. We are grateful to Cranston for letting us know that the passport terminal on board was malfunctioning. We’re not sure how that happened but we deleted it and rezzed a new one and all is now well. Please, if you ever encounter anything that's not working at our galleries, let us know!

ELSWHERE ON THE ARTY GRID

Fenella attended the opening of White Canvas, an exhibition by Diconay Boa at Nitroglobus Roof Gallery last Sunday. The images were striking and the light show by Venus Adored was spectacular. The show is a study of second life tattoos.  Diconay says that;

Tattoos are jewelry for the skin. People get them for many reasons... Our current society craves individuality and self expression. And now many people wear their artistic expression. They are especially interesting in the virtual world because of the lack of permanence on a virtual mesh body. But someone talented in the digital arts can really make it look surreal and beautiful.

The show is well worth a look.

We mentioned Aruba DeCuir's World Collage Day exhibition last week. It's still running for a little while so do visit if you haven't already. We bought two pieces for our collection, called Red Herring and Chopsticks – both by Aruba herself. You will find them on the Upper Deck of the Airship Limoncello.

We also acquired three works by Ghost, who is organising a charity event at her gallery in the Artists' Village at Campbell Coast. All the art is on sale at $L0 – that's right; entirely free of charge. Instead purchasers are asked to donate the usual price of L$250 per item to Relay for Life (RFL) the fundraiser for cancer research. Our three "purchases" are Vanity Blues - Biography, Urban Dystophia and Sunstruck Stone and also now hang on the Upper Deck of the Airship Limoncello.

Finally, from her exhibition White Canvas reviewed in this week's EOTAG feature,  we bought 13. Slow kill, by Diconay Boa. You'll find it exhibited on the 11th Floor at the LG Tower.

That's all from our Campbell Coast editorial offices for now. See you at the party. Until then, Limoncello Friends, stay arty!

Thanks so much Fenella for this cool video you made last Sunday when visiting the opening party of Diconay Boa's exhibtion 'White Canvas' and placed in your weekly Newsletter! Appreciate A LOT!
dikke kus
Dido

Thanks for inviting me to the party Dido! It was great, And congratulations on yet another great exhibition.