A message from our Founder, Tom
Edition 20

First of all, thank you to Cranston Yordstorm of the Passport to Bellisseria blog (and now vlog) for his kind permission to use his photo of the relaunched Airship Limoncello as the new banner for Limoncello News. Cranston is an actor in RL and an affable, enthusiastic presence in SL. Thanks, Cranston, not only for the photo rights, but for all you bring to SL.

Not least of Cranston's SL contributions is his singing and those of you who attended the Relaunch Party last Saturday for the Airship Limoncello will be well aware of his talent. He entertained us well and the party then continued under the expert musical guidance of DJ Female. Our thanks to them both and to all of you who joined what was a sentimental evening for us. The airship has been part of our Second Lives since the very beginning.

It was particularly good to welcome JMB Balogh and Zhu Juran. Both were at the first airship party back in 2007 and are great friends. We're happy that, despite the unsocial hour for Europeans, Leon Nobilis, who remade the ship for us, joined the celebrations. It was also great to welcome some of the artists whose work is represented in our collection to celebrate with us. Their creativity keeps us in SL. Without them, we wouldn’t have stuck around for the virtual experiences (and real friendships) that make our SL so enjoyable — and so unlike the seedy 3D chat room outsiders often imagine.

The party’s over but it’s not time to call it a day. It’s back — for the Limoncello and for us — to the quiet, satisfying pastime  of collecting and sharing art. We’re grateful to all of you involved in helping us make SL places to – we hope – bring pleasure to visitors. 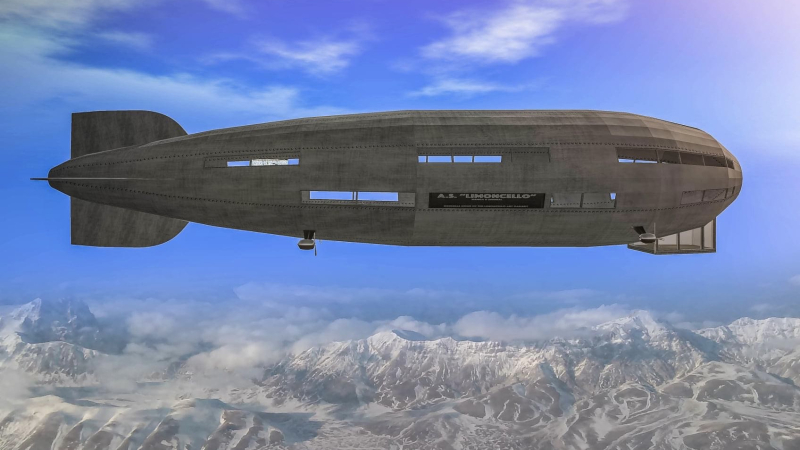 Discussions have begun with our partner Infinite Productions about the next pop up art gallery in our ART UNBOUND series. As you know, the big idea of the project is to take art out of its "temples" to places it might not usually be thought to belong. Cate of Infinite Productions is researching locations and there'll be more news soon. We can tell you that the next ART UNBOUND pop up gallery will open in July and will feature works by veteran SL artists as well as one newcomer. 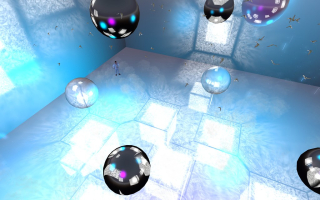 We love the enormous installations made by French Artist Eylinea Seabird. One called In My Mood has been in place for some time at our gallery and can be accessed from a door at the aft end of the Middle Deck of the Airship Limoncello. You should check it out soon if you haven't seen it already, or take a last chance to enjoy it again as it may soon be replaced. Don't forget to check out her 2D artworks in our collection, which you will walk past on the way to that door.

Eyelinea's latest massive installation, Under the Ice, opened this week at the VeGeTaL PLaNeT Gallery and is cool in every sense. Provided, that is, you first turn on Advanced Lighting Model (ALM). Without ALM, you'll think we're crazy to recommend it!

Sadly she couldn't make its opening party, but Fenella visited the new Jamison Arts Gallery in Haven Village to check out the three-woman exhibition with which it was launched. Two of the three artists; Aruba DeCuir and Jaelle Faerye, feature in our collections. The third, Sabrina Cooke, was new to us. Their work plays well off each other. Their styles are all different but somehow work together as a show. We recommend you take a look.

We're always delighted to see new art spaces open. If this opening exhibition is anything to go by, the Jamison should be a great addition to the SL art scene. Our congratulations to Harlow Jamison, the friendly and welcoming owner, and to the three artists concerned. 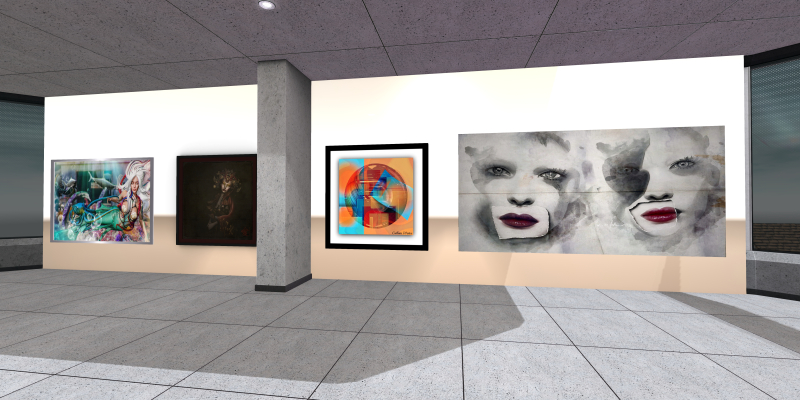 This week's additions to our collection include "She Dwells", By Sugah Pancake – another Mermaid image, and a spectacular one. It was bought from The Art of Sugah Pancake, an exhibition currently in progress at the new Kondor Art Square. The next addition is by the highly-productive Caly Applewhywte and is called GEISHA in the Soul - 04.  Then comes CW- Girando, by Cullum Writer and finally Intro and extrovert, by Awesome Fallen. All of the above are to be found on the third floor of the LG Tower at our mainland annexe in Nanga.

At the opening exhibition at the Jamison Arts Gallery in Haven Village, mentioned above, we also acquired two portraits by artist Sabrina Cooke, for whom that is her first SL show. They are called Tulips and Begonias and Ethereal and are to be found on the 11th Floor of the LG Tower.