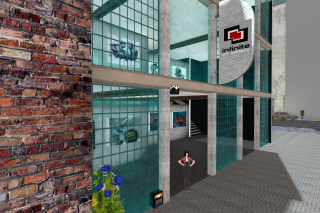 We are happy to announce that one of "our" artists, our friend and our partner in the ART UNBOUND project – Cate Infinity – has opened her very own gallery in the Soho Contemporary Arts Center in Virtual Soho.

It's called the Infinite Art Gallery and features Cate's own work and that of Esta Republic, Poppy Morris and Manx Wharton. We congratulate Cate, Esta, Poppy and Manx and wish them every success.

We hope you'll visit to take a look and also check out the excellent website.

In other exciting news, one of our favourite artists (we have several of her works in our collection) has offered to put on a special exhibition.  We just love Xia Chieng's extraordinary portraits. The faces looking out at you are beautiful, enigmatic and gaze-arresting. You're drawn into their imagined thoughts until you're in a kind of conversation with them – or perhaps with the artist herself.

Xia thanked Dave for buying our latest piece from her gallery and, saying how much he loves her work, he joked he has to avoid visiting too often for fear it would dominate our collections. The idea for this exhibition was her response. It is planned to run from 1st October to 30th November, 2021.

Our Autumn programme is beginning to emerge. We are also discussing new shows with two other artists featured in our collections, so expect more announcements soon. If this seems a long way in the future, that's because we are taking a Summer break from new special exhibitions. We will resume in September with an exhibition of all-new works the artist has been working on for months. More details to follow! In the meantime, the Molly Bloom retrospective continues at the Main Gallery in Sirinial and Eylinea Seabird's amazing installation is still to be enjoyed in Nanga (SLURLs in the sidebar).

Our exhibition Abstracts by Kisma Reidling ended on May 31st. We are grateful to Kisma, who is an artist much in demand, for exhibiting with us. Her work is always thought-provoking, so watch out for her other exhibitions. Currently, she has a show called Solera at the Hidden Door Gallery, for example. It's well worth a visit!

Virtual Community Radio produces a bi-weekly short feature called Where've You Been?  that highlights fun places to visit on the SL grid. The episode that begins airing today – June 9th – features our beloved historic home, the Airship Limoncello. It will play just after noon and again at 4pm SLT and again in the same two slots on June 12th, 16th, and 19th – a total of 8 broadcasts. After that it will move to the station's MixCloud page for Play on Demand.

At the time of writing, we haven't heard it ourselves but we're always happy when someone enjoys our gallery. We look forward to hearing what hosts Elrik Merlin (of Designing Worlds) and Caledonia Skytower (of the Seanchai Library) have to say about their visit. 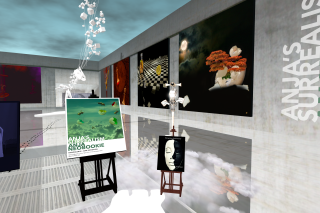 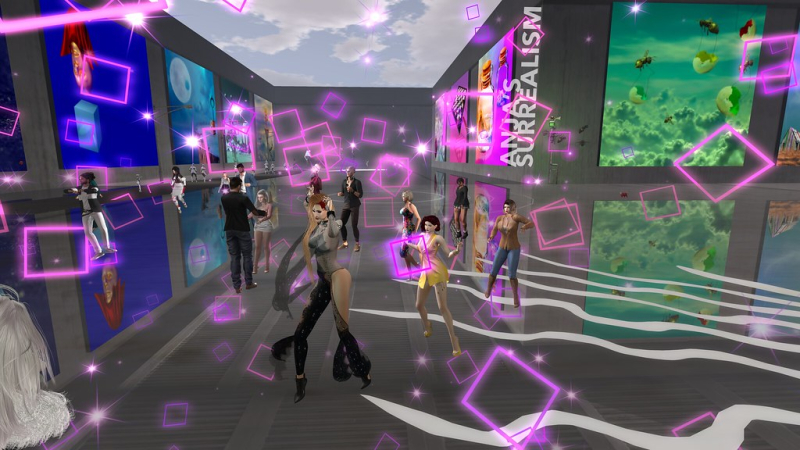 Fenella attended last Saturday's excellent, well-attended opening party for our good friend Anja's (Neobookie's) exhibition at Nitroglobus Roof Gallery. The show is called Anja's Surrealism and does exactly what it says on the tin – with creativity, skill and wit.

Anja is a relative newcomer to SL art. She worked for a while under the guidance of her mentor, Traci Ultsch. There's no question she has found her own distinctive artistic "voice" and makes great work. Inara Pey reviews the show here.

Inside Anja's mind is a fascinating, imaginative place and she's adept at sharing it through her art. She has been working on this show for a long time. Fenella has had secret previews of the work in progress and has been bursting with pride at her friend's achievements and struggling not to blurt out the secret. She is delighted finally to be able to say; "I love Anja and I love her art. It's a great show. Go! Go now!!"

La Maison d'Aneli, is always a good place to visit but this month we'd say it's even more so than usual. Fenella stumbled in on vroum Short's exhibit there while it was still under construction and it was already impressive. We can't wait to see the finished version. It doesn't open officially until 23rd June, but should be available for previews by 18th June.

In the meantime, there are several other artists exhibited. Aneli has run her gallery for 12 years. We Limoncellisti have been regular visitors since the beginning. She makes her spaces for SL's artists "only for passion – just for the pleasure of eyes" and for her own enjoyment of "the torture of little prims" to make her various builds. She told Fenella

I like all the artists, they do incredible work and they show a part of themselves

Unlike our gallery, which is a permanent collection with some loan exhibits and occasional special exhibitions, La Maison d'Aneli stages a constant series of ever-changing multiple art shows. That's much more work than we would ever like to handle! Aneli, who does it all herself, has our respect and admiration for the effort she puts in. Her work in curating so many exhibitions over the years means that she now knows many (if not most) of the serious artists active in SL and (though too modest ever to say so) is something of an SLebrity herself. We recommend you go take a look.

This week we acquired 10 by paola Mills, Box by Esta Republic and Bumble Deliveroo, the signature piece from Anja's (neobookie's) current exhibition (see above). All three now hang on the 5th Floor of the LG Tower.