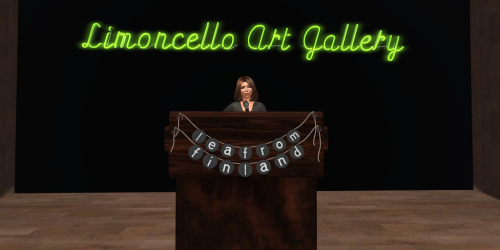 We were delighted with the success of our first live poetry readings by LeafromFinland last weekend. For the reading timed for American audiences, Fenella stayed up until 7pm SLT on Friday (3am London time on Saturday) to host the event, introduce Lea and help the audience with any technical problems. In fact, all went smoothly. The timing was even worse for Lea herself in Helsinki! The second reading was timed to suit European audiences so was in a more civilised 0900 SLT slot on Sunday.

SL Voice worked perfectly both times. Lea – who, as a relative SL newbie, had been quite nervous – seemed to enjoy the experience almost as much as her audience.

It was our first event at the Limoncello Arts Theatre, which we think worked well for the purpose. We hope to feature more SL Voice events in future and are open to suggestions for other presentations, lectures or performance art events that could be staged.

Lea's exhibition – His White Room – continues until 17th June. There are no more live readings but the poems are available by clicking on the display panels around the theatre. When you've read them, you'll feel you know her brother well and will be relieved to learn (as Fenella found during Q&A) that though the poems are in the past tense, he is alive and well. We imagine he's also fairly bemused at now being known in a virtual world he's never visited!

ELSEWHERE ON THE ARTY GRID / ARTIST IN FOCUS 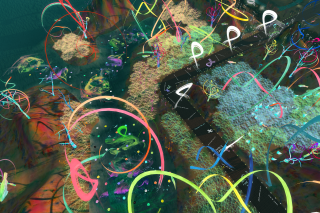 If, like us, you love the work of Fiona Fei, Relay For Life 2021 had a treat in store for you; a whole region designed by her along the relay route. It will be gone by the time you read this, so if you missed it we can only give you a very sketchy idea with this aerial photograph. It was colourful, surreal and – while unlike her other works in many ways – recognisably hers.

We have three of Fiona's works in our collections. Window Light, in the main gallery, is a photograph she made inside one of her art installations. On the Upper Deck of the Airship Limoncello, we have Painting Scroll - Cranes and Chinese 3D Painting - Flowers 02.

The Dragonash Collection on the 1st Floor of the LG Tower features (on loan from its owner, Owl Dragonash) FionaFei Frames Collection (Mother's Day Gift). 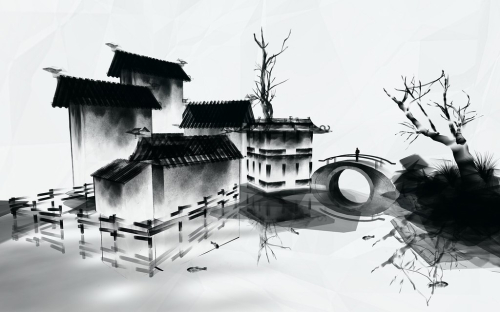 Fiona's website is well worth a visit, as is her Flickr photo stream, where you will currently find much better pictures of her RfL build than ours! There's also an excellent video interview at Art Made in SL here.

In many ways, Fiona's art is in an ancient tradition. However she uses Second Life brilliantly to make it come alive so that, as at her Shui Mo gallery (one of our favourite places in SL) you can walk into and become part of the scene.

We promise you won't regret any time you spend getting to know her work.