Fenella has been working on the BBB stand at SL18B this week so has not had much time for work on our own gallery or visiting other gallery's exhibitions.  This edition is a bit light in consequence. 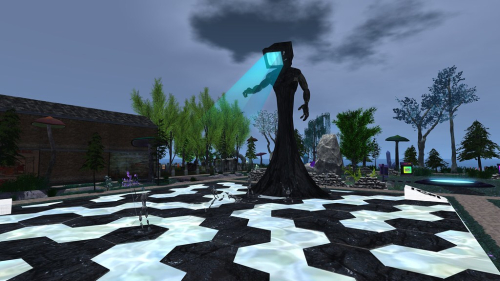 Chuck's first sculpture in a while

There are some good art installations at SL18B and you might like to read Frank Atisso's review of one of Chuck Clip's two SL18B stands, for example. Dave visited it and congratulated Chuck (of Janus Gallery fame) directly for his work in depicting the history of SL art in selected sculptures and images. On his other stand, Chuck has gone back to his own roots as a prim sculptor, building a huge installation – his first new sculpture for quite some time. 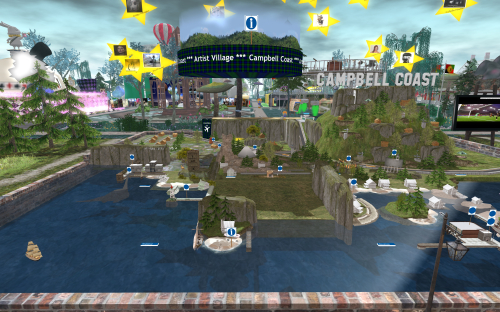 SL18B is a huge event. The shopping alone could take days to explore, but the exhibits from SL's own residents and communities are the best part for us. As tenants at Campbell Coast, where the offices of Limoncello News are based, we really enjoyed visiting the amazing stand that Kitty has built. She has essentially recreated all the Campbell Coast regions (including the Artists Village in a sky box) in a miniature model! Dave frowned a little that she depicted his Ferrari with a miniature VW Beetle, but as we pointed out out to him, she did at least paint it the right colour! Well worth a visit. 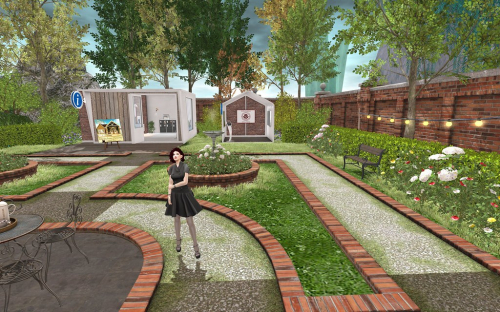 Fenella at the BBB exhibit at SL18B

If the whole thing becomes too overwhelming – and it is a bit much at times – we recommend you stop by the Bellisseria Bureau of Bureaucracy stand. You go along a dirt path from the entrance, through a hollow tree tunnel into the "hidden world" (the theme of this year's SLB) of a carefully tended Manor House style garden. It's a peaceful oasis in the bustle of SL's biggest annual event and there are outdoor tables, chairs and beverages! Those guys really don't know how to be bureaucrats! They are far too stylish, welcoming and efficient!

We bought a painting called Island Girl from an artist new to us; Mia Kidd whom Fenella met through her friend Barbie – Mia's sister. Her "secret" gallery is at their family's island where their father runs a music club. The painting can now be found on the 8th Floor of the LG Tower.