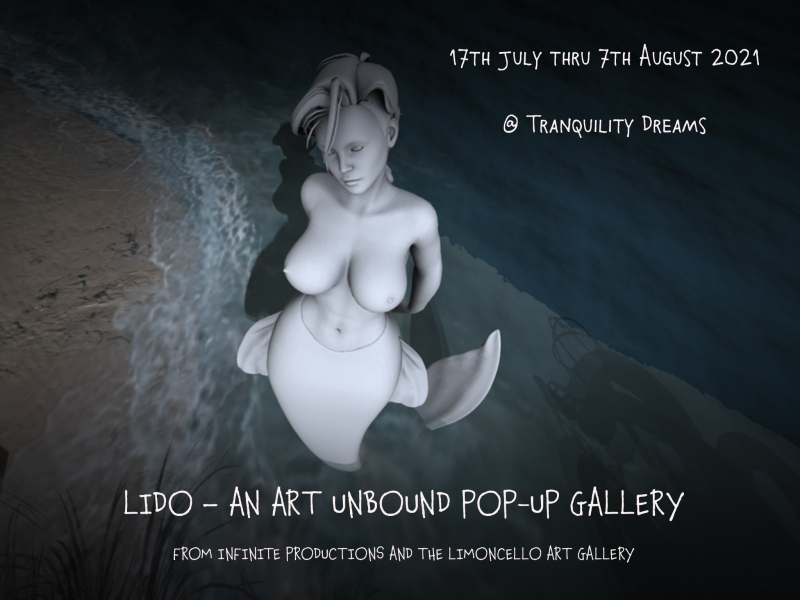 Our partner Infinite Productions has secured a location for the next ART UNBOUND pop-up gallery. It’s a windswept beach location in the Tranquility Dreams region. We’re now putting together a roster of artists to supply new content to exhibit alongside works on loan from the Limoncello Gallery’s permanent collections.

The show will be called LIDO and will run from 17th July to 7th August. The opening party will be on 17th July at 7pm SLT. Save the date!

ARTIST IN FOCUS
We are happy to have some beautiful works by Thus Yootz in our collection. They can be found on the 9th Floor and the 11th Floor of the LG Tower. Thus is from Athens in Greece and has an MA in Art after a total study of ten years of drawing, painting, etching, sculpture and photography. She has taken part in many group art exhibitions in Greece. Her SL photography can be seen here and here.

She's also a wedding planner in SL, and a region designer, landscaper and terraformer. Finally she has a business selling her own trees and plants! Fenella caught up with this busy SL polymath to interview her about her art in Second Life®.

Q. What first brought you into SL and how long was it before you began to create art here?
A. A friend I was looking after was joining SL and introduced me.  I knew nothing about it. Six months later, when a friend taught me the very basics of SL building, back in 2009, I made my first attempt at a painted sculpture that I still cherish.

Q. What’s the balance between RL and SL tools in the making of your work?
A. The SL capture must inspire me — the magic of other creators' dreams — captured by my perspective and then, each capture guides me, often in combination with RL artworks.

Q. Who are your artistic influences, in RL and in SL?
A. I adore a zillion artists in RL from ancient Greece, tribal art, to the Renaissance and to date.  They have all influenced me a lot. I have spent long hours since I was a kid admiring and contemplating their amazing artistic creations. My studies at the Athens School of Fine Arts also shaped my way of looking and how seriously I take art,

Q. In your view, what’s the best thing about art in Second Life and what’s the worst?
A. Lack of originality, not only in art but in every aspect, is the worst. Once a recipe works, everyone repeats it.  Even in creating sims, which I also consider an art.  Sure, we take from others, but we must create our own individual  vision, express our personality.  It bores me. It is hard to find original and creative places to make pictures, even !  Same with imagery. The best is that art connects us, it expresses us, it gives us the opportunity to be creative, which is a huge gift!

Q. Finally, what inspires your art?
A. The beauty I see. 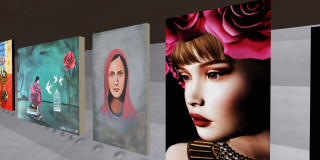 This week we acquired three new paintings by Fenella's friend and colleague at the BBB, Ghost (theghostofghost). All now hang on the 5th Floor of the LG Tower and are called Self Portrait - Biography, Art : The Beginning and Art: New York.

Dave discovered a new artist (to us) called Amanda Tomasoa (AmandaT Tamatzui in Second Life®). He bought two of her works called Woman with red scarf and Freedom From Within. Both now hang on the Lower Deck of the Airship Limoncello.

As does a new work by one of our old favourites, Yoko Ayukawa, called Mermaid of the Sun. We can never resist a good mermaid and this one lured us right onto the art budget rocks.

We bought a beautiful portrait called Girl With Flowers In Her Head 1, by Angel Heartsong. That is also to be found on the Lower Deck of the Airship. As is The Dance, by Al (alurcha.niekerk) and Blue Sandals, by Phrynne.

It has been the biggest – and most expensive – week for new acquisitions in a while. We hope you enjoy the new items in our collection as much as we do. Let us know what you think in the comments or by IM to Fenella (Fenella.Allen) or Dave (Lord.Junibalya) in-world.