Work continues on our new pop up exhibition LIDO – co-produced with INFINITE PRODUCTIONS and due to open on 17th July. There will be new work by Cate Infinity and Esta Republic. There will also be works by Milly Sharple, Jaelle Faerye, Tani Thor, Aquarius Lowtide, Ohsoleomio, Vanessa Jane and Gitu Aura on loan from the Limoncello Art Gallery's permanent collection. There will be a special stamp available for your Bellisseria Passport.

The opening party is at 7pm SLT on July 17th. Music will be provided by the ever-original Manx Wharton and DJ Vivienne Dufaux so get ready to dance on the beach amongst the art. The dress code is beachwear or mer!

Speaking of Cate Infinity, the opening party for her new gallery was last weekend. Sadly Fenella was away in RL and could not be there, but the event was a stunning success. Cate reports;

Art patrons showed up from all over the grid. It featured musical and eccentric acts from Manx Wharton and Poppy Morris. Manx Wharton's remix of Depeche Mode and Death Cab for Cutie was brilliant and entertaining. Poppy Morris performed industrial noise using her vocals and loom and it was transcendental.

Infinite Art Gallery reveals its artists undying commitment to art as a universal language and catalyst for unity. It seeks to foster inner creativity and talent towards an optimal SL experience. Cate Infinity displayed 2 limited edition artworks at the opening entitled Explosions of Fear and Explosions of Consciousness. 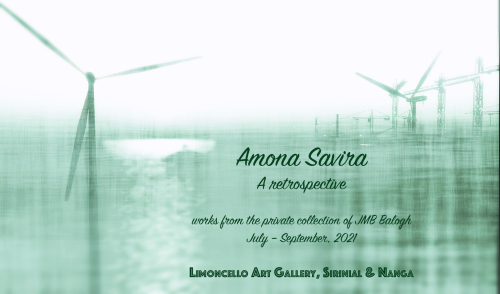 Our Molly Bloom show has come to an end, so it's time for our next special exhibition. Amona Savira was a Norwegian artist who, despite modestly denying that she practised "art with a big A" in SL, built up a considerable following. Sadly she is no longer with us, having died in February of 2017.

Amona went to art school in RL and had a degree in art history. She started her Flickr account in 2010 and traveled all over SL taking pictures. She moved on from landscapes documenting those travels to what she considered "more artistic projects" – including avatar portraits. She often served as her own model.

Such was her reputation in the SL art community, that her memory was honoured in the year of her passing with a retrospective exhibition at the prestigious DixMix Gallery. We think it's time to remember her contribution once again. Thanks to our friend Jo (JMB Balogh) who has a good selection of Amona's work in her inventory, we are now able to stage our own retrospective in the Jishnu Room for Special Exhibitions at our home gallery in Bellisseria. We hope you enjoy it as much as we do.

Our thanks to Jo for lending us these special works of art for all to enjoy. This is the third consecutive special exhibition drawn from the Aladdin's Cave of her inventory. She also loans us the works in the Balogh Collection at the LG Tower.

You might like to check out Jo's own SL work at her Seaside Gallery in Nestor. For a long time she's been doing beautiful work in her own right. Her Flickr page is here. Take a look!

Fenella was lucky enough to be invited by Dido Haas to preview the July exhibition at her Nitroglobus Roof Gallery. It's called Baptism of Fire and is the Second Life® artistic debut of Mihailsk, a Greek photographer with a distinctive style.

The images on display are all monochrome and feature the artist himself as model. They are simple, almost stark, and yet both dramatic and painterly in style. Challenged by Dido, who first found his work on Flickr, to travel inside himself  to make works for this exhibition, Mihailsk says;

I accepted that challenge and tried to express thoughts and emotions, using only my body and the presence or absence of light. I dared to make myself the main subject of my frame, something I usually don't do. Without colors, mostly without unnecessary objects, the more I traveled the more discoveries I made.

Dido – as always – has a great eye for new talent and Baptism of Fire is an impressive debut. We recommend it to you. You can see more of Mihailsk's work on his Flickr photo stream.

Given our favourable review (above) you won't be surprised that we bought a photograph from Mihailsk's Baptism of Fire show. It's called Remission and now hangs on the 12th Floor of the LG Tower.

I love to read that RL artists find ways to show their RL work in SL especially when visiting galleries and openings in RL have been compromised during the COVID-19 pandemic. Hard to imagine that we took such luxuries for granted only two years ago.
We are so lucky to be able to enjoy art and music in SL. I’m so thankful for this platform and for the artists and curators who work tirelessly to promote installations and exhibitions to enrich our lives and remind our hearts and minds that the arts are an important tool of communication and an outlet of expression conveying emotions and reassurances to the world that we are not alone and together we will find a way to cope with such changes as they present in our path. Life is a journey to be embraced. Every moment is precious. Enjoy SL 💕

Well said, Bjoyful. Thank you for your comment. And thanks also for all you bring yourself to SL and its residents. You're a star.