Edition 27: Lido is ready to launch

LIDO - AN ART UNBOUND POP UP GALLERY IS READY TO OPEN 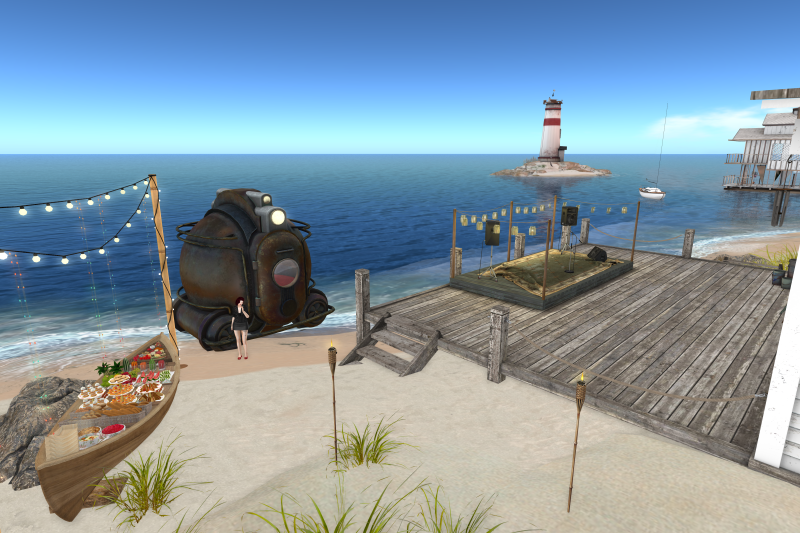 The stage is set for our opening party and a space has been prepared for arty Time Lords to land their Tardises. Fenella is pictured with her Tardis – landed in a suitably maritime form! The Bellisserian Bureau of Bureaucracy terminal to issue a special commemorative stamp for your Bellisseria Passport is already in position and working. 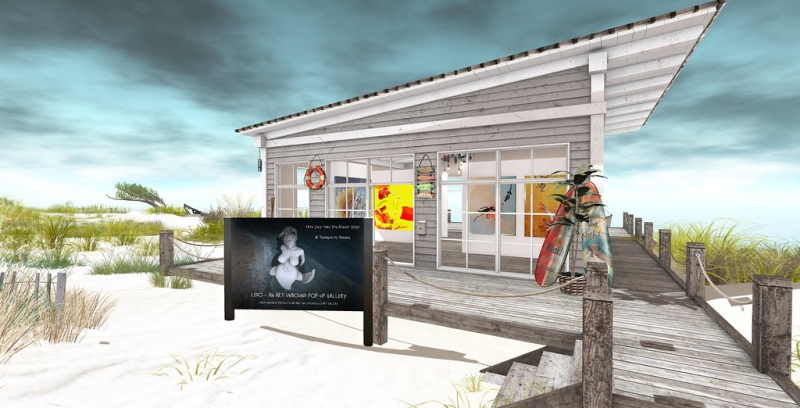 The art is also in place, both in the beach shack on the ground and in a sky box accessible through a door inside. We hope to see as many of you as possible at the opening party at 7pm SLT on July 17th. An invitation has been sent out to the Limoncello Gallery mailing list, the Infinite Gallery Group and other selected art groups in-world. If you haven't received one please IM Fenella Allen or Cate Infinity in-world. Dress code is beachwear or mer. In the meantime the exhibition is open for previews.

Our editor, Fenella, is 14 next week and is combining a rez day party with a house-warming for her new dacha near the Limoncello News offices in Campbell Coast. All our readers are welcome. The party starts at 1pm SLT on the 21st July  and an invitation was included with this week's notices of publication.

It's a garden party. Dress code is smart casual. Music will be provided by DJ Female. See you there! Please RSVP directly to Fenella Allen in-world. 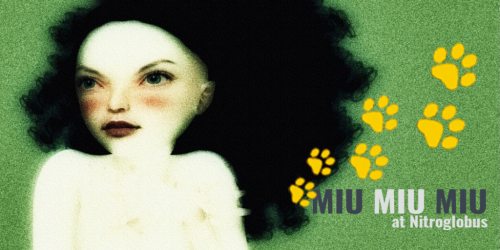 To the extent that we at the Limoncello Gallery have any artistic ability ourselves, it's as photographic portraitists. We agree with the poet that "the proper study of Mankind is Man" and particularly enjoy portraits – not least the challenging kind made in Second Life® of avatars that (even when actually in human form) lack the natural expressions of real humans. There's a very specific art to making them live in an image.

Therefore (at the risk of returning too often here to one of our favourite other galleries in SL) we particularly enjoyed Miu Miu Miu's Stamp at Dido's part of the Nitroglobus Roof Gallery.

Miu Miu Miu, whose Flickr feed is also worth your time to check out, casually observes in the exhibition notecard that

I found some images in an old folder, which I had not posted or exhibited on any platform. When Dido offered me an opportunity to display these images on the walls of Nitroglobus, I was only glad to accept! Thank you, Dido! <3

If there was work of this quality lying in our inventory, we think we would have exhibited it. That it was lying forgotten in Miu Miu Miu's says something about her effortless talent! We recommend you visit the exhibition and check it out yourself. 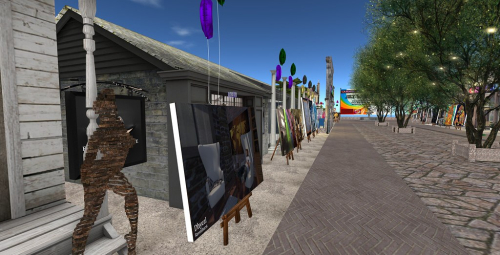 Our other recommendation this week is the Carmel Summer Art Fair, now in full swing at the SL representation of the city in California famous for its connection to the arts. The fair opened on 5th July and runs to the 25th. Drop by our office in Carmel and you'll find all the the art on the streets outside.

Fenella was part of a photoshoot at the Bellisseria Bureau of Bureaucracy (where she has a side gig as editor of the BBB Gazette) to get a group shot of the entire team. It was fun and so she decided to shoot one of the Limoncello Gallery team. So here are (L-R) Dave, Fenella and Tom. Dave owns the gallery, Fenella is co-curator and the Editor of Limoncello News and Tom (now only slightly active in SL) is the founder whose art collection began the whole project way back in 2007. 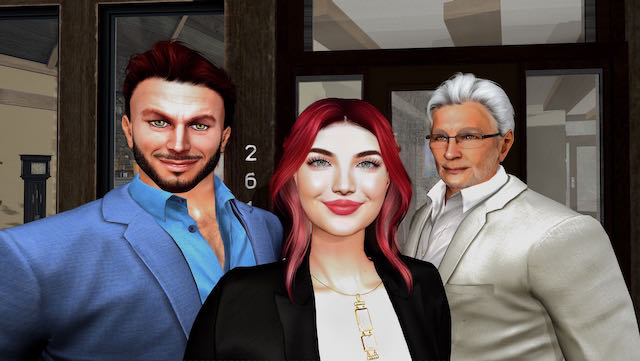 Our new artworks in the collection this week include Pistachio, by miu miu miu (miumiumiusecond), which Dave bought when he visited her exhibition reviewed above in Elsewhere on the Arty Grid. It now hangs on the Lower Deck of the Airship Limoncello as do two new works by Moni (monique.beebe). They are 3 women and Plastic People. Plastic People gives its name to Moni's half of a current joint exhibition with one of our favourite artists in SL, Traci Ultsch. The exhibition is at Kondor Art Square and is called Dead Cities & Plastic People. While Dave was visiting, blogger Inara Pay was standing silently there, plainly AFK. As he was hanging his purchases, she settled his curiosity as to what she was up to, by sending a notification of her review of the exhibition.

By the way, if you are interested in collecting SL art yourself, this exhibition would be a very economical place to start. Moni and Traci both have their works on sale there very cheaply. Moni says of hers:

If you want a copy of one of the pics please be welcome and get one. I had to set a price and put it on L$1. There is no way I have to earn on my work. it is already an honour if you take a copy of it.

There is no reason for your home in SL to be bereft of good art. Traci and Moni are fine artists and their generosity here should neither be underestimated nor missed out on!

Until next week, Limoncello Friends, be arty!