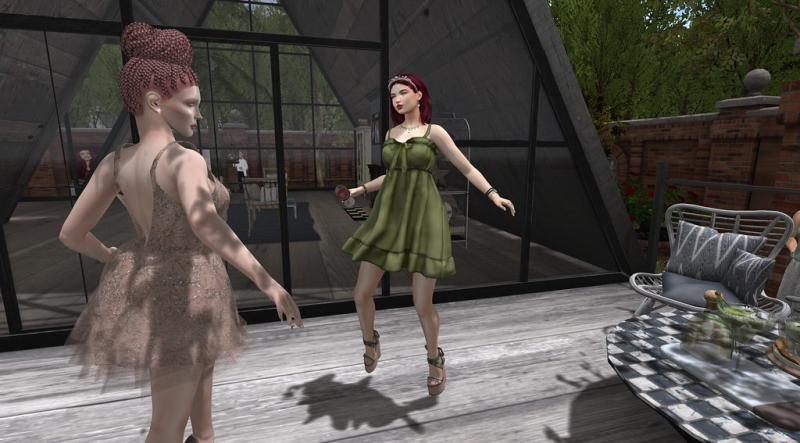 This is not strictly gallery business, but our editor Fenella wants to thank all of the Limoncello Friends who came to her Rez Day Party. She had a wonderful time and hopes you did too.

ELSEWHERE ON THE ARTY GRID / ARTIST IN FOCUS

This week, we feature three galleries and one portrait studio – all in the same region and owned by the same artist; Anja (neobookie). Anja is one of "our" artists so this qualifies as one of our occasional ARTIST IN FOCUS segments too. Her works in our collection are to be found on Floor 5 and Floor 9 of the LG Tower.

She has had her own gallery for a while but has worked hard to rebuild it as four separate venues. They are the No Walls Art Gallery, Xplore, FoYer, and her Portrait Studio. All are connected by teleports so it's easy to see them all on one visit. Fenella  interviewed Anja as she showed her around.

F: Can you talk our readers through the four concepts please Anja?

A: Yes, of course. Firstly, FoYer. A foyer is an entrance hall to a building. My idea is for this gallery to be an entrance into the world of SL art. A starting artist can show seven pieces of work there for free.

F: So it's a kind of incubator gallery for new artists; like we had at the Limoncello Gallery in our early days?

A: Yes, though a more well-known artist could also use it as a try out space for a new concept or direction. I was given a lot of support from an established artist when I began my art career in SL. I would like to "pay it forward".

F: That's great. Who is your first FoYer artist and when is the opening party?

A: The first exhibition will be of works by Smilla. She's been in SL since 2007. She has spent much of her real life landscaping, sculpting and stone cutting. She's also a photographer and musician so it's not surprising she felt the need to express herself here as well. I think people will enjoy her work. We don't plan to have official opening parties for FoYer exhibitions, though the artists can invite whomever they like.

F: That's a shame – I love an opening party. Well actually I just love a party! So how does an artist get into FoYer? Will you approach them or can they apply?

A: If I spot some talent, I will suggest it myself - as I did with Smilla. If people want to send me links to their work, I am also happy to hear from them. It's a small space and I don't want this to become a job, so I hope they'll be patient and accept that I won't always be able to help.

F: That's understood – and what about your other spaces?

A: Xplore is for a series of exhibitions of my SL travel photography. Each one will feature six photographs from a single region. I will change the exhibitions every eight weeks or so. The first features Ruegen, which the owner calls "an attempt to depict the landscape of the beautiful Baltic Sea island of Rügen".

F: It looks very beautiful in the photographs. I can't wait to visit it. I had the chance to speak to the owner, Andre, and he told me that:

F: And I agree with him. The world looks better through your eyes, Anja!

A: I thank both of you for those kind words! The third gallery is of my own original SL artw0rks and is called the No Walls Art Gallery.

F: Most of our readers are familiar with your work, Anja. Especially since the success of your exhibition Anja's Surrealism at Nitroglobus Roof Gallery, which we reviewed here. What about the fourth gallery?

A: The fourth space is not really a gallery but a working studio for my photographic portrait work. I love to take portraits and people like photographs of themselves for their SL homes or profile pictures.

F: Thanks, Anja. I have some of your portrait work at home and I love it!

We strongly recommend you take a look at all four locations and we applaud Anja's generosity in trying to help other artists make a start. All the SLURLs you need are in the various links above. We are grateful to Anja, who has two busy lives, for giving us so much of her valuable time.

UPDATES TO OUR DIRECTORY OF ART GALLERIES IN BELLISSERIA

There are two additions this week. Please take a look. If you know of other galleries in Bellisseria that are not yet listed, or if you are opening a new gallery, please advise us by IM or NC to Fenella Allen in-world, or by clicking on the email the editor link under Contact Us in the sidebar.

Please note that we will only list non-commercial galleries. Any attempt to sell art in Bellisseria or to solicit donations (whether for personal profit or otherwise) is in breach of the covenant. It's not our job to enforce it and we won't be filing any Abuse Reports ourselves, but we won't send people to a place where they might feel obliged to do so. 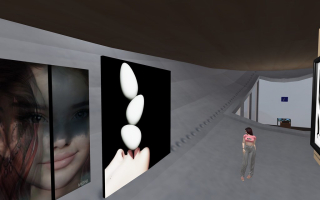 Fen admires one of the new acquisitions (click to enlarge)

We have five beautiful new photographs by Hermes Kondor on display on the Lower Deck of the Airship Limoncello. They were a personal gift by the artist to curator, Fenella Allen, for her 14th Rez Day. She wanted to share them with our visitors and Hermes kindly consented. The photographs are called A Road To Nowhere, Faces, Her Hidden Side, Hidden Face and Memories.

Fenella received other gifts of art but they are no copy items and she is going to hang them in her own home. Maybe we can persuade her to lend them in future. In the meantime, she loves to entertain so feel free to invite yourself for coffee if you see her online!

We also bought Egg on my face by Edie Horngold this week and hung it on the Lower Deck of the Airship Limoncello. It's at the front of the ship, near to the control gondola.

Not that she flies around much these days – she's permanently moored above the LG Tower – but that was where the captain and crew used to work in the days when airships like this connected Europe to South America in real life. They are mainly remembered now for the catastrophe that (together with the advent of the airliner) brought millions of safe air miles covered by such vessels to an end.

We at the gallery remember what fun we had trying to fly the AS Limoncello in SL. The last flight was a stately descent to the ground this year to be de-rezzed before being rebuilt in mesh. In her old form of 745 prims she was – at 124 metres long – the largest moving vehicle on the grid when our founder Tom bought her in 2007.

It was impossible back then to link so many prims so the controls moved an invisible model to which various prim-sets were linked. They followed the model, clumsily and often in stages. The effect was more comic than convincing, but one had to admire the maker's creativity in thwarting SL's limitations! At that size, the sim-crossings (sorry Patch, region-crossings) came thick and fast. They  usually ended in disaster, one way or another. Only the contents for which Tom had mod rights could be linked to the ship. Even a successful voyage had a tricky conclusion as he manoeuvred her back into a position where the art-works hung correctly!

Her present life is a calm and peaceful one. Most visitors don't even think of her as a craft, we suspect. But she carries as ghostly passengers many of our SL memories.