A new space for artists has appeared in Second Life® – Elven Falls. It's a former fantasy RP region now landscaped and rebuilt to house galleries. Fenella met gallery manager Aires Hax there and was impressed by his enthusiasm. He is personable and chatty – always in voice. She ran behind him trying to keep up to hear all he had to say about the region's planned development!

The owners are RL artists and this is a philanthropic venture. Rents are low. For approved new artists, there are free street locations. Either way there are no commissions on art sales. There's street art on the walls and sculptures in the parkland. There is affordable housing for artists to rent – with a clear intent to make this a creative community. The Elven Falls Gallery itself stages regular exhibitions and also allows exhibitors to sell at zero commission.

The project is on a serious scale and growing. It has clearly been given much thought. Sisi Biedermann, Zia Branner and Jaëlle Faerye have already opened galleries. Art Korner is also there; displaying some of Frank Atisso's personal art collection. 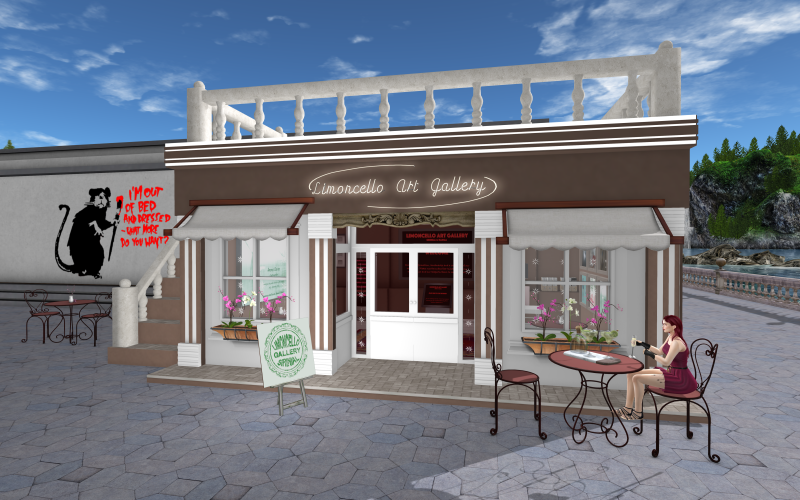 The Limoncello Art Gallery is happy to be part of this exciting new venture. We've rented a rep office/cafe near the landing point. Please stop by to have a coffee and a cupcake while you check out what's going on with us. As always at our locations, there's a Tardis landing spot nearby. Set your navigation console to Elven Falls! 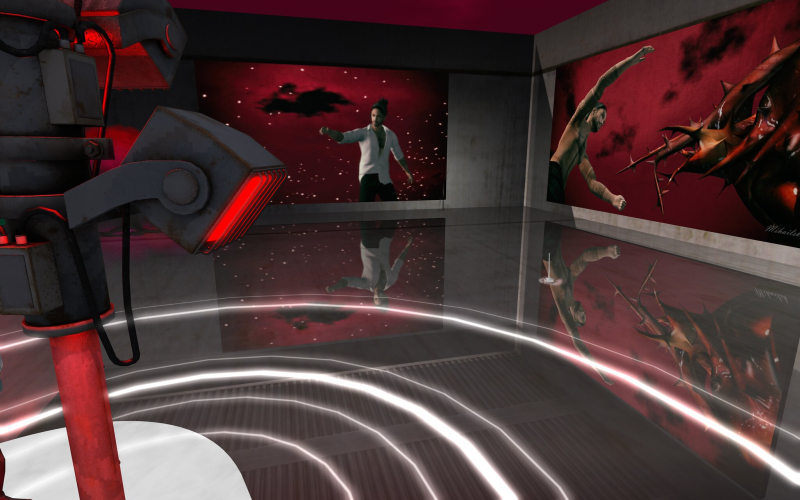 There are two new exhibitions at the Nitroglobus for September. The first is Red Sky by Mihailsk in Dido's part of the gallery. Mihailsk says of his show;

The color red symbolizes intense situations and emotions but at the same time it indicates warning and danger. My red sky is a sky which reflects strong human emotions, covering them like a blanket and thus giving a sense of safety and hope.  Danger, longing, visualization, power, love, pain, balance, joy.: eight human moments under the red sky.

This is Mihailk's second exhibition in rapid succession. His debut exhibition, Baptism of Fire, was also at Nitroglobus and we reviewed it in Edition 26.

Dido has dressed the space with red light poles, red/purple trees and glowing clouds under the floor. The staging sets the artworks off perfectly.

The other exhibition is by Dido herself in the main gallery and is called One Day. It takes its title from a poem, Amoretti LXXV, by Edmund Spenser.

My verse your vertues rare shall eternize,
And in the heavens write your glorious name:
Where whenas death shall all the world subdue,
Our love shall live, and later life renew.

It's poetry as seduction; winning the target over by the promise of immortality. Just as with Shakespeare's various inamoratas in the sonnets, however, it's the poet's name we remember! 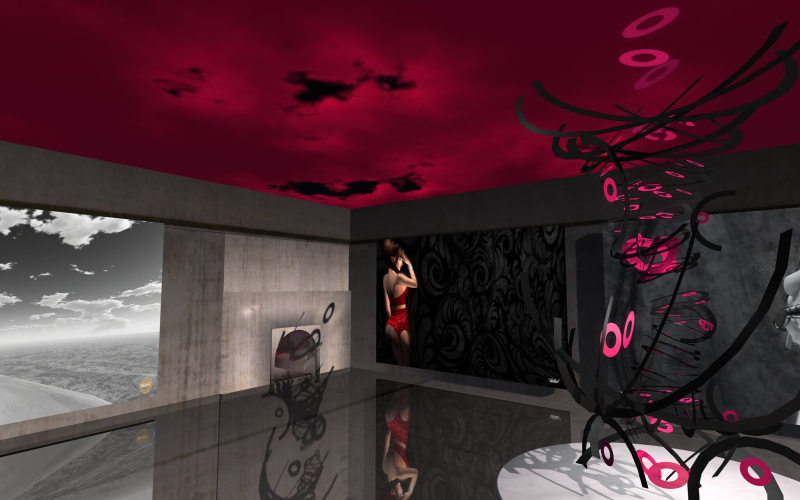 We have known Dido Haas a long time in SL terms. One of her works is among the earliest pieces in our collection. In 2012 she and her late SL partner Nitro started Nitroglobus Gallery and most of her SL time has been dedicated to curating and promoting exhibitions by guest artists. She says;

Being so busy with curating I had little time left to make photos myself. When I do, my pictures showed visitors, exhibitions and parties at my gallery. But sometimes when I am in the right mood I do make photos, most of them black/white and portraits or avatar studies.

So, an exhibition by Dido herself these days is a rare treat and not to be missed. We have enjoyed her photography and appreciate its characteristically romantic tone. Dido mentions love a lot. At some level it is a presence in everything she does.

This week we acquired quite a few new artworks. Dave took the monthly tour using the Focus Art HUD and bought Persona - 049, by Hermes Kondor. That now hangs on the Lower Deck of the Airship Limoncello. He also bought Posing Nude and Painted Beauty, by Kraven Klees, Awesome FACES 10 and Awesome FACES 12, by Awesome Fallen. Finally, he bought Lust for Life by Maloe Vansant. All of those are to be found now on the 12th Floor of the LG Tower.