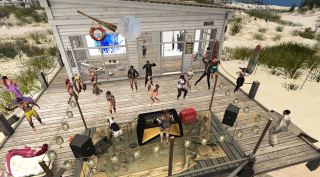 The opening party last Saturday for Lido — a pop-up gallery co-produced by Infinite Productions and the Limoncello Art Gallery — went swimmingly. This is the second pop-up in the ART UNBOUND series; this time in a fishing shack on a beautiful sandy beach.

The event was well-attended, people loved the exhibition, DJs Poppy and Vivienne did a superb job and we all had fun in each other’s company.

Your editor Finella presided, tailed and scaled, from a clamshell throne — waving her fins to the music while greeting and chatting to guests. Cate Infinity of our event partners Infinite Productions and the Infinite Art Gallery danced happily in her bikini, while fielding questions about the art works and directing people through the portal to the delightful sculpture beach.

It was so obvious that were having fun that Bellisserians who just happened by to collect the special edition stamp for their passport stayed to party! 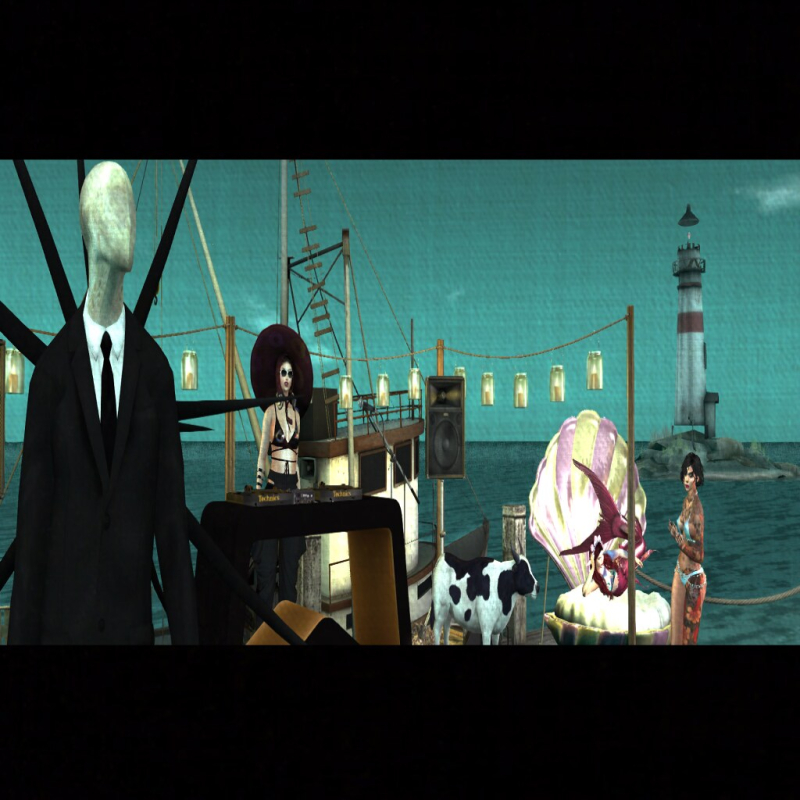 Speaking of Bellisseria, despite the fact the party wasn’t there, the Bellisseria Slenderman made a surprise appearance — presumably because  the Limoncello Art Gallery is a Bellisserian institution. We’d say that was kind of him but he has an evil reputation to sustain — kindness is not really Slendie’s thing!

There are more pictures to be seen in the ART UNBOUND Flickr Group.

Frank Atisso wrote a great review for his Art Korner blog, which captured the essence of what we are trying to achieve in taking art out of its “temples” onto the SL road. Frank made an appearance at the party so we had the chance to thank him in person

The exhibition now continues until August 7th. If you haven't seen it yet, please head over there and bring your friends. 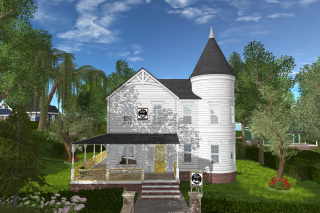 Rather than go to one of the blockbuster SL art galleries this week, we set out on a project dear to our hearts. Linden Homes in Bellisseria are designed to be just that - homes. They are domestic in scale and mostly rather suburban (although the new Fantasy Theme will bring a new dimension). Yet the ethos of Second Life®  – always a world made by its residents – leads some to dedicate their homes to other purposes.

If you check out the new Bellisseria Parade of Homes Review blog, you'll find show homes occupied as intended in all of the available styles. However you'll also find Resident-owned Places of Interest. These are buildings open to the public – not to show off the owner's classy taste in interior design or landscaping – but as public resources.

The Bellisserian Citizens Group HQ and the offices of the Bellisserian Bureau of Bureaucracy are good examples, but the Limoncello's Main Gallery in Sirinial on the Squishy Pickle sandbanks is not the only art gallery on the Linden Continent. We decided to tour all of them and provide you with SLURLs so you can support these public-spirited Bellisserians in their artistic endeavours. We've collected the information on a directory page for Bellisserian Art Galleries to serve as a permanent resource.

There will be work involved in maintaining and updating this resource. We hope that you will help us by visiting the featured galleries and letting us know about any errors or omissions in the listings. It is perfectly possible that there are more galleries out there in Bellisseria. If they are open to the public, please let us know!

These resident gallerists are philanthropists and we'd like to support what they do. The directory page is now in the sidebar and we are happy for other SL art galleries, websites and blogs to link to it as they please.

We are fans of the longest-running sci-fi show in the world, Doctor Who. It first appeared on TV screens in 1963. Its eponymous hero is "the Doctor" – a renegade Time Lord from the planet Gallifrey, who roams all time and space in a stolen time ship called the Tardis. This ship (the name stands for Time And Relative Dimensions in Space) is one of the cleverest constructs in all science fiction. It has a chameleon circuit so it can for example disguise itself as a pillar on landing in Ancient Rome. Even more impressively it is "dimensionally transcendent", which means it's bigger on the inside than the outside.

In SL Tardis owners rez an "interior" somewhere on their land (or temporarily in a sandbox) and then land the "exteriors" in various forms wherever they have the rights. Exterior rezzers can be set to public use so every SL Tardis can land there.

Why mention this here? Though one of our favourite episodes involved the Doctor meeting Vincent van Gogh, the art connection is not obvious. Every location of our gallery welcomes visits by Tardis. We think SL's Time Lords would appreciate being able to visit other art galleries by Tardis too. If you own a gallery and would like to make this possible, just contact Dave or Fen. Lend them a tag to rez on your land, tell them what name you would like to appear in Tardis navigation systems and they will place the necessary rezzer! Don't just get visitors from more places, get them from more times!

Fenella had the pleasure of meting Cica Ghost this week, having been introduced by a mutual friend. We had resisted the temptation to buy her amazing horse sculptures currently on exhibition because they were so primmy. However Cica explained the ones on display at her region are enormous. At normal size they are only 4LI each. So we are delighted to say that now  "Cica's Horse 8" and "Cica's Horse 10" are on display in the grounds of the LG Tower.